This Week at The Infants’ Home 9 August – 13 August

The children in Gorton House Preschool have always enjoyed cooking and it has been a regular part of our program and an area that every Educator engages in with enthusiasm.

Over the past weeks, we have begun to include various spices, (curry powder and soy sauce are a bit of a hit at the moment) and our Educators and children come up with interesting recipes, often making use of leftover food so that it doesn’t go to waste. All leftovers taste great cooked over the campfire!

We engage in discussions about nutrients, and their impact on our bodies. We discuss the particular foods that may offer those nutrients, and raise awareness of some nutrients that are present that are best had in smaller amounts, such as sugars and salts.

Over the past weeks the children have made their own nori rolls, enjoying traditional additions such as tuna, carrot, rice and a touch of soy, while also being somewhat creative and adding pear (one child’s favourite fruit—it was an amazing hit with everyone!), as well as lemon juice brought in by a family who had an abundance of lemons growing on their tree at home. We have barbecued leftover meatballs over the fire, which was a huge success, and made apple pancakes, which were the fluffiest we have ever tasted. We also experimented with marinating potatoes two ways, some in curry and others in a dash of soy, and then roasting these on the campfire. Some children still talk about these potatoes as being their favourites so we will try that recipe again and we’re sure the fresh chives, picked from the toddlers’ garden, added to their flavour.

We also mixed some left-over rice with some corn and peas and added some curry powder, then rolled them into balls and cooked them over the fire. Although one child loved these, she picked out the peas as she was horrified at the thought of eating peas! However, a couple of weeks later, she began to consider actually trying a pea and one day, sitting down to a lunch made by our lovely chefs Charoen and Lisa, she announced she was going to do it—she was going to try a pea! We waited with baited breath and applauded her bravery at trying something that she would normally describe as “yukky”. The verdict? She thought it was ok and she might try them again another time. We believe that for children who find some foods difficult, the repeated exposure to these, coupled with handling these ingredients in cooking, and watching and being involved in the entire process of food preparation (and of course having a sense of control over when and how they might feel comfortable trying these without pressure) will contribute to confidence to finally try and possibly even enjoy these foods.

A parent, whose child took her enthusiasm for cooking at preschool home with her, emailed Educators to share her feelings about all of the cooking occurring in the preschool room. She said, “I love that you are getting [my child] involved in cooking, it is encouraging her to try new foods which she needs! I love cooking so it was lovely to have a little buddy who was very keen to help”. It was so rewarding to hear that!

We love the way we have further incorporated food and cooking into the program over the past months, and we have used the fire outdoors even more often than the kitchen! We have re-modelled and embedded an awareness of food safety, hygiene, nutrition and food sustainability, talking about minimising food waste and discussing foods that are safe to re-use and those that are not, and how to store these safely in the meantime. A wonderful learning curve for everyone. 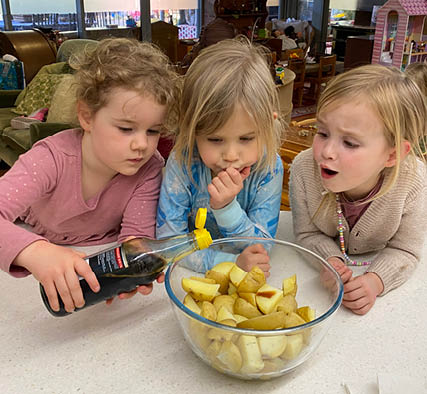 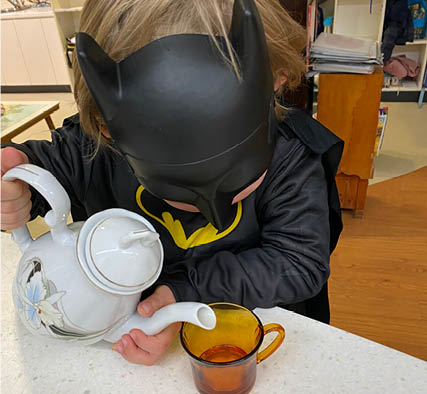 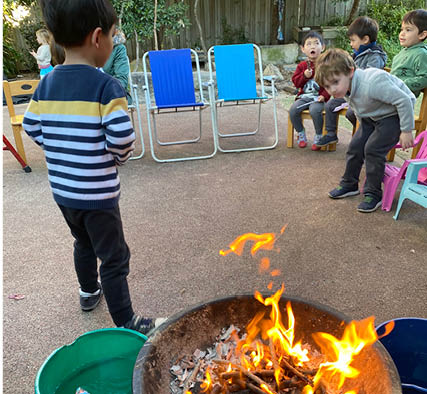 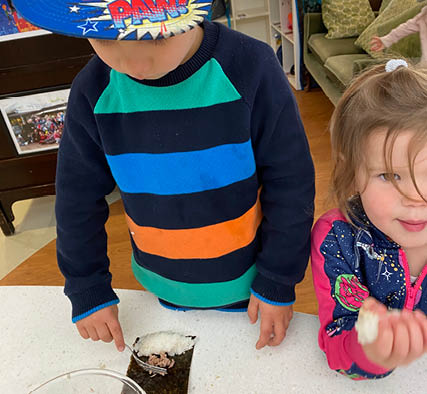 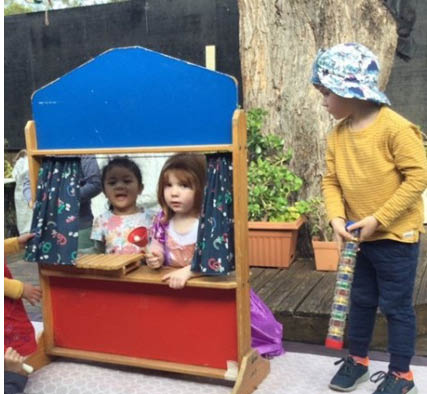 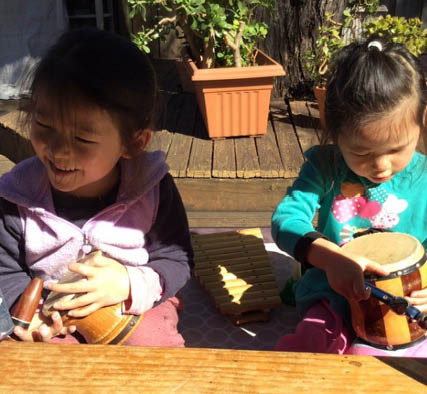 The children at Rigby House are interested in firefighters, and every day they request their favourite stories about firefighters to be read. To extend on their interest, Educators have provided the children with opportunities to participate in dramatic firefighter play experiences.

The children helped to make the props they use to play. They painted the fire, which was placed on our storage shed, then made water hoses with cardboard tubes and coloured paper. As the children played they demonstrated their knowledge of what firefighters do and what a fire could be like. As they played they made “siren” sounds, reminded each other that the fire was “hot and not to touch”, and to put “lots of water” on the fire to extinguish it.

Numeracy and literacy were included in the play. A large keypad was placed on the wall, and as the children played they rang “000” to call the firefighters to come and put out the fire that was burning our shed. 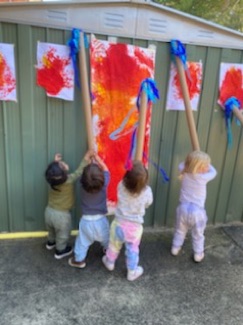 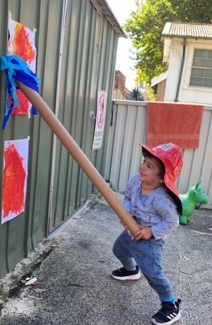 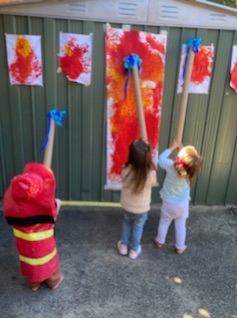 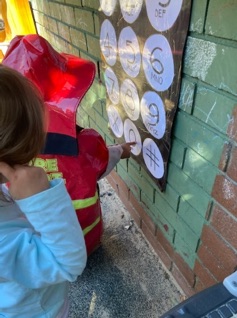 With plans for Robinson House Olympics 2021 underway, the children have been practicing for events such as relay and hurdles. Today we began practicing for our high jumps, with the children jumping over a bamboo stick balancing on two cones! It was great to see the children give it a go so enthusiastically, and some were demonstrating flips as they jumped over the stick! The children were encouraged to tuck their knees in as they jumped over the stick. The bamboo stick may have fallen a few times, but that didn’t stop the children from showing their perseverance as they tried again and again!

It was also lovely to see the children cheer and encourage each other!

Do you believe in fairies? 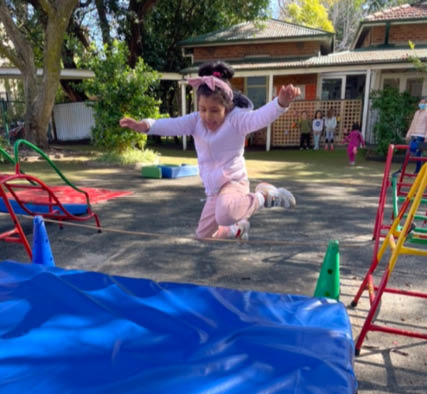 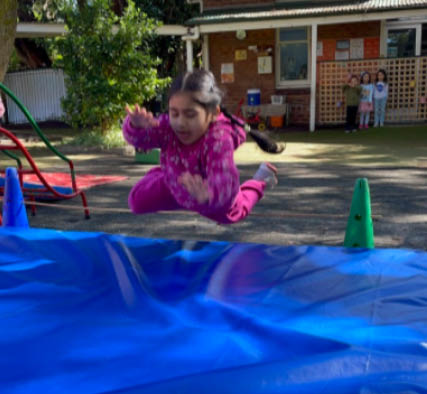 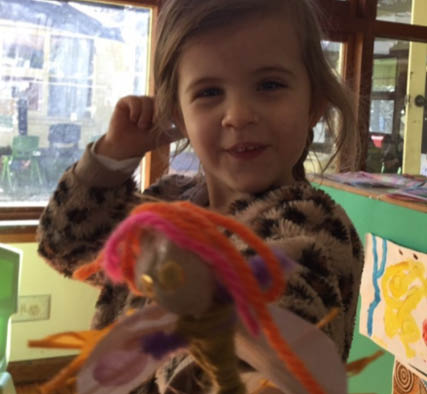 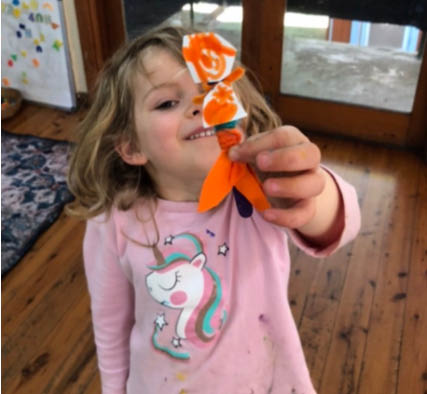