Meaningful learning opportunities that stem from children’s contexts and interests are the foundation of our pedagogy within the Gorton House preschool room, and we celebrate how the children’s agency and identity are most frequently the catalyst for planning and learning within our program.

Our children know that they influence planning decisions, and this was evident when one of our children approached their Educator Gunjan a week ago and told her that she wanted to make some Diwali decorations to post on the front door, informing everyone that it was nearly Diwali. Another child approached and said, “I do Diwali at home too”. Gunjan (who also celebrates Diwali) asked the children to tell her how they celebrate at home, as she wanted their home experiences to influence what we did in preschool. They told her, “We decorate our house, we put up lights, we cook yummy food”. This conversation triggered a lot of discussion around ‘diyas’, which are little clay pots that are filled with oil then lit with a flame. Gunjan also shared with the gathering children how she celebrates Diwali at home with her family.

Whilst all of this was occurring, the children were creating a banner they proudly displayed on the front door. In the lead up to Diwali, Gunjan brought in some diyas, which she showed the children, and they shared what they knew about how these would be used, and later decorated these using colourful paints. By now, everyone’s interest was piqued, so Gunjan helped the children mould their own diyas using salt dough. The children eagerly moulded the diyas into star, flower and other shapes and they were then baked to harden them. While baking the diyas, the children and Gunjan shared stories around their experiences of Diwali.

Over the course of the week, Gunjan and other educators and the children gathered to light the diyas. We shared little snacks, and Gunjan told the story of the 10 headed monster that was slayed by the God Ram. One of our children, perhaps in response to our talking about this God, knelt, hands held palms together, with her head bowed in prayer; she prayed like this in front of the diyas for some time. This triggered some discussion about praying, and who or what people may pray to. One child told us their family prays to Buddha, while another told us their family prays to Jesus, and we discussed how people may pray to a vast many Gods, (Gunjan told us she prays to many Gods). We also added that some people don’t pray to or believe in Gods at all, and that all of these differences in beliefs are normal!

We hope that through these discussions, we foster in children a sense of respect for self and others, and acceptance that we can all be similar and different in many ways, including in our family beliefs, and that who or what we may pray to (or not) is just another way in which we can vary. The important thing is to know what is important to you, and to respect similarities and differences in others. 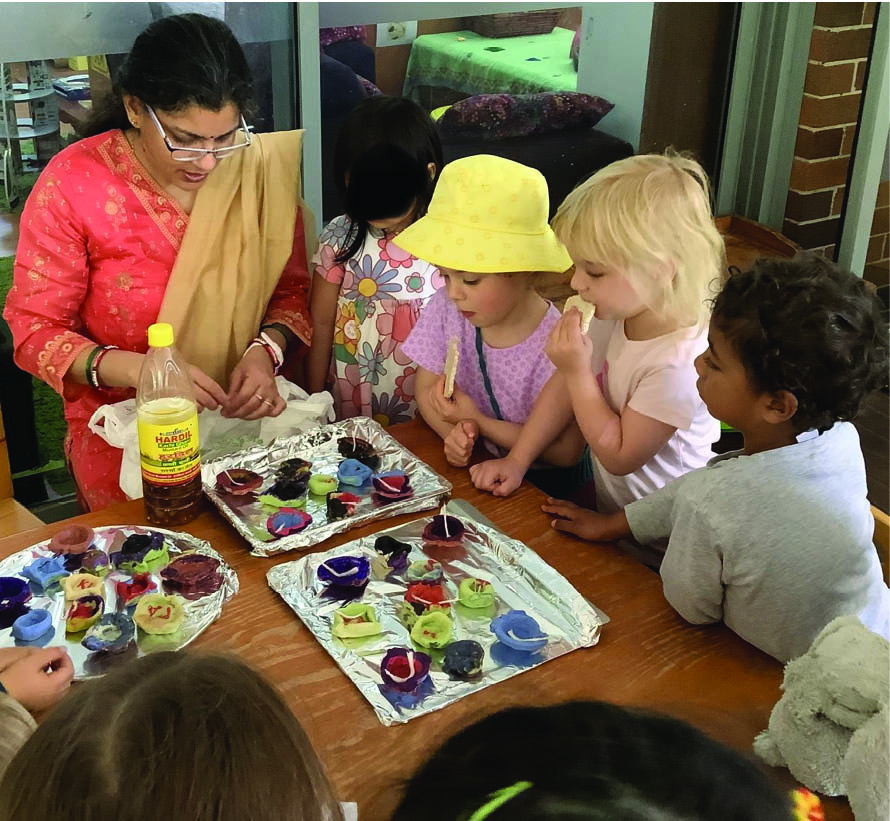 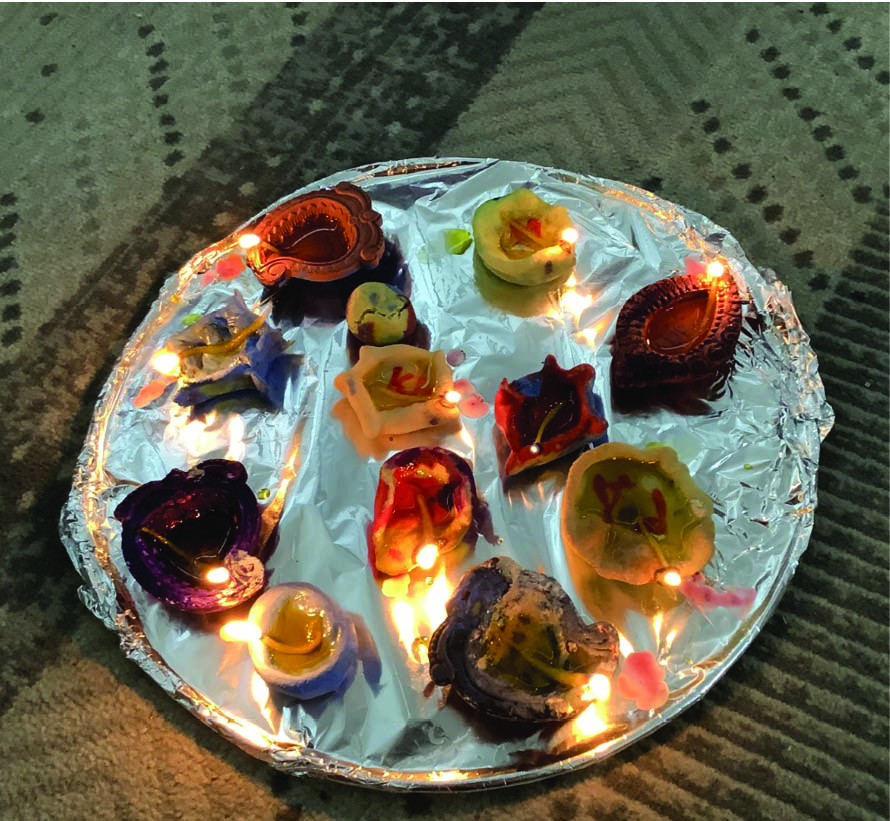 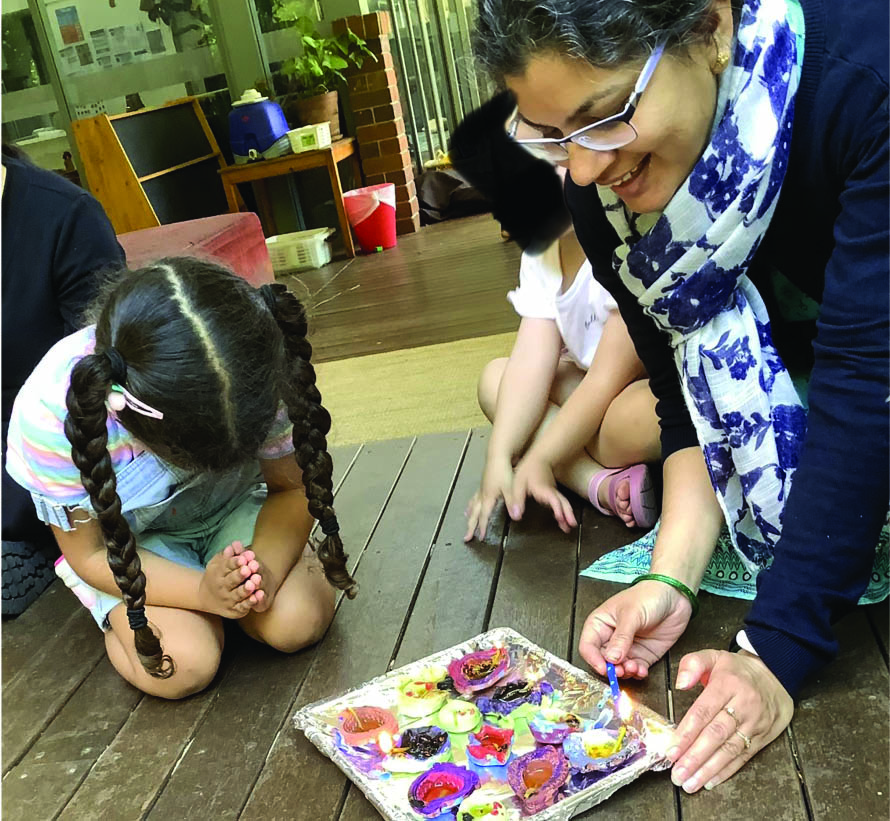 The children here at Johnson House preschool have commenced their school visits and orientations. They have been very enthusiastic about sharing their own experiences with other peers and educators. This prompted educators to set-up a ‘school area’ learning space on the verandah to explore what it is like to be in big school. Provisions such as school and sport uniforms, school bags, lunch boxes, pencil cases, and exercise books were made available to children in the area. They tried on some of the school uniforms, which gave them ideas about different uniforms for summer, winter and sport. They packed their bags with small books and exercise books and placed some textas and pencils in the pencil cases. They practised opening and closing lunch box containers, then zipped and unzipped the lunch bags. Some pretend food was added in the area following suggestions by the children. This helped the children to be involved in making and packing some healthy lunches with fruits and sandwiches. A double-sided easel/chalkboard was provided for the children to explore how to write on these surfaces. This also enabled them to take on the roles of teachers as they wrote numbers and taught their students how to write and add numbers.

A variety of books about a typical day in school were also added into the area and reading these books has also supported the children to share their feelings about transitioning to big school. We read the picture book ‘Starting School’ by Jane Goodwin, which helped familiarise the children with what to expect on the first day of school. This also supported children who may be feeling anxious about going to an unfamiliar place for the first time or about making new friends. The children mentioned that they will have ‘buddies’, who are older primary school children, who will guide them in their new school. They were curious and asked where the bathroom will be, where they will have their lunch and when they can play in the big playground. We also read about some classroom rules and the children were keen to create their own rules to display in the school play area. The children based their rules on the rules they learnt from the story and from their school visits.

Starting school is a major milestone for children and their families, and it is important that the children can play an active role in preparing for the transition. While transitions from early childhood settings to school can offer challenges, these also provide opportunities for growth. We aim to help make these transitions as smooth and positive as possible for all children.

Through this experience, the children learned that places such as schools and classrooms have their own purposes, routines, expectations and practices. The children build on their prior and current experiences, familiarising themselves with school routine such as preparing their school bags, packing lunch boxes, and practicing self-help skills such as dressing and undressing in uniforms and putting shoes on. The children also openly explored their feelings about meeting new friends and teachers and navigating the routine and the physical and social environments of their schools. These experiences support children to feel secure, confident and comfortable with the process of change. 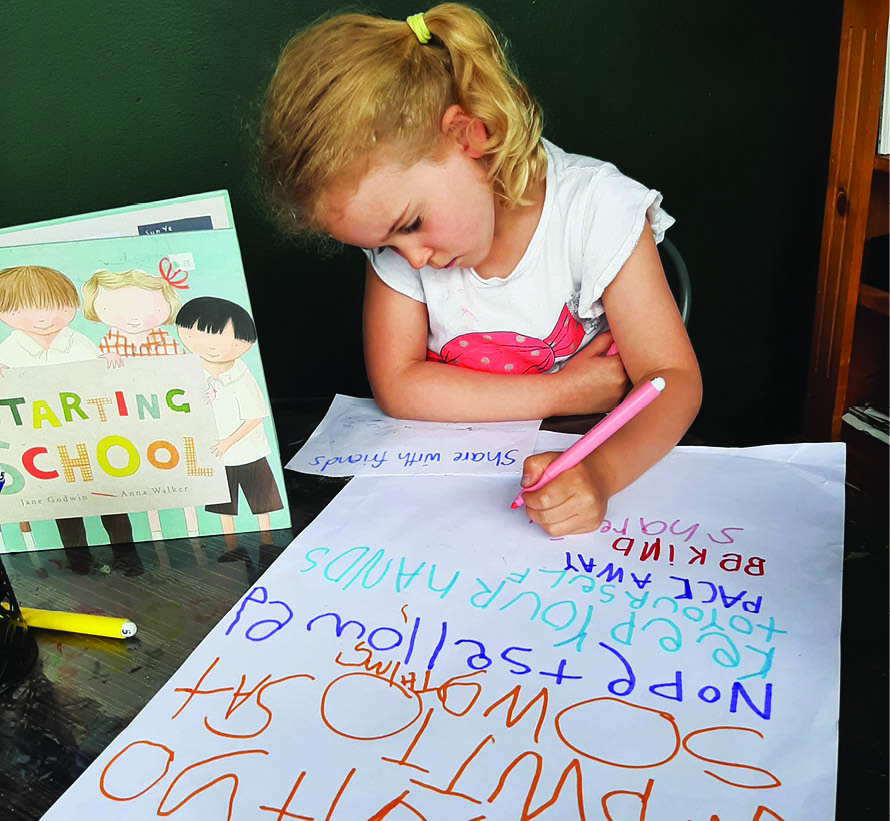 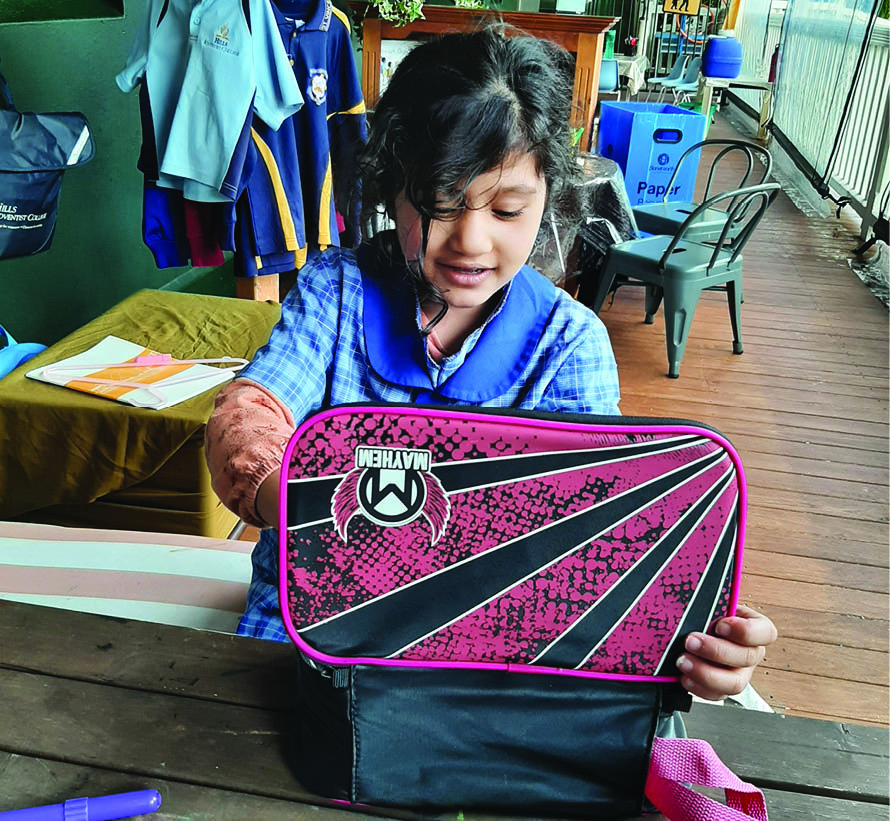 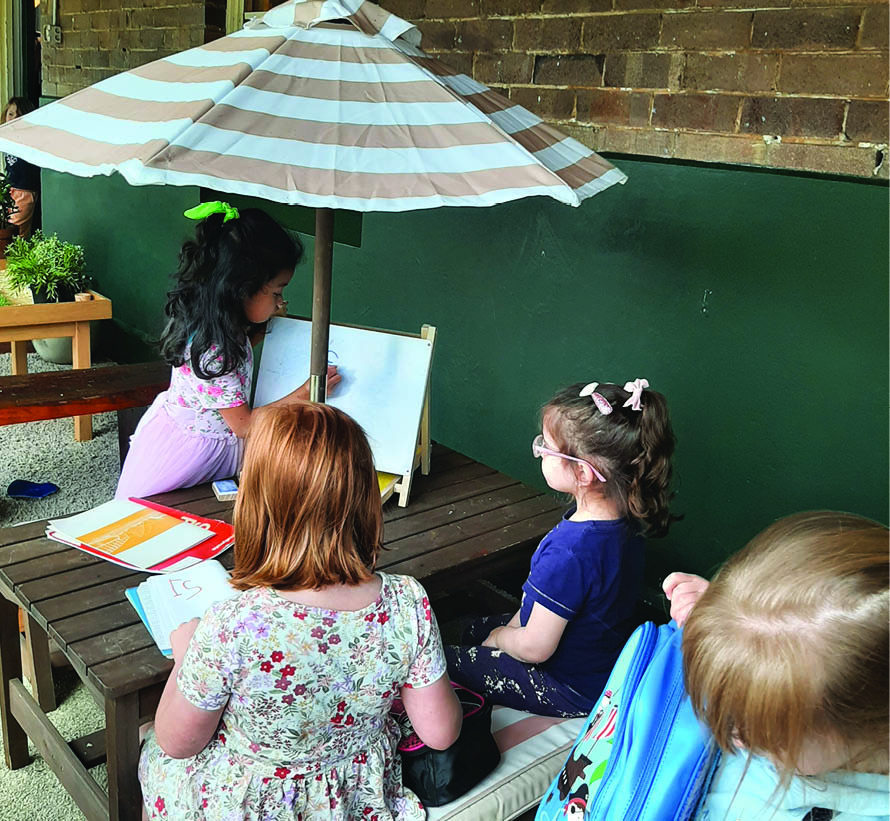 This week our playgroups have participated in the Aussie Bird Count. This is an annual event which can help to engage children in connecting with the natural world while getting to know the birds in their local environment. This is a simple and fun activity that all ages can take part in, and it can be done anywhere.

We placed pictures of birds around our playgroup environment and a poster of the birds the children might find. The children also had binoculars to search for the birds. After finding a bird, we took the picture back to our poster to see if we could match the bird to the poster, then we talked about the colours of the birds’ feathers and sounds the birds made.

By doing this the children became ‘scientists’—they learnt about the natural world and gained scientific skills such as colour recognition and identifying likenesses and differences between birds.

This type of activity can be a gateway to your child making many exciting discoveries, and we hope to help you and your child continue to make many more discoveries at playgroup! 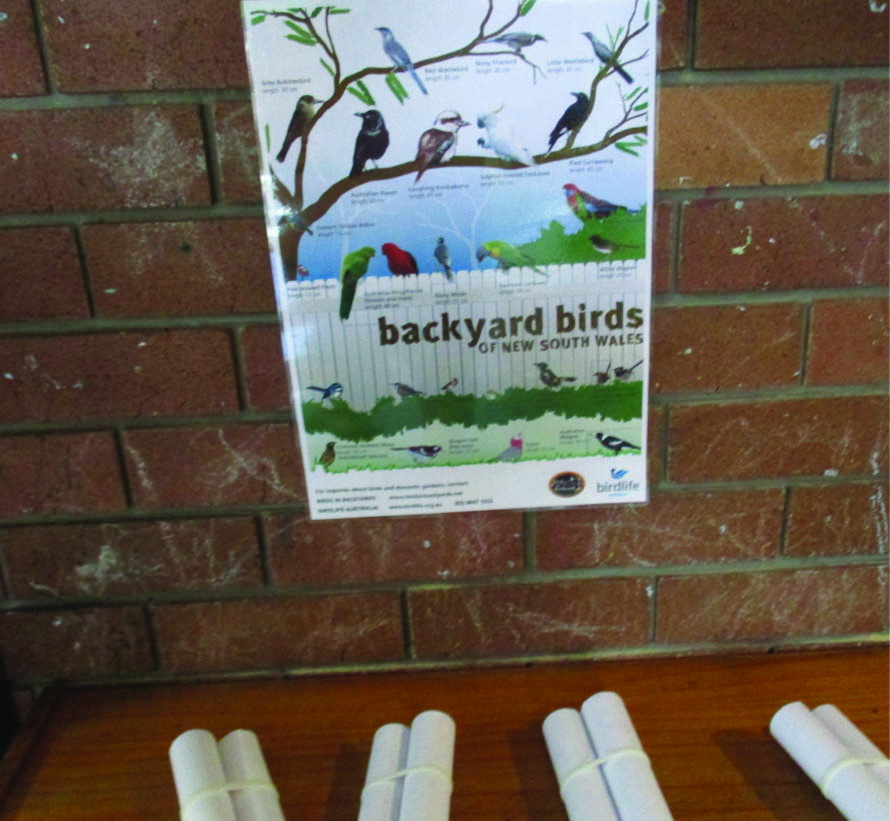 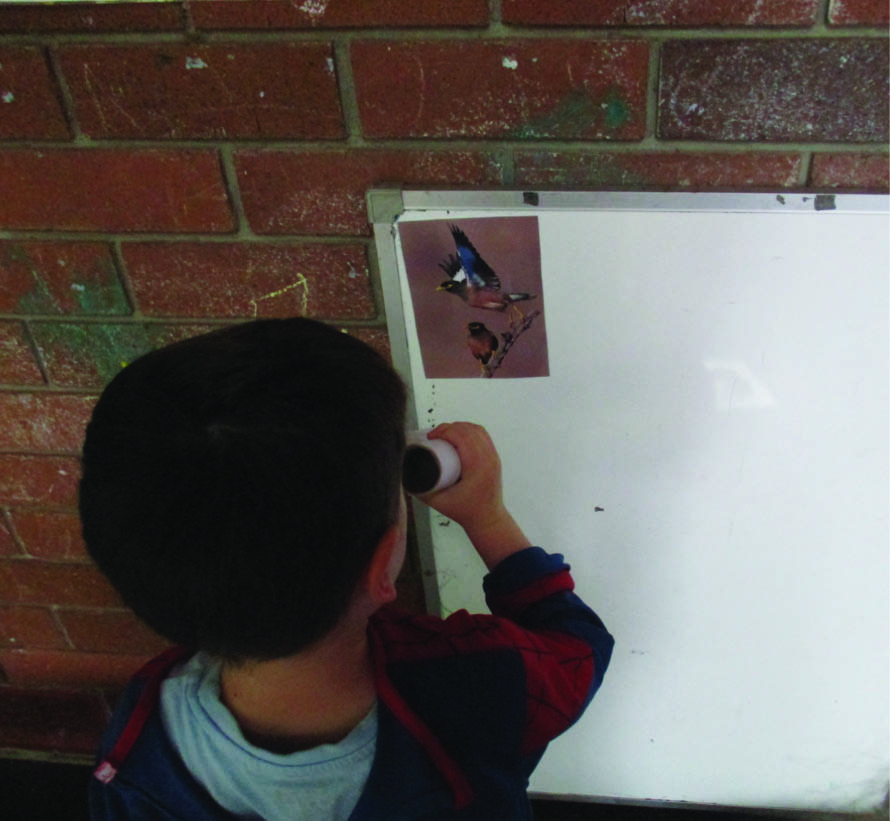 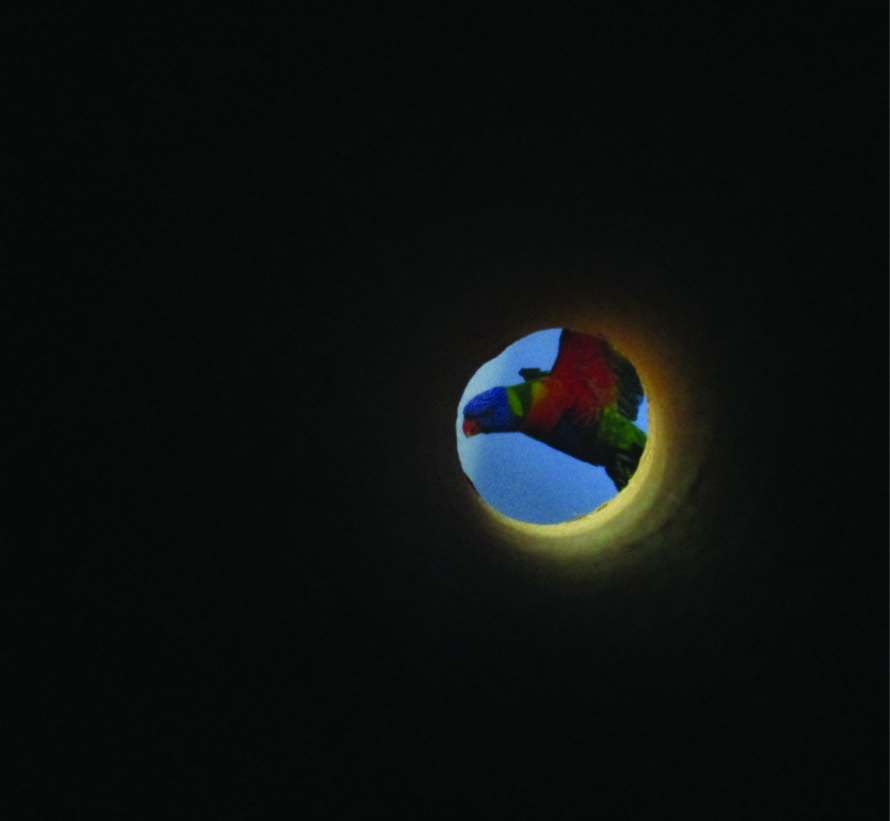