Several of the children in Gorton House preschool have always been drawn to all things spooky. We have seen these children engaged in ‘ghost games’, representing witches and ghosts in their artwork, writing and illustrating their own ghost stories, and having witches, potions and skeletons featuring heavily in their imaginary play. For these reasons, we were expecting that the approach of Halloween would certainly further influence their play, and we were not disappointed!

As Halloween approached, many of the children talked about “trick or treating,” pumpkins, and witches. They discussed what they knew about Halloween, what they planned to do for Halloween with their families and what they hoped we might do in the preschool room.

We saw children arriving at preschool in costumes, with many talking eagerly of the pumpkins they had been noticing in the supermarkets and discussing the spooky decorations they were noticing on many houses around their neighbourhoods. This generated a lot of conversations and prompted the educators and children to make some plans together based on what most interested the children. It intrigued many of the children to hear that it was the very pumpkins that they were seeing in the shops that could be carved into Jack-o-lanterns. It seemed that while most of the children recognised the association between Halloween and these pumpkins, they couldn’t fathom the idea that Jack-o-lanterns are not all plastic, and that real pumpkins can be carved to become Jack-o-lanterns. They had so many questions about the carving process and how the pumpkins are then lit up.

What an exciting process we got to be part of as Mariam, our Children’s Services Manager, who had heard about this fascination and gifted us with two pumpkins! Our very grateful children kindly sat together to write and draw her some letters of thanks (it warmed Mariam’s heart when she found these lovingly posted on her office door later that day).

After studying images to broaden our understanding of the many possible ways you may design a Jack-o-lantern, we carved the pumpkins, and the children had complete control over the design process. They took turns drawing the initial face designs on the pumpkins and then, alongside an educator, worked the blade of a knife into the pumpkins to etch out their designs. The joy as we then lit the candles which we placed inside the Jack-o-lantern was priceless.

There were a range of other Halloween experiences, with the children gathering to make “spooky biscuits” of their own design and others making masks to wear in preschool, using open-ended materials and their own creativity. These child-led, play-based experiences fostered many of the skills that we know are important throughout life—planning and collaboration, working as a team on small group led projects, negotiating, compromising, turn-taking and valuing the many ideas and perspectives shared within a group.

We built awareness of the potential risks of the Jack-o-lantern experience (the use of the knife and the presence of lit candles) and broadened the children’s knowledge of why these could be dangerous and how they should be used safely. We discussed how risks could be minimised or inadvertently increased if these items were used unsafely. We wanted to raise the children’s confidence and competence, as well as their awareness of risk, using this meaningful opportunity.

We created a space for some of the children’s other spooky ideas to be explored and evolved, and some of the children worked together to make a witch’s castle using a box, later adding witches made from paper and cardboard cylinders. Over the course of the week, more items were added to this, including orange playdough, and some little plastic skeletons that inspired some of the children’s play. We deliberately avoided using unnecessary amounts of disposable plastic or decorations and we bought only a small amount of more durable skeletons that we hope will last and inform children’s play well beyond Halloween. In fact, we bought very little. And we have used all parts of the pumpkins—we roasted and tasted the seeds and we’re saving the stringy pumpkin flesh to make either a soup, or maybe some pumpkin scones…. We plan to experiment with some of these ideas next week. 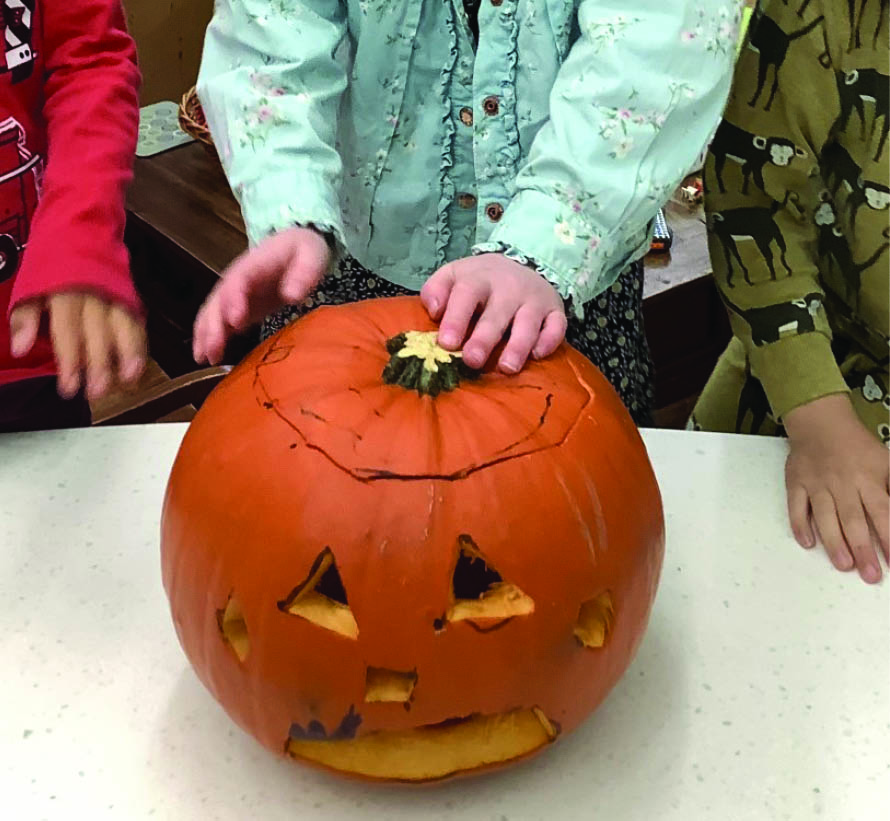 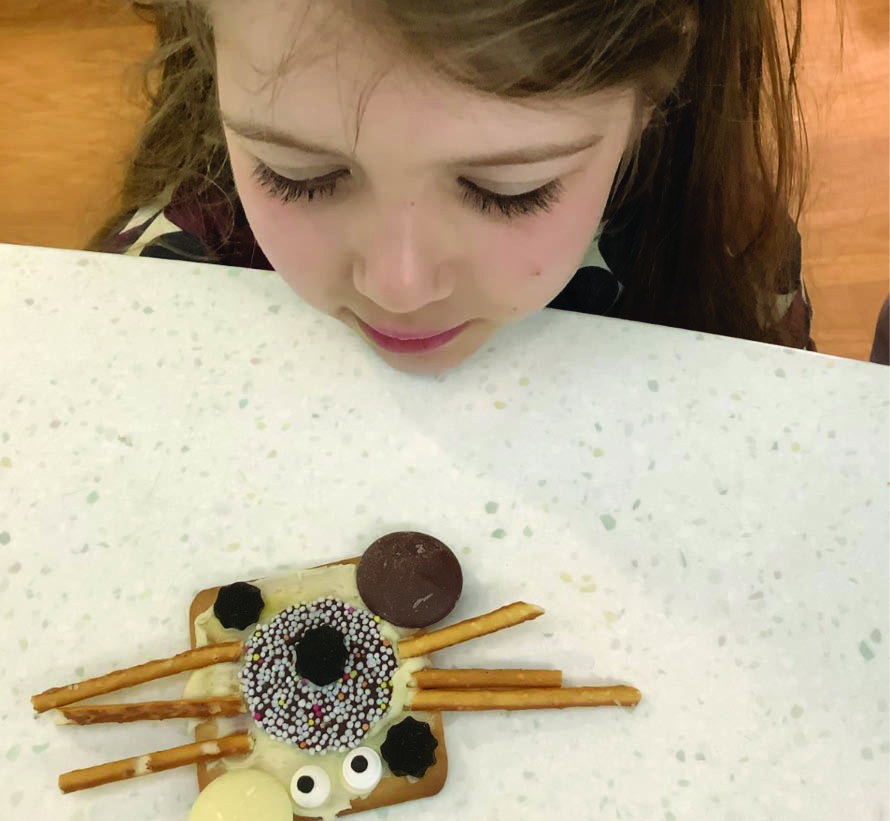 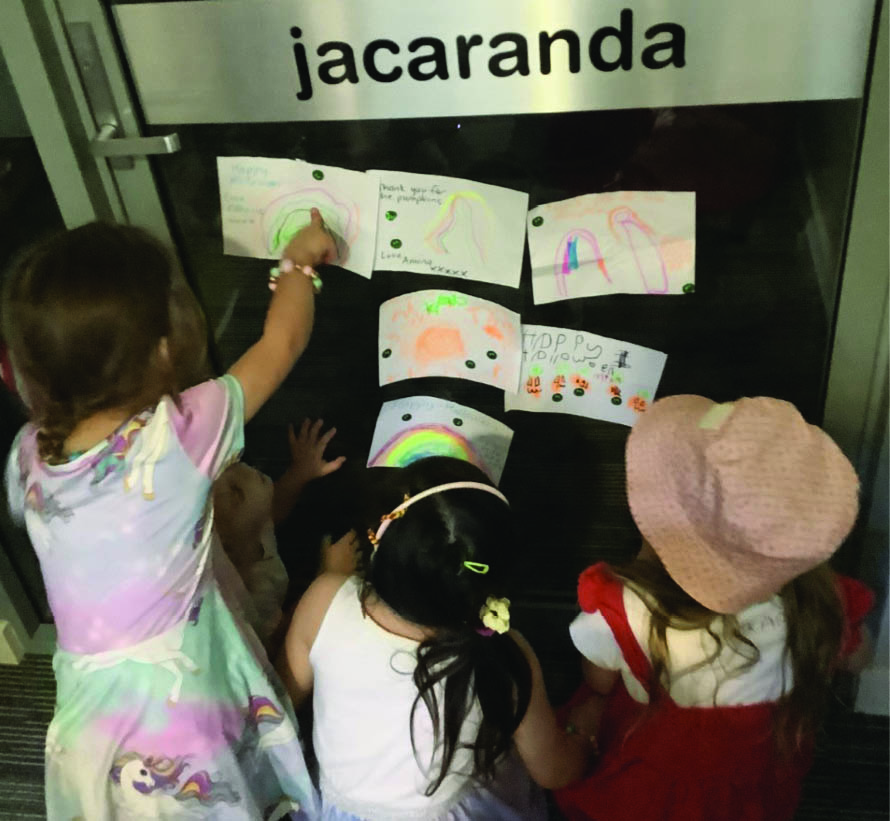 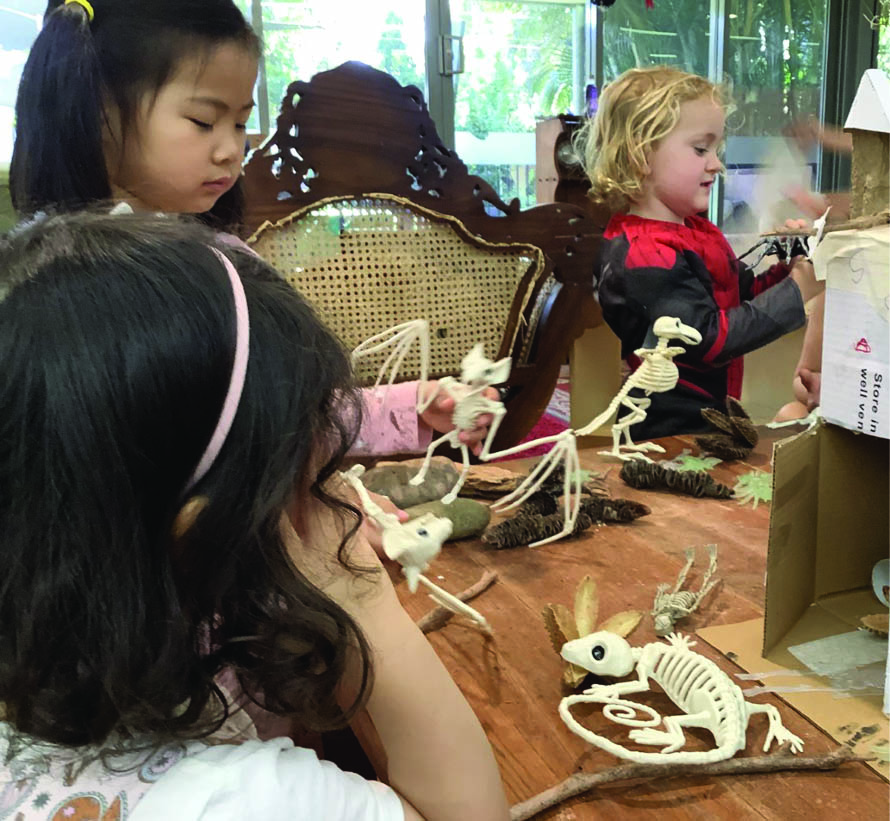 The children at Johnson House toddlers use clay to express what’s important them. While manipulating the clay by squeezing, pressing, pinching, pulling, rolling and breaking it with their hands and fingers, the children create three dimensional moulds to communicate their thoughts and ideas. “Look I’m making a skeleton”, said one child, “Mine is a cackling witch, hehe”, said another and “I’m making a snail”, said one more.

Through the medium of clay, the children’s creations allow them to share and gain knowledge about an array of interests. One child focused on the subject of snails by telling us where they live and what they eat. Another child made a collection of small balls that she diligently rolled, and she demonstrated her developing mathematical understanding by counting to 17. Other children shared in this endeavour by also counting the little rolled out balls which were lined up for counting.

While manipulating the clay the children were strengthening their hand-eye co-ordination and building their dexterity and their ability to focus/concentrate. Educators enjoy using clay as an open-ended resource where the possibilities for what the children can come up with and create are limitless. 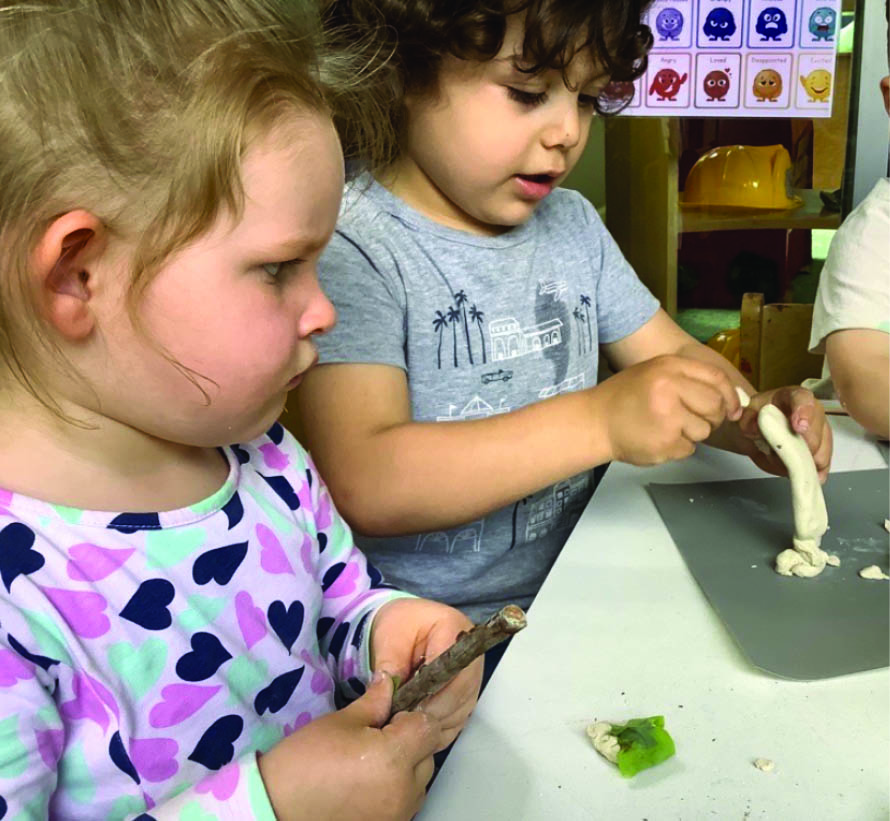 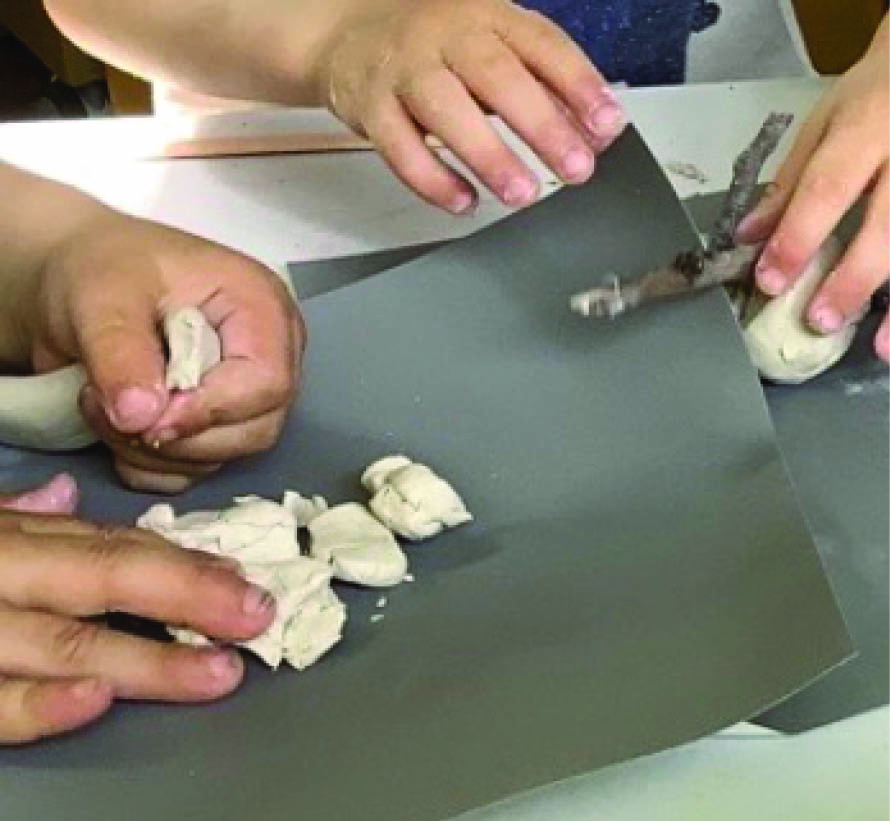 In Murray House infants the children and educators have been celebrating Diwali in many ways, for example, by making diya (small decorative lamps) from different materials, creating rangoli patterns and making Laddu (a type of Indian sweet) and many other activities.

In Murray House infants’ the children are learning about and developing their understanding of diversity. They used clay to make diya for Diwali. Clay is a nice sensory experience for children, and while making the diya they were developing their hand-eye coordination, using their finger and hand muscles and practicing and developing their social, emotional and language skills as they interacted with others.

The children are also developing new tastes. While making the laddu, they touched the desiccated coconut, and some also tasted it. I asked the children if they could smell the scent of the coconut, and some said yes while others said no. I also showed them sweetened condensed milk, which is an ingredient of the laddu, and some tasted it and said it was yummy! This experience gave children opportunities to use and develop their five senses of smell, sight, touch, taste and hearing. During this experience the educators were talking with the children and explaining the process, so the children were also developing their language and listening skills.

Our integrated team of Educators and Allied Health staff also celebrate Diwali by dressing up in traditional Indian clothing and sharing Indian dishes. 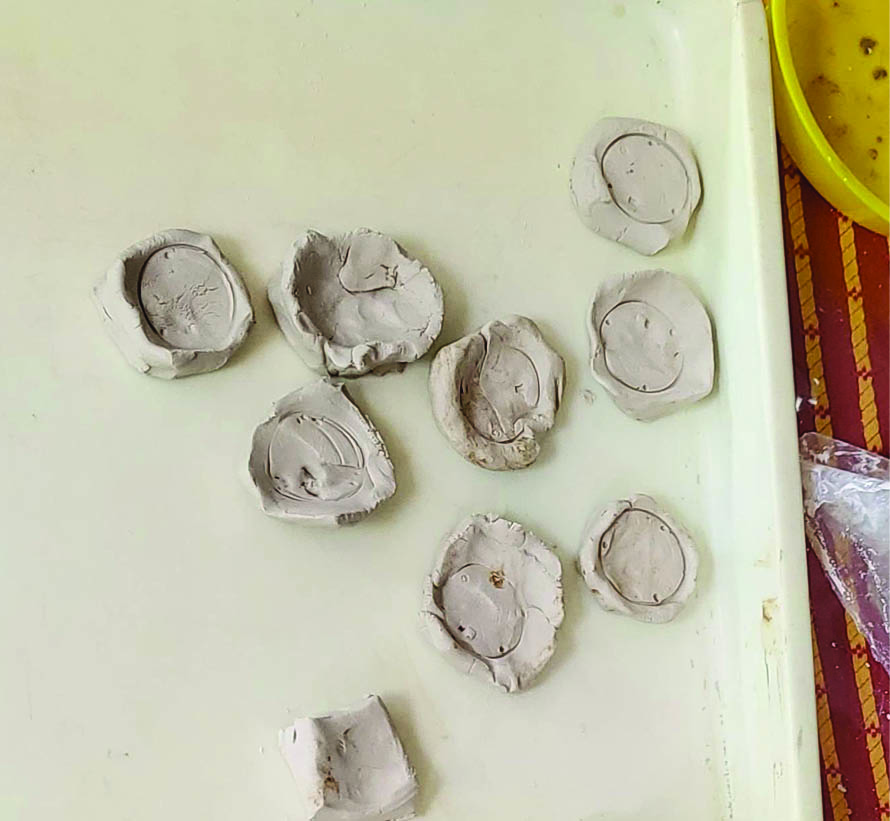 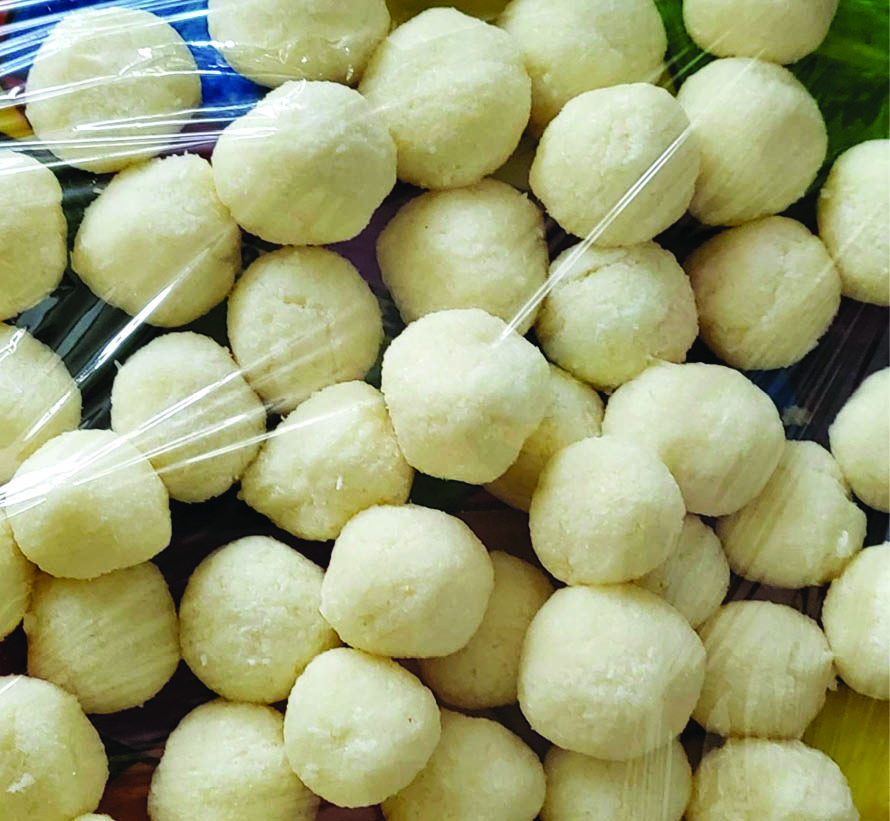 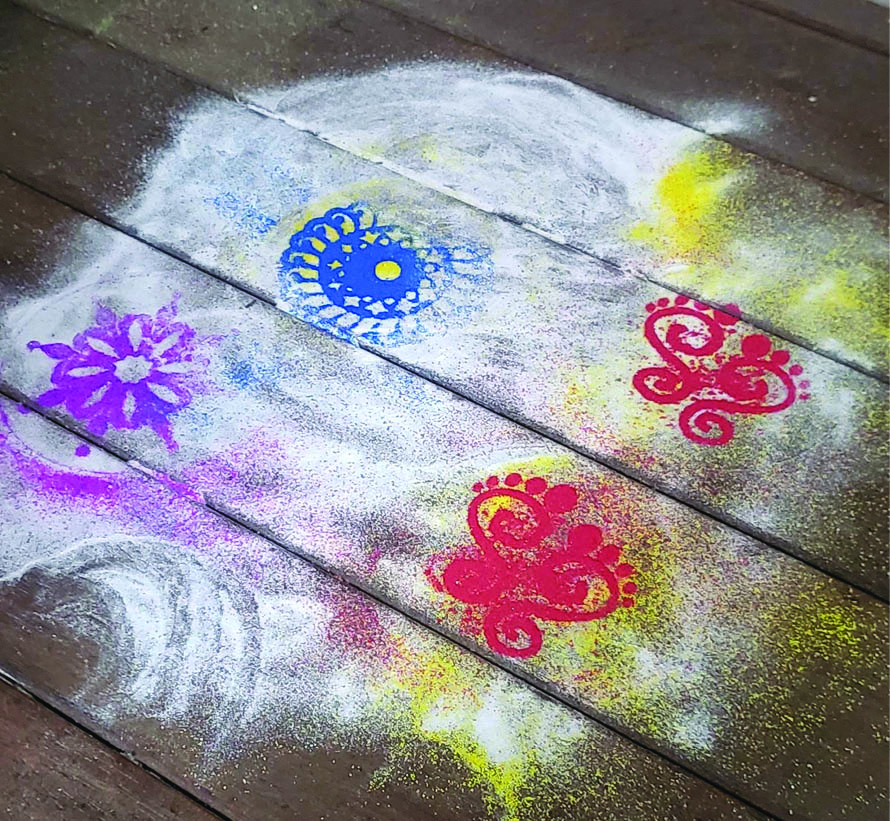 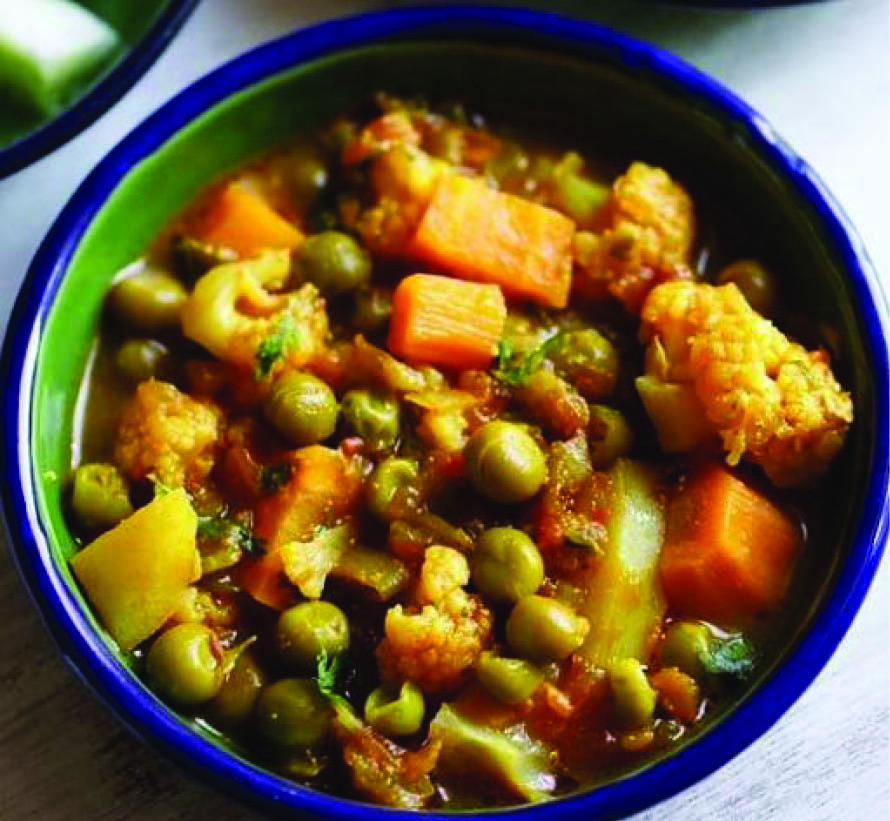