Along with the learning around Australia’s Aboriginal heritage that we strive to always embed within our program, this week we acknowledged NAIDOC Week, as a week to celebrate the many things we have learnt from Australia’s first people. As we looked together at a NAIDOC Week poster we examined the words and theme for this year—VOICE, TREATY, TRUTH—and considered what these words might mean. We discussed that until now, we don’t often have voices of Australia’s First people in our government—when the government makes rules for Australia, it is important to have Aboriginal and Torres Strait Islander people in government, to be part of making decisions for this country.

Over the past few weeks, children have also been exploring the term ‘Terra Nullius’. Many of our children have learnt that Terra Nullius means “land that is not occupied” and that in our constitution, this is how Australia is still described prior to colonisation. Our children can tell you that Australia was not ‘Terra Nullius’, and that Aboriginal and Torres Strait Islander people occupied this land for thousands of years, and it was their home, thus explaining the need for treaty (a word and concept we are still trying to understand).

We also considered ‘Truth’ and the need for everyone to understand and acknowledge the truth about Aboriginal people’s experiences and loss of land and how this has affected Australia’s first people. Our children participated in sharing some NAIDOC Week posters with various sections of The Infants’ Home, taking copies of posters to be displayed in reception and our business services unit where they were gratefully received by staff Sonia, Georgia, Belinda, Clare and Sarah. We went to Rigby, Robinson and Johnson Houses where educators and children also happily received the posters and had some discussions about what NAIDOC Week might mean. It is a learning curve for all of us.

Amongst various experiences, our rainbow Serpent Goorialla came out to visit led us through the preschool and toddlers playgrounds, clapping sticks and dancing along to Yothu Yindi’s ‘Treaty’. We visited the tree, as we often do, and the children devised games around the humpy/gunya, gathering bush tucker, lighting campfires, hunting for goannas and singing ‘Innanay Gapoo-ana’, whoch is a much loved song in Yorta Yorta language about goannas sleeping in the hot sun. 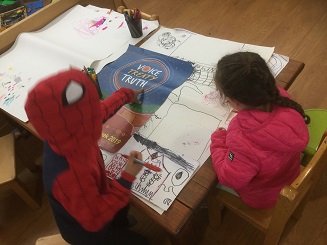 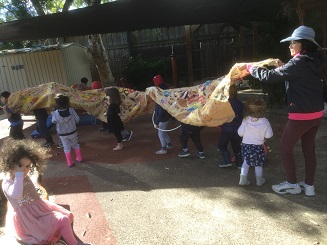 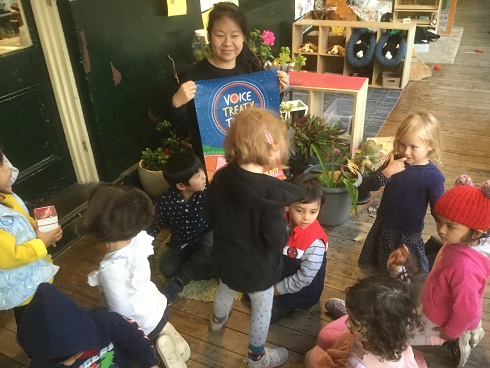 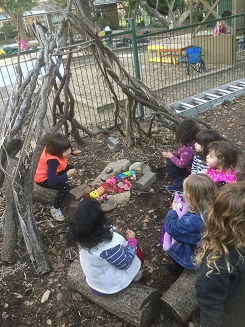 Some of the children in Johnson House toddlers brought some Dreamtime stories and animal counting books to share with peers and to help us celebrate NAIDOC Week. The children were very enthusiastic about sharing the stories together and then looking at the animals on the table. The children could link the learning from the stories to what they were playing with.

The children in Johnson House preschool have been exploring Aboriginal art and have been using this as inspiration for creating their own artworks. Aboriginal symbols have been explored, as well as unique artworks created by dots. This has been a great opportunity for the children to explore diversity through art and to recognise the many different ways in which artworks can be created. The experience was revisited regularly throughout the week, and the children began to recall the symbols and their meanings and to show increasing confidence in replicating these within in their own artworks. 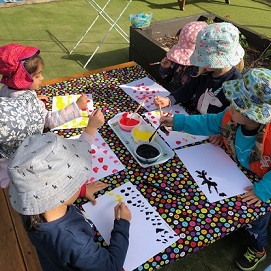 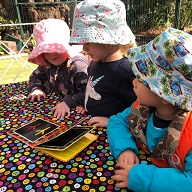 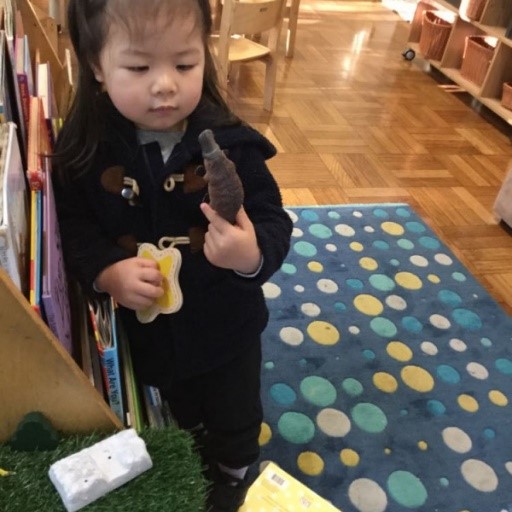 Celebrating NAIDOC Week, the children in Murray House babies were invited to sing ‘Inanay‘, and Indigenous Australian nursery rhyme, and ‘Wangal Land‘, a song created by educator Nicky in Gorton House to acknowledge and respect the Wangal people and land on which we play and learn. The children love singing in groups, and have been enjoying clapping sticks along with the music and raising their hands to yell “choo!!”

In Murray House toddlers we have been trying to respectfully embed Aboriginal perspectives into our program and learning environment. In acknowledging NAIDOC Week, the children engaged in a range of experiences, such as painting Aboriginal symbols with sticks on small wooden stumps, reading picture books, and creating a map of Australia using paper bark. Educator Karen invited the children to fill an outlined map of Australia with paper bark, and had meaningful discussions with them about what they would like to see on the map of Australia. The children shared they wanted to see “Mummy and Daddy”, “its people”, “tree and the leaf”, “beach” and “ocean and the fishes”. The children related to the map of Australia as ‘their Wangal land’, where we are at in Murray House. They also painted around the outside in blue to represent the ocean.

We placed our map of Australia in the middle of our yarning circle. A group of children gathered around it, and we passed around a string of wool. With each and every one of us holding on to a part of the string, it represents the relationships that bind us together as a family. We’ve also been learning a new song, which was launched on ABC Play School on Monday. This song is a way to acknowledge the country, and pay respect to the land. We will continue to embed Aboriginal perspectives in our experiences and learning environment. 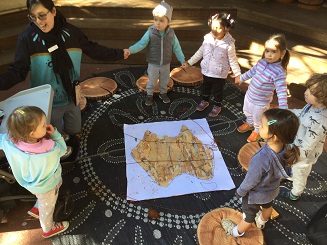 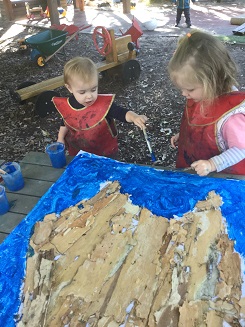 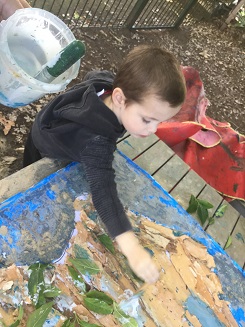 To celebrate NAIDOC Week in Rigby House we have been engaging our children in various experiences which support awareness and education of Indigenous Australian culture. Our young children have been participating in art and music experiences and listening to Dream Time stories.

The educators invited the children to paint using the colours of the Aboriginal flag and were surprised by a beautiful, spontaneous response from the children. The children each chose a paint colour, and as they brushed their paint on the paper, they explained the meaning of the colour they were using. “Black is people”, “Yellow is the sun”, “Red is the land”. It was so lovely to hear our young toddlers explain the meaning of the Aboriginal Flag colours so eloquently.

Every day when the children gather together to share songs or stories, they start by acknowledging the Traditional owners of our land. We do this by singing a lovely song, and the children enjoy using tapping sticks as they sing. During this week the children have been decorating new tapping sticks, using the colours of the flag, and brown and white. The children used paint brushes and sticks to paint the colours and patterns, and they all enjoyed the challenge of painting on this cylindrical shape. 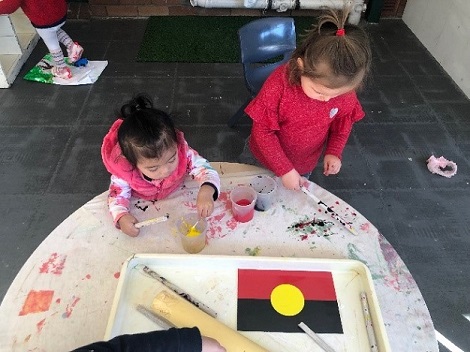 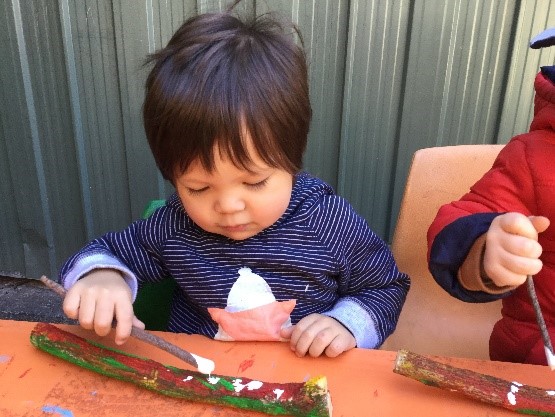 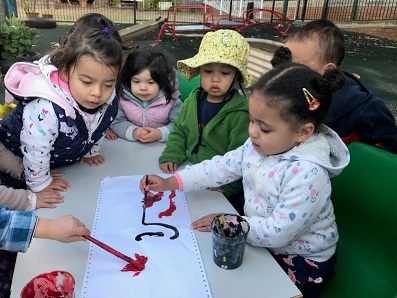 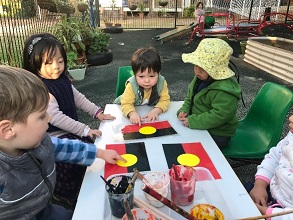 This week educators in our Family Day Care Sydney Wide Inner West Hub have been celebrating NAIDOC week with children and families. The educators have embraced the chance to undertake different activities with the children, which have ranged from going on excursions to see community celebrations of NAIDOC Week, to cooking unusual foods with the children in the educators’ services—think kangaroo!

These types of inclusive activities are embedded into children’s throughout the year so that the children can form and then build upon an understanding of the rich cultural history of the Indigenous peoples of Australia. 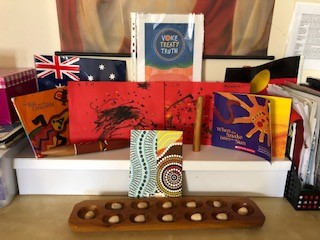 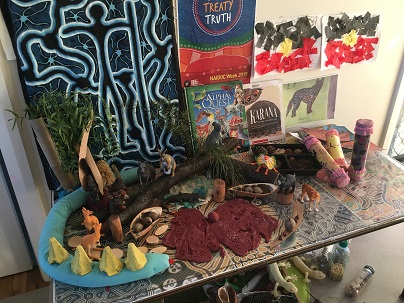 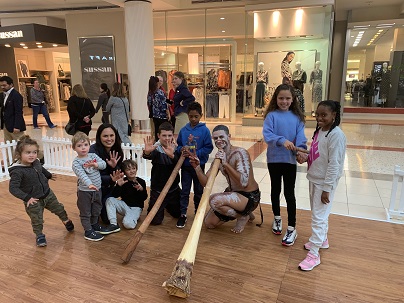 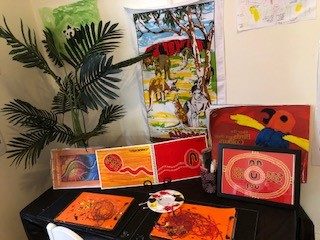