The children in Gorton House preschool have continued to explore and show an interest in bones. This weeks a new human skeleton poster became a catalyst for further discussion about bones and, in particular, what they feel like, and what they might be made of. We were able to respond to the children’s curiosity and questions immediately by providing some actual bones for them to explore. One family who have recently bought a farm discovered several animal bones on their property and they generously brought them to the service for children to examine. “They feel hard” and “they feel heavy” were the most common observations shared. Children shared theories as to what creatures the bones might belong to, with the suggestion of dinosaurs being one possibility, although the child who had brought in the bones explained to the other children there was a cow’s jaw (with teeth still intact), a cow’s femur, a kangaroo’s vertebrae and a sheep’s skull. Throughout the days we saw children sit in front of a recycled and no longer working computer to take on the role of ‘researchers’. They have observed that in the past we have researched answers to questions using the internet, and they placed the various bones in front of the screen, and pretended to type in questions such as “What type of bone is this?” and then ‘reading’ the pretend answers that came up on the screen. This led us to using the iPad to actually ask the real questions children had as they wanted to affirm what had been told to them about the types of bones in our collection. The children demonstrated an understanding of how technology can be used to research, explore and build on their understanding of topics of interest. 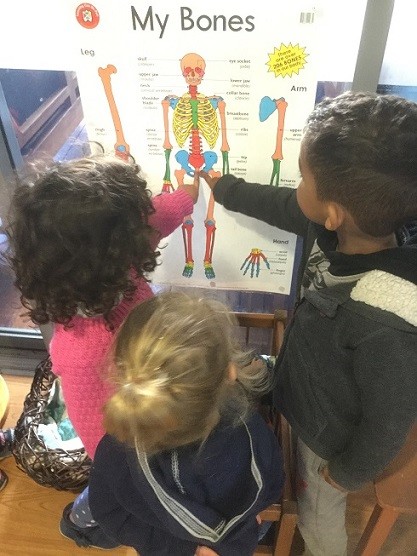 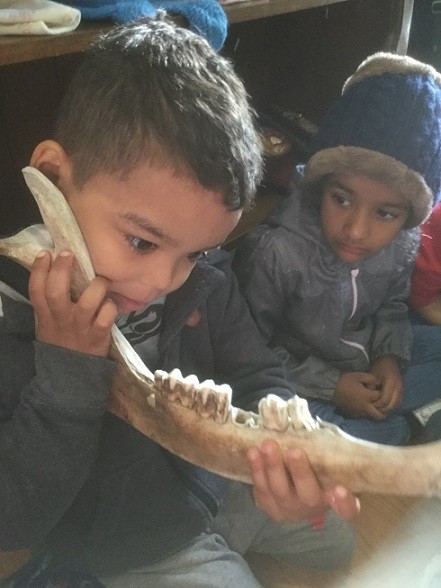 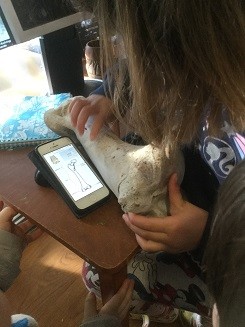 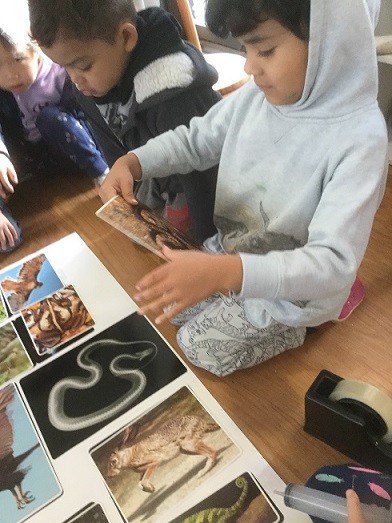 The children on Johnson House toddlers continue to be enthusiastic in joining their peers in dancing and movement experiences. The children were excited to dance with the scarves and to move their bodies to ‘The Wiggles’ music. As they were moving to the music the children were twirling and at the same time whirling the scarves up high and very quickly. The children also enjoyed doing the actions to the song ‘The Wheels on the Bus’. Through these experiences the children are continuing to develop their gross motor skills and gain awareness of the way they can move their bodies. The children are also beginning to learn about musical concepts such as fast tempo, slow tempo, pitch, and loud and soft sounds as they listen to the music. As the children were dancing they were expressing themselves creatively and choosing the way they wanted to move.

Recently Johnson House preschool children’s attention has been drawn to play involving magnets. Initially starting with magnet blocks, the children began to make a range of three dimensional constructions, which then promoted further curiosity about other items that may be magnetic. Questions were asked and ideas and thoughts were exchanged amongst the children. This led to experiments being created, and the children were observed to be hypothesising and problem solving, all of which helps to create a rich inquiry-based learning environment. 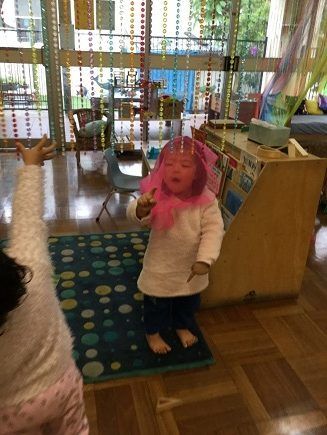 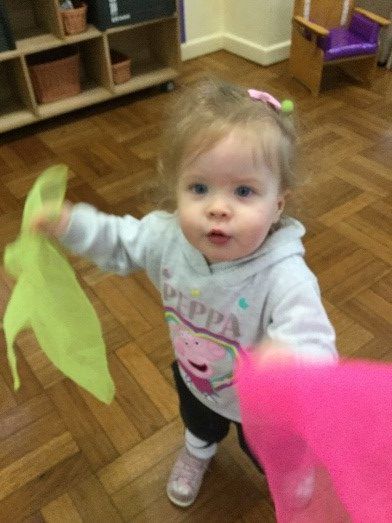 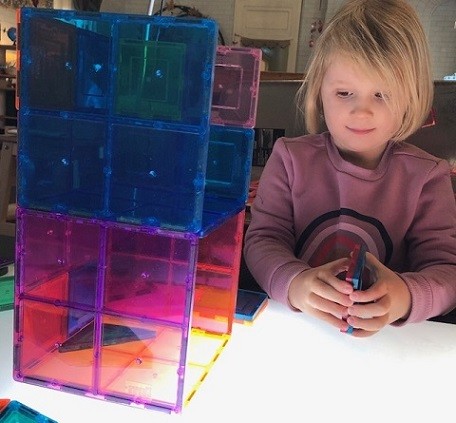 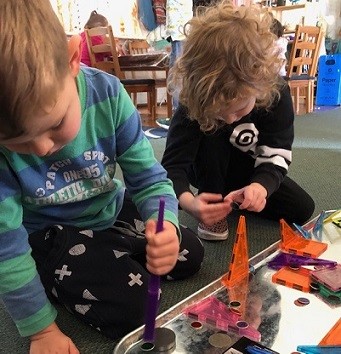 As part of our sustainability project in Murray House, the children have been learning about recycling through picture books, on topics such as how to use the different bins for recycling and looking after our worms and feeding them with leftover fruits and vegetables.

This week educator Deepa started a project with the children on how to repurpose our old shoes and boots into plant pots. Deepa explained that if these shoes no longer fit us, instead of throwing them away, they can be used to make plant pots. This got the children thinking, How? One of the children suggested, “We can put some dirt in the shoes?” and their friend responded “No we can’t!” It seemed that this experience challenged the children’s way of looking at their old shoes, and was an opportunity to encourage them to think about how they could be reused. Deepa demonstrated how they could turn the old shoes into plant pots by adding dirt. The children chose a pair of shoes from the basket, filled each shoe with some dirt and placed a plant in each.

This experience helped develop their awareness of sustainability and their sense of responsibility towards the environment, and to think about ways to reuse old and unwanted items. The children were very proud of their contributions to our garden as they displayed their new plant pots on the rack. We will be continuing this project by expanding our garden with recycled materials. 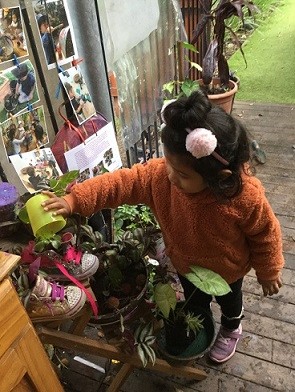 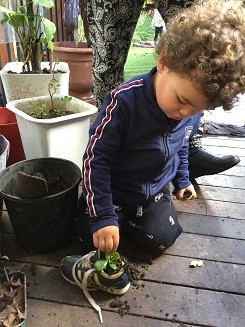 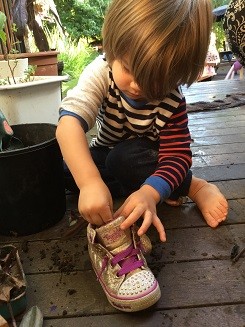 Randwick South Sydney Family Day Care Sydney Wide celebrated International Mud Day (which is on 29 June) with a mud table where the children were able to touch, mix and transfer ‘mud’ using a variety of household tools and containers. One Educator, Ilana, was so inspired that she has now created her own mud play space at her service. The mud theme was extended into creating a ‘construction site’ in the sandpit with trucks, timber planks, bamboo poles, buckets, spades, hard hats, clip boards and rulers. The children freely explored the construction site and rearranged things as they used their problem-solving skills. One child made a platform to cross the site by carefully positioning the timber planks. The construction site also gave children the opportunity to develop concentration and perseverance, develop spatial awareness and experience the satisfaction of achievement. Everyone had so much fun playing with the mud and sand that feel we could have International Mud Day every day! 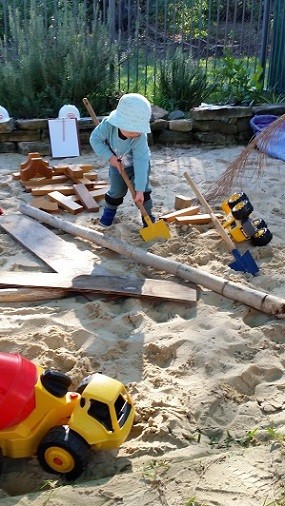 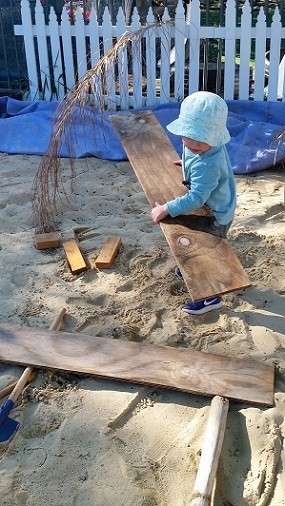 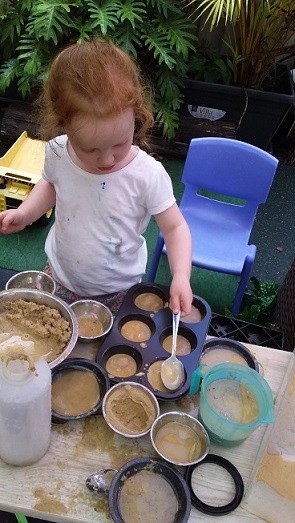 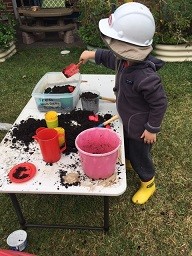 This week at playgroups we have been focusing on colours. There have been a variety of activities such as pom-pom sorting, coloured pasta threading, coloured bean bag throwing, and rainbow painting and craft. The variety of textures and tools used for these activities help strengthen children’s hands and fingers and their fine motor control. During group times we sang the ‘Rainbow Song’ and ‘What colour are you wearing today?’ We also made coloured cupcakes which were a great treat and enjoyed by all! 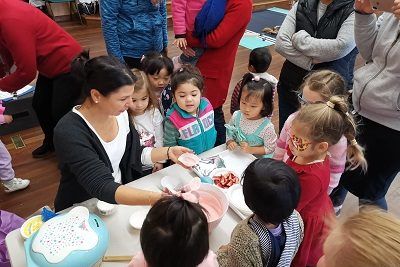 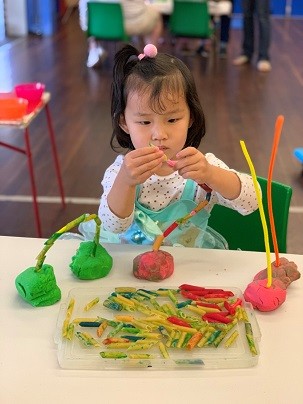 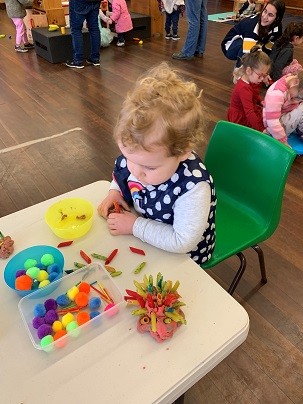 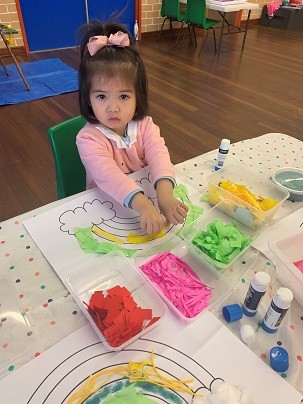