This week at The Infants’ Home: October 29 to November 2

The children’s interest in the creation of beyblades (a type of spinning top toy) has been going for over two months, and different kinds of resources such as mobilo, geared square and triangle connectors and some wooden blocks have been explored and used by the children to create their own beyblades. The design has been developed from the simple one (a round connector and one piece of Mobilo) to cross shapes and then to three dimensional beyblades. With the geared connectors the children have created pyramid shaped beyblades with square bases, as well as two-sided cones to spin on different platforms, either on the table or floor or the platforms they made themselves. The children happily spoke about their discoveries, eg “the square can also spin around”, and some even added Lego® inside to make musical beyblades. In these creations the children have shown very good cognitive and thinking skills, especially on geometric shapes and balance, and they have developed fantastic problem solving and creative skills. 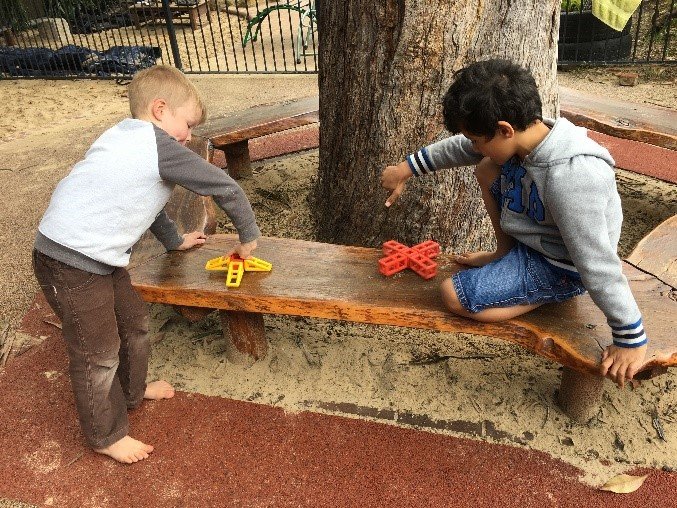 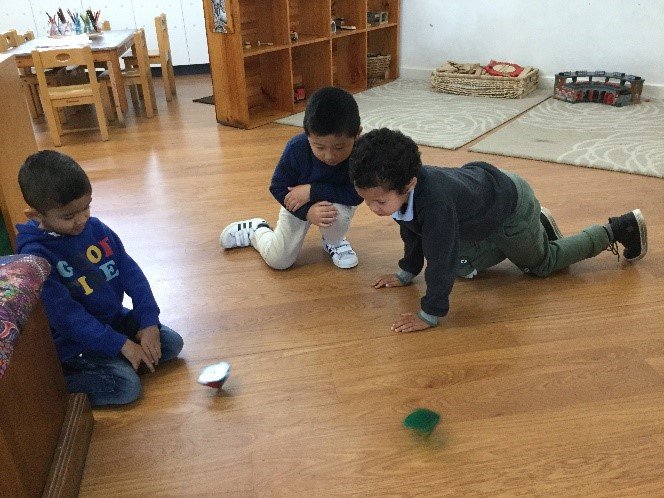 Drawing on inspiration from the recent Infants’ Home Arts Festival, the children in Johnson House Preschool have been enjoying creating and building with boxes. Towers, cubby houses, cars, robots and even a cardboard eating monster have been just some of the creations built during the week. There has been lots of collaboration and cooperation observed as ideas are developed and shared. The simplicity of a using a cardboard box demonstrates children’s ability to draw on imagination and creativity to help create endless possibilities. Through such play the children are also developing skills linked to problem solving, experimentation and persistence. 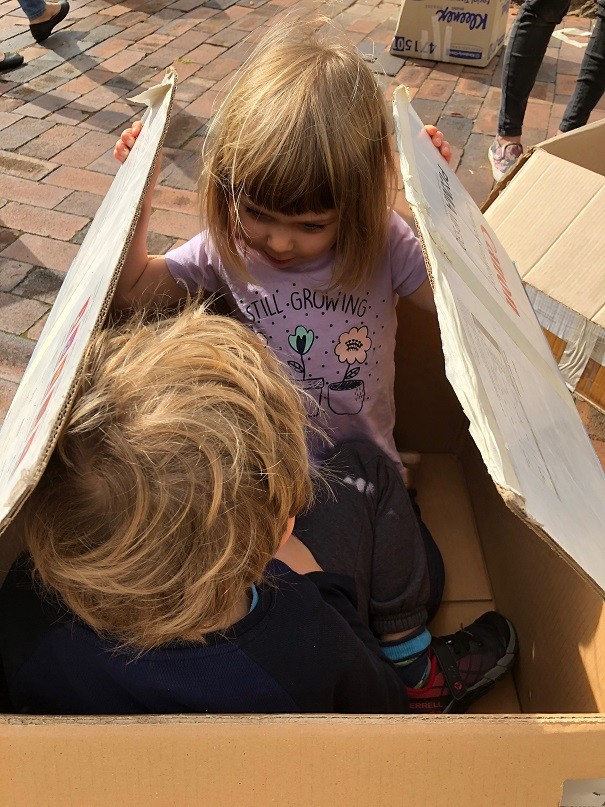 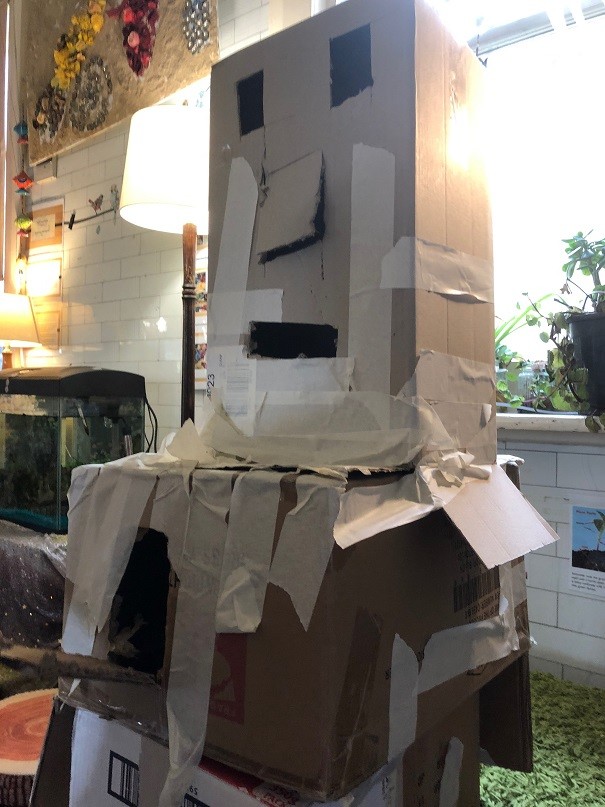 Following the Hungry Caterpillar project, educators in the infants’ room have created a habitat for a few silk worms for children to observe and explore. The children are involved in looking after the habitat, cleaning the waste product and laying fresh mulberry leaves for the silk worms to eat. The opportunities to observe silk worms have allowed the children to build on their language skills to convey thoughts and share their learnings verbally. Using their senses, the younger children have shown great interest in touching the creatures, describing them as “Wiggly worms” or “Wriggly caterpillars”. Some of the curious children have asked to touch the silk worms and help to put them back in their habitat after they have been taken while it’s being cleaned. When asked about the food they eat, the children excitedly answer “Green leaves”, and imitate a silk worm munching and crunching on the leaves!

The children in our toddlers’ room have been working on a new project–growing beans in small, transparent pots. The children were invited to read ‘Bean seeds to bean plant’ by Anita Ganeri, and they compared the pictures in the book with the little seed growing in their pot. “Wow! It’s growing up, that the root is coming out the seed” said a child as he used a magnifying glass to look closely. The children compared an older growing bean plant with the little seed, noticing the differences. The seed is growing its roots and leaves as it shoots up and grows taller. Next, they were invited to document their observations using drawing.

“Look at my bean seed, it’s very big, it’s got handle [root] this is egg.” The child thoughtfully scanned the bean seeds in the cups and then compared these to the pictures in the book. “It got this one like that” after a few minutes of sketching coordinated lines in the middle of her paper, she was happy to announce, “This is the beans, it looks like a seahorse”.

Another child looked closely at her friend’s drawing, then back to the bean seeds in her cup, “It got that [indicating the root], what’s that?” she questioned. The educator drew the child’s attention to the pictures in the book depicting the roots growing out of a seed and then to the child’s seed with a tiny root growing, saying “It’s like that one”, and pointing. “Yes your bean seed has a root growing, soon it will grow shoot or leaves” the educator continued to explain. “Yeah it growing leaves” replied the child. Soon she began to sketch what she was observing, and a few minutes later she announced of her illustration of dots, circles and lines “I just make all my beans”. 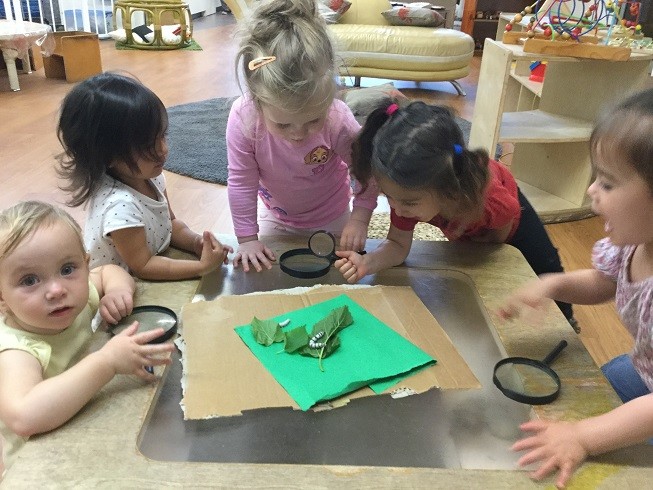 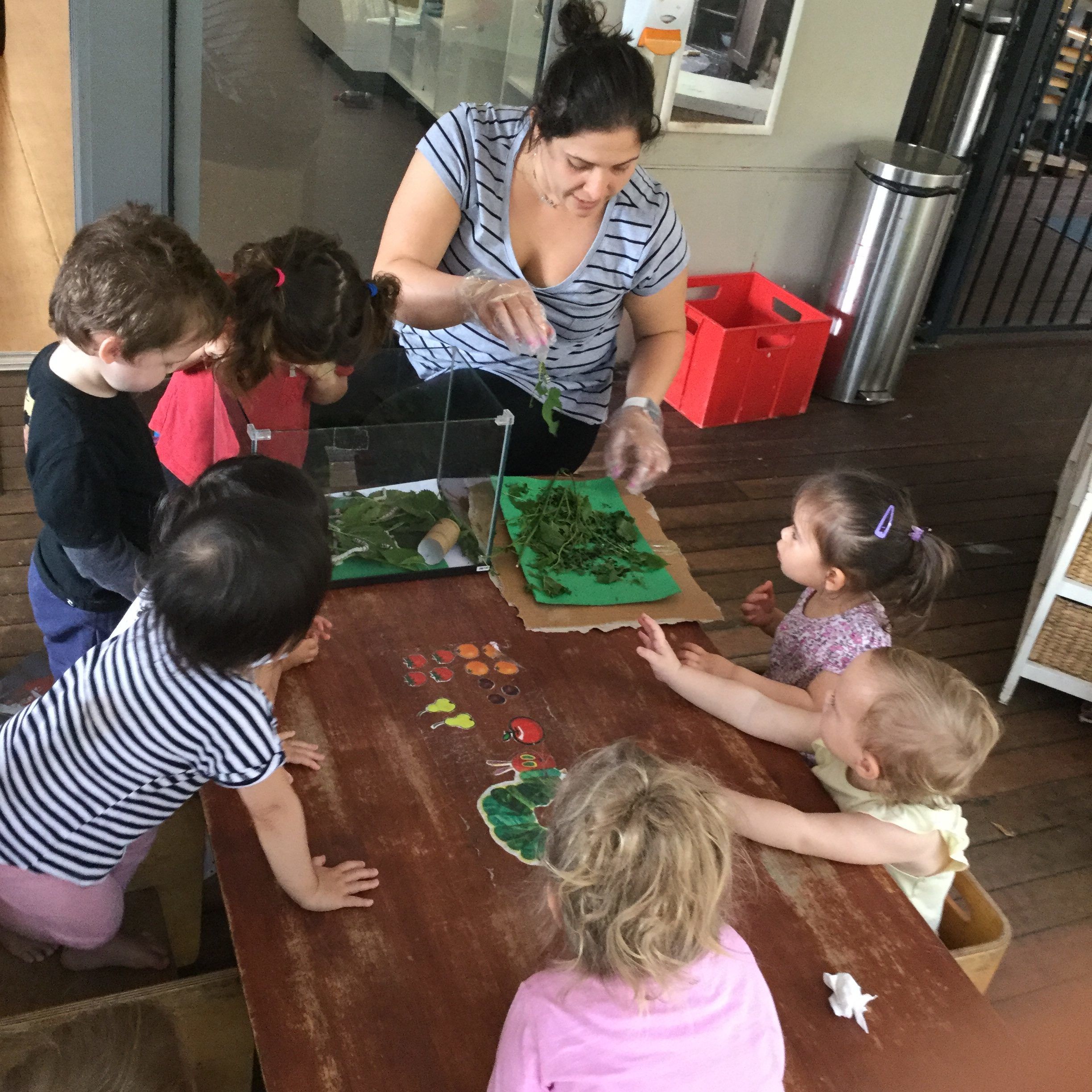 Gardening offers many learning opportunities for children across all developmental domains. One of the areas that children in Robinson House are developing an understanding of is that all creatures in the environment are interdependent and are part of the intricate ecosystem. With regular conversations and support from the educators, they are learning to take care of and respect all living things in the environment.

Apart from learning to respect all living things, gardening also assists children to develop self-control. For instance, when a snail is found in the garden bed, it can be very tempting for some children to want to hold it and own it. With guidance and support they are learning to control their urge hold it, instead we normally put it in a jar for a short periods of time for observational purposes then we release it back to its natural environment. 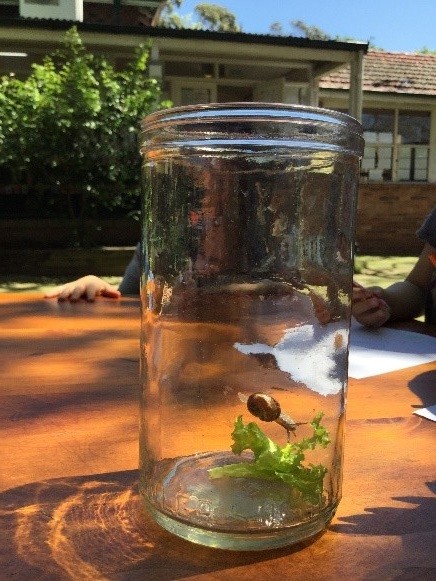 At the Randwick/South Sydney Family Day Care play session the children went on a special visit to Annabel House, which is a neighbouring aged care day centre for the elderly. The children picked the sweet pea flowers from the garden which they made into posies to give to the residents. The residents’ energy immediately changed and spirits lifted as the children sang nursery rhymes and action songs for them. ‘When you’re Happy and you know it’, was a particular favourite, with everyone joining in. This was such a lovely way for the children to connect with the community. 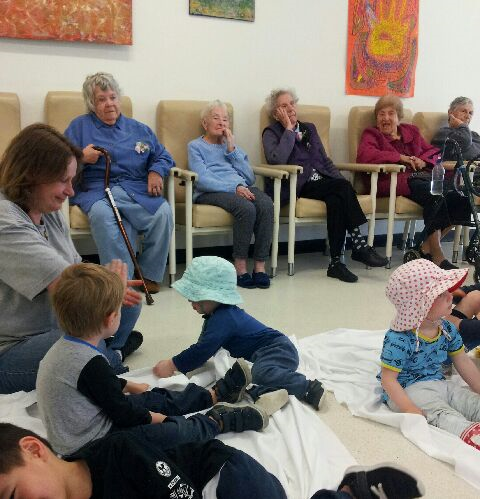 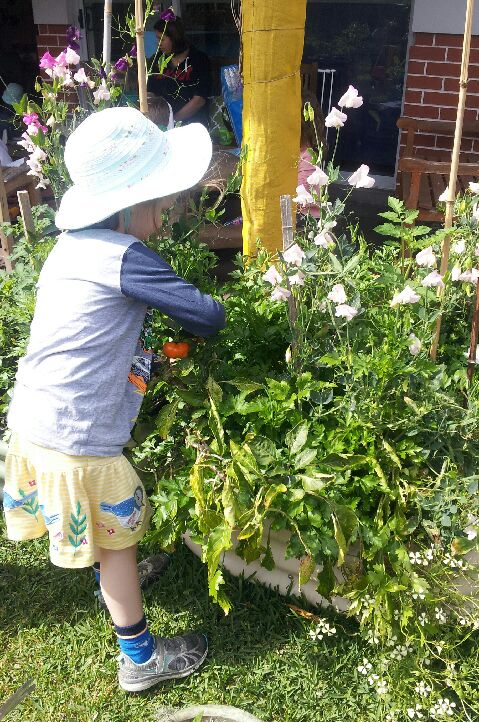 Spooky things were happening this week at playgroup! The children had fun dressing up in costumes, and they created pumpkin faces using paper shapes, and mummies were made using bottles and paper. The children enjoyed splashing around finding spiders and bugs during water play, digging to find skeletons in the sand box and dancing to Monster Mash. We also read Spot’s Halloween. 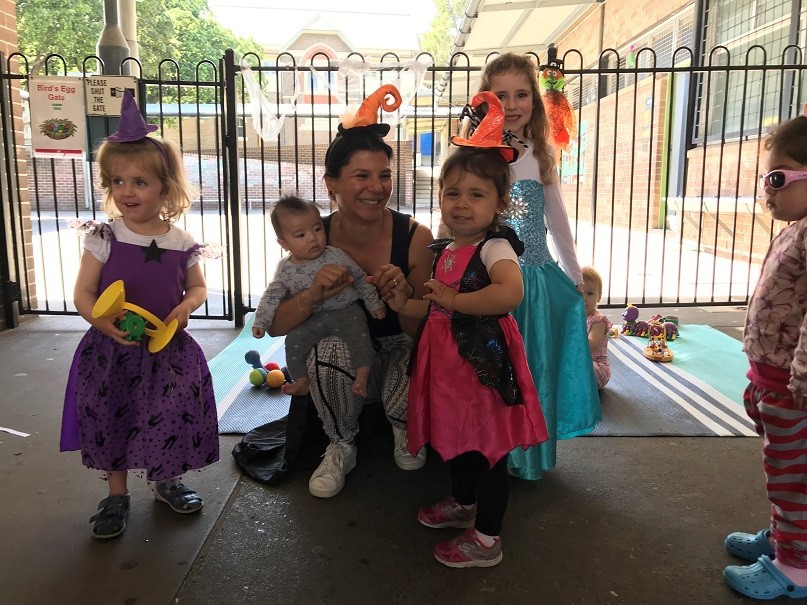 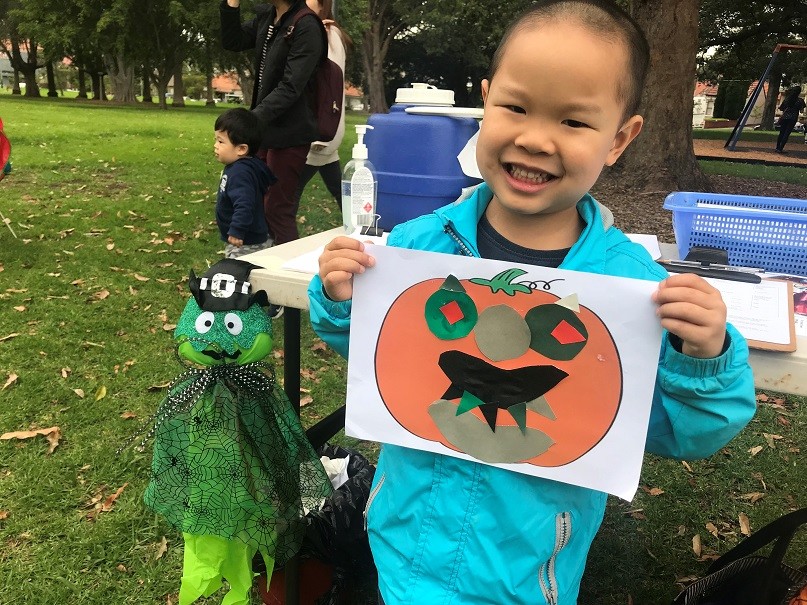