This week at The Infants’ Home: November 5 to November 9

The children have been showing interest in insects lately. Starting with spiders, then moving on to other insects, the children explored the similarities and differences between the creatures and this then progressed to more detailed observations including body shapes, specific features, the specific features and exploration of the habitats in which the insects live. The children have been incorporating their imagination into this play. A ‘bug park’, using both natural and found materials, was created, together with jungles and forests. The concept of camouflage was explored as the bugs were strategically hidden within their habitat.

This environment help to support all aspects of children’s learning, and it invited conversations between children, educators and families. It also helped to promote opportunities for sustained shared thinking and collaborative learning.

The children in Johnson House Toddlers participated in celebrating Diwali this week. It was a great opportunity for the children to celebrate diversity in their play environment and to develop respect towards different cultural celebrations and beliefs. As the part of the celebration children were introduced to an art and craft activity using recycled materials. The theme of the art work was making Diwali fireworks through painting. We used the paper towel roll to do the painting. Children showed great interest in the activity, and making their own Diwali firework. 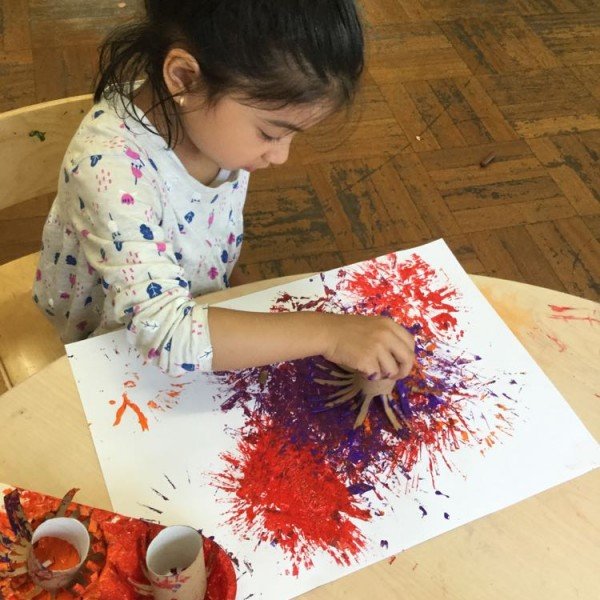 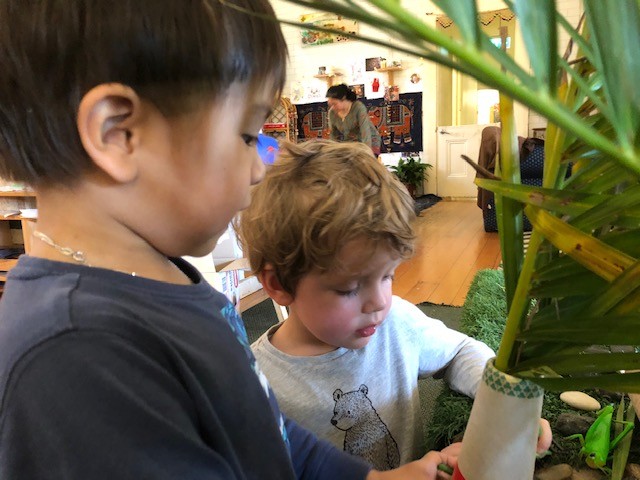 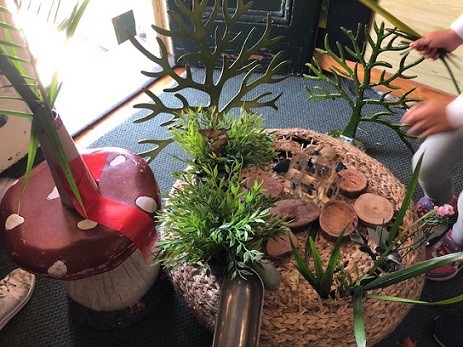 Over and over again the children have shown interest in having discussions about dinosaurs. We talk about where they live, what they eat, and also compare their shapes and sizes. This morning a child walked over with a dinosaur saying “Dinosaur needs food, let’s go sandpit”. He took a handful of sand, saying “open mouth”. After a few seconds, he laughed “Dalia, dinosaur eat leaf and meat!”. His peers laughed, seemingly amused by his joke. Another child responded by picking a piece of leaf, saying “eat”. Some of the dinosaurs were covered in sand, and one child commented saying “it’s dirty”. He called the educators, saying “dinosaurs need bath”.

Together, we created a dinosaur jungle in the sandpit. When asked what they thought the dinosaurs need, a child answered “trees”, and another suggested “water”. “Rock” another added, holding a piece of rock. Another child said “baby”, as she giggled and brought more dinosaurs to the jungle. When their peers arrived, they rushed outside to see our dinosaur jungle. Together, we filled up a few bowls of water to add into the jungle. “I like this idea Dalia” a child said. The children showed enthusiasm and excitement as they explored the dinosaur jungle play area. They enjoyed bathing, feeding and creating dinosaur foot prints. Educator Dalia was fascinated with the conversations this experience inspired the children to have.

They also seemed to relate their own experience and transfer them into this pretend play. A child spoke about how she goes to the beach with her mummy and daddy and that she plays with the sand like the dinosaur. Another boy exclaimed, “My dinosaur eat chicken, I like chicken”, whilst his peer repeatedly stomped around pretending to be a dinosaur. Pretend play provides the children with the opportunity to use imagination to make their play fun and exciting. Along that journey, the children are developing their language skills and social skills and use symbolic play to assume other identities.

Over the past few weeks the children in Murray House Toddlers have been looking after some silkworms. Educator Alisa thoughtfully followed up on this interest with the children, inviting them to observe a pictorial representation of a silkworm’s life cycle. She pointed at each stage of the silkworm’s life cycle – egg, larva, pupa and adult moth. We also looked at where our current silkworms are in this cycle and infer that they are in the larva stage as we have seen that some of the silkworms are producing what they call “fluff” or the white threadlike structure that are tangled in the silkworms legs – the silk. It was explained to the children that soon the silkworms would be wrapping the silk around themselves. Fortunately, the silkworms in the Infants program are already starting to form a cocoon and the children were able to witness this phenomena and were in awe to see this. The children refer to the moths as butterflies, and we are excited to see them when they emerge from the cocoon! Just like the very hungry caterpillar in Eric Carle’s book. 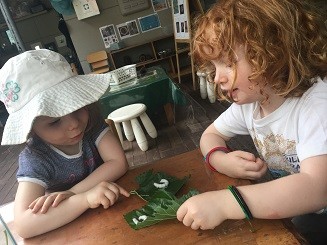 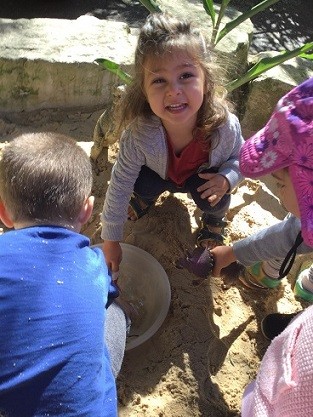 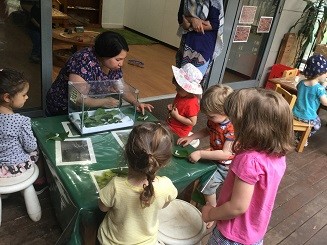 A recent project has emerged with a small group of children at Robinson House. We have been learning about the human body and wellbeing. This interest began after a few children had bought in a selection of books about the human body to share at one of our gathering groups. Together, we decided to have a closer look at the books, eager to find out interesting and fun facts about our bodies. Reading and looking through the books encouraged a lot of shared thoughts and ideas from the children about the images as well as knowledge about the human body. Some of these discussions enabled us to identify basic body features, as well as discover new knowledge about our bodies. We were all fascinated to learn about the skeletal structure of our bodies, as one child recently shared his experience when he fractured his arm and had an x-ray at the doctors – “In a magic machine”. As conversations continued, the children all showed off their muscles when we got to the section about the muscular system, saying “Look, I have strong healthy muscles” and “Mine are big and bumpy”.

Our knowledge has been evolving each day and recently we decided to trace out the outline of one of our peers on a big piece of cardboard to create our own model interpretation of the internal human body. Each child had a turn at tracing around their peer as we collectively went around the circle.  We have begun adding some of our organs, such as the brain, heart and lungs to our human models. With conversations about our bodies continuing, the children are also considering setting up a doctor’s surgery over the next few days within our learning environment. This will enable us to explore through play what might help keep our bodies well and healthy, as well learn about the role doctors have in helping us with this. During one lunchtime, the children had a friendly debate over whether we should make signs or posters about what is ‘healthy’ food and what is ‘sometimes’ food. 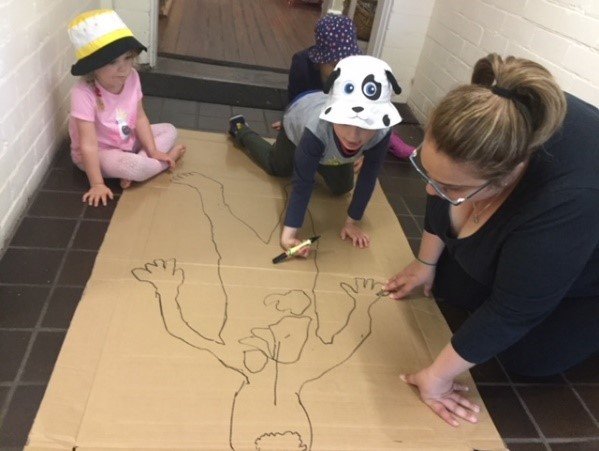 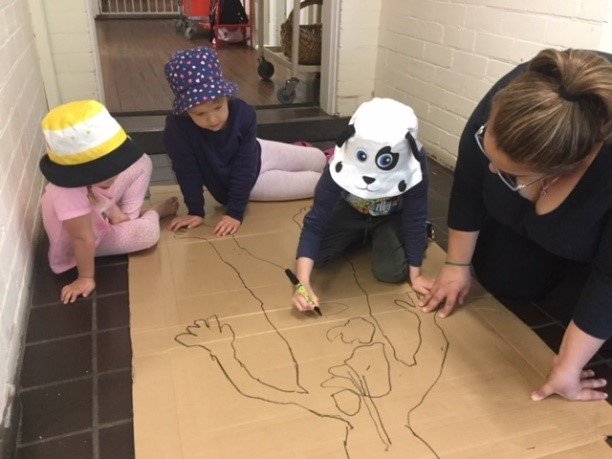 At Family Day Care Sydney Wide Northern Beaches, educator Vicki recently upcycled a chair and included this in her program to become a ‘bug catcher’. The children explored the various bugs with magnifying glasses and discussed the insects that they found inside the bug catcher. 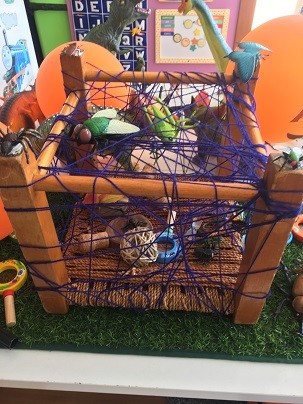 Playgroup was all about water and the sea this week. We made fish bowls, cutting fish and seaweed out at our craft table. Sea animals were also made at our playdough table. We sat in boats, singing songs and catching fish, and water play was enjoyed by all, especially with the warmer weather we’ve been having. The also had the opportunity to talk about colours and what happens when you mix colours together, and they used a syringe to mix colours and create patterns on paper. 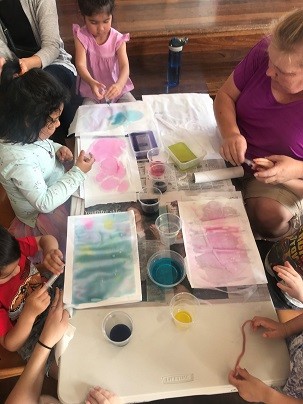 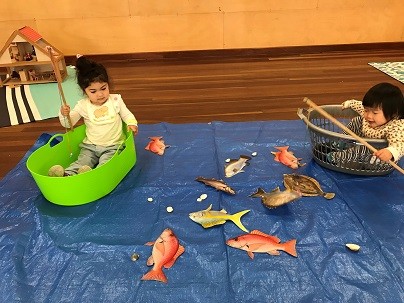