The children influence all of our cooking decisions in the Gorton House preschool and this week saw us embark on two very different cooking experiences and events for different reasons.

The first was making pizzas. The decision to make pizza stemmed from the children discussing that pizza was one of their favourite foods on The Infants’ Home menu. Some children who attend on Tuesdays expressed such disappointment in not ever having pizza in preschool (because it is not usually on the menu on Tuesdays) that we decided they could make their own pizzas—on a Tuesday of course—and plans were made!!! The children documented their preferred pizza toppings and the ingredients needed and sent me off to go shopping. Discussions triggered debate about pineapple, and who’d have thought, but most started as ‘pineapple deniers’ for pizza toppings. However, once they bravely tried some uncooked little pieces of pineapple, most children were delighted with the taste and eagerly added some to their own pizza. Each child had the opportunity to put their own individual pizza together using their desired toppings. We cooked these in our own little oven indoors. There were smiles and sounds of satisfaction all around—such a privilege to be able to offer such a joyful environment each day!

Then, more cooking, but with a different purpose. The campfire is another very favoured cooking space, and this week we anticipated the farewell of one of our preschoolers. This child and her family are returning to Germany for the next six months to see family—how much we will miss them! We always try to make farewells special for each child and family, and we seek the child’s input on what they wish for, and this child told us “Stockbrot”! Stockbrot translates directly to “stick bread” in German, and the child told us she would like to make this bread on the campfire in the same way she remembered having done with her family once when they were camping. After talking to the child’s mum, we learned more about this bread, and in such a short time plans were made and sticks were gathered from the goose paddock.

When the special day came, children and educators worked together to prepare the dough and let it rise and then to light the fire and share in the special farewell treats that the leaving family had also prepared for us. Each child used their own little piece of dough, winding it around their own stick.

We had two such beautiful, special days, both revolving around good food, a warm campfire, and conversations about love and caring for and missing people who are special to us that sometimes move away.

Photos were taken, and we know that we’ll see the family who are leaving again on their return, and we look forward to welcoming our preschooler’s little baby brother into the Gorton House family when needed.

In Gorton House infants our babies are always looking forward to engaging in fun learning experiences. Most of these learning opportunities cater for the ongoing interests of the children who are developing and refining their early years skill sets, and experiences are primarily focused around ‘belonging, being and becoming’. Recently I observed many of the younger children in our room showing an interest in developing various physical skills, such as standing, crawling, taking their first steps, climbing and all sorts of other physical activities. At the same time, the children who are reaching their toddler years are showing interest in engaging in more advanced physical movements such as dancing to music, using obstacle play resources and climbing.

Therefore, in the last couple of days, we enjoyed some interesting learning experiences to support children’s current interests and wellbeing. These included music group times and making boats out of recycled resources such as cardboard boxes, and having an awesome time riding in these together.

Through music group times, children are supported to develop their physical skills, as well as many other skills such as becoming more social, making connections between their peers and teachers, improving problems solving skills and developing early literacy skills. 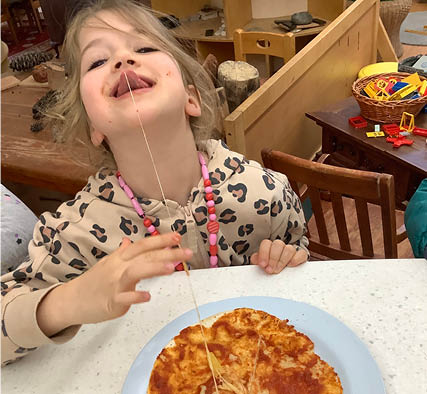 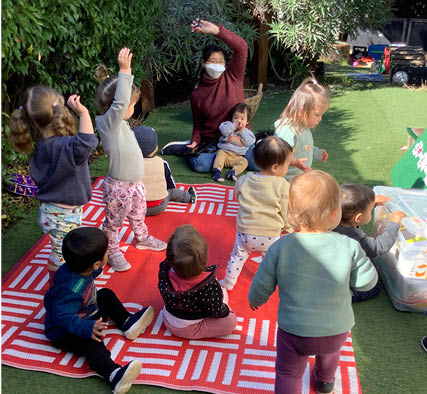 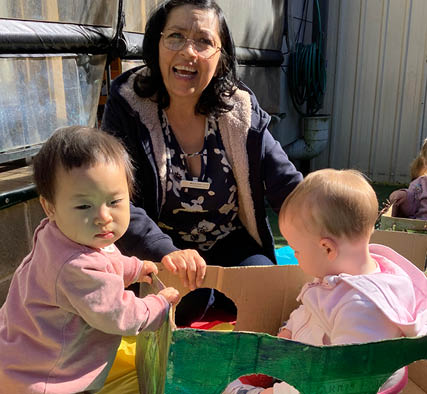 The children in Johnson House preschool are showing great interest in cooking, and this week we made fruit kebabs. We collected fruits that were different colours so that the children could use many colours in their kebabs. The children helped to cut the fruit, and they decided which fruits to use based on their fruit preferences. We also discussed trying some fruits that perhaps they hadn’t tried before to see if they liked these too. We spoke about how the many different coloured fruits made it look like a rainbow.

The children used their senses while touching, smelling, looking and listening. We discussed how some fruits are crunchy in texture, while others are soft, and how some fruits are extra juicy. Threading the fruit onto the kebabs was also a great way to practice fine motor skills. Lots of fun was had by everyone! 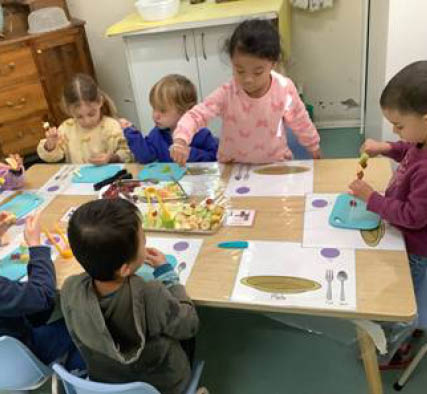 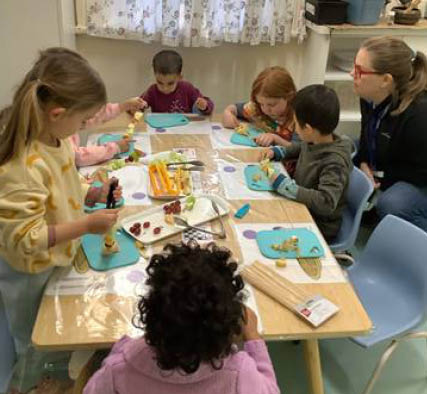 In Robinson House, the children and I have engaged in some dialogic readings of a Dreamtime Story, ‘Silly Birds’, written and illustrated by Greg Dreise, as well as two other familiar books linked to this year’s Reconciliation Week theme: ‘Be Brave. Make Change’. In these readings we challenged and further developed our understanding of cultural diversity, the celebration of differences within our community in terms of cultures, beliefs and faith, and how small changes can impact others. Dialogic reading is essentially the process of having a conversation about the text in a book through prompts and questions. This uses a book’s text and exchanged dialogue to actively engage children in building their reflective and critical thinking and literacy skills, as opposed to ‘passive’ reading where the children only listen to what is read to them.

We read three books, which is an impressive feat, and also beneficial in building children’s concentration and persistence. Through these readings we drew parallels on how the characters in the books made changes to make things better for their communities and for social justice.

These are the books we read together:

‘Silly Birds’, a Dreamtime Story about a mighty eagle named Maliyan who is respected in his community and has the ability to see and hear things from a long way away. However, upon meeting Wagun, another bird who is disrespectful to his Elders, Maliyan begins to lose sight of his values and he follows his new friend around, which in turn makes him and his friends not care for their country. Maliyan doesn’t realise that what he is doing is wrong until he faces disappointment from the Elders he trusts and respects. He eventually changes back to his kind and noble demeanour in observing and listening to his peers, through the advice of the Elders, and he rallies his friends to clean up their country. The book teaches the values of respecting the Elders’ wisdom and experience of the world, the importance of looking and listening before speaking, and learning to choose your company wisely.

‘Greta and the Giants’ is written by Zoe Tucker and Zoe Persico. It tells the story of a young girl named Greta who inspires change by protesting against the giants who are destroying the forest. The protagonist is based on Greta Thunberg, a Swedish environmental activist who is known for challenging world leaders to take action against climate change. The children were inspired by her brave act to protest against the giants, despite her standing alone. Greta’s courage to stand up for what she believes in inspires others to join her crusade and convinces the giants to stop destroying the forest and help to make amends.

‘Ruby’s Wish’ is a story by Shirin Yim Bridges which we read often with the children, and which promotes discussion about social justice and cultural diversity. It tells the story of a young girl named Ruby who comes from a large family and who is very studious, as evidenced by her hardworking nature. However, she has to compete with her male cousins who have more privileges than she does, and she faces societal expectations that she marries and learns domestic duties on top of her studies. Her real wish is to go to university, which was not a social norm back in the day. However, with the support of her loving grandfather, she is able to fulfil her dearest wish and she inspires change within the wider community. 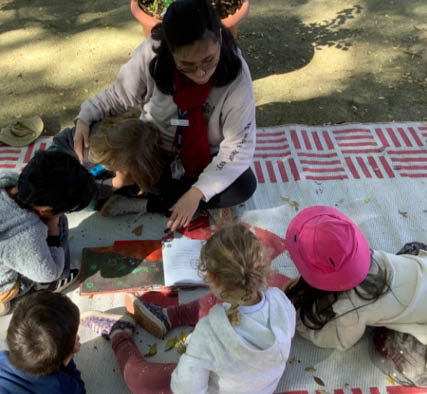 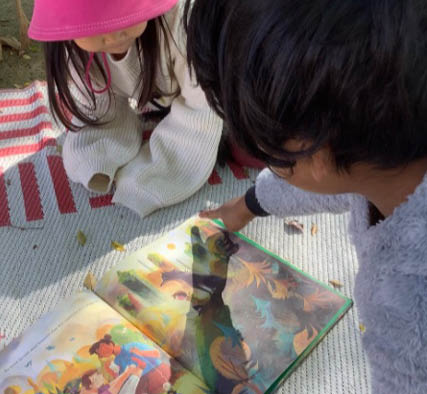 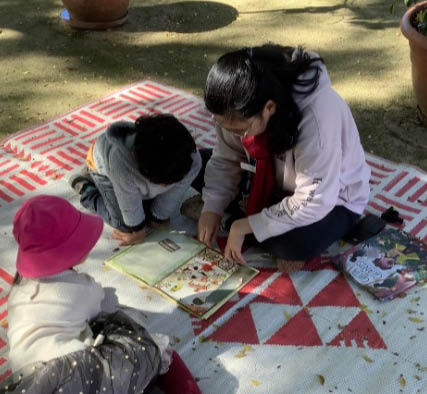 How lovely that the sun shone for us this morning at Family Day Care Sydney Wide’s Randwick playgroup. We have such an amazing outdoor environment to offer. The children naturally gravitate out there on most visits. We are working hard on embedding Indigenous learning into our daily practices. We have displayed signage representing the Gadigal and Bidjigal Country on which most of us in our area live. This is mounted above our bug hotel, another activity that the children contributed to recently.

Today we placed some ethically sourced Indigenous fabric on a tabletop as a painting provocation, and used similar fabrics to make bean bags. The children then practiced their hand-eye coordination skills by trying to throw the bean bags into a basket, as well as balancing them on different body parts.

The children also enjoyed making playdough with the unusual ingredients of hair conditioner, cornflour and food colouring. There was a lot of measuring, estimating and squashing going on! 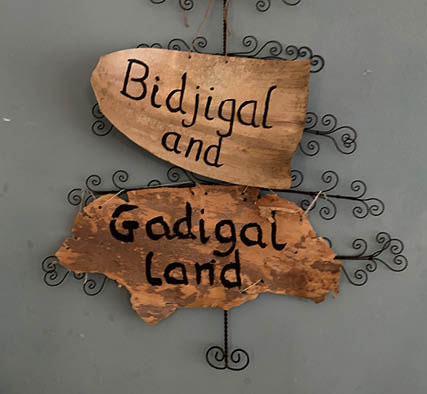 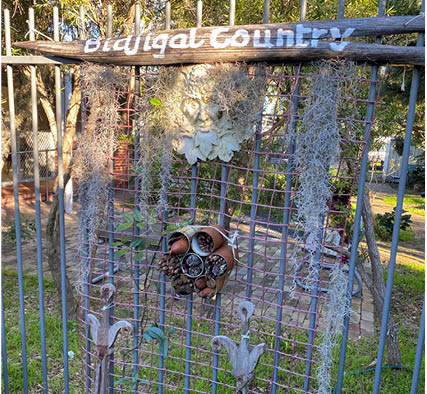 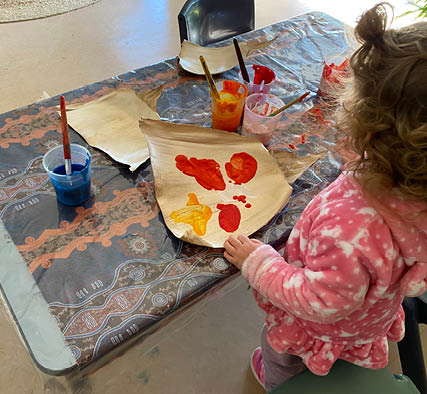 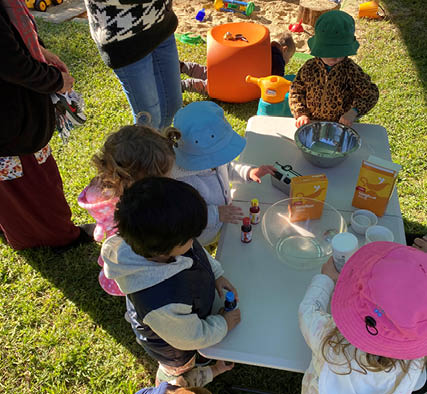 We held Red Bug Playgroup in our Rigby House Community Space again this week as Ashfield Park is still too wet and soggy for us to drive the big red bus onto.

The wind was blowing quite strongly, but that didn’t stop us from having a great time! We put on our jumpers and beanies and headed into the outdoor area for some fun.

The strong wind provided us with an amazing opportunity to use our natural environment to have fun and learn. The wind scattered an enormous number of leaves around the playground, so we used rakes and brooms to sweep the leaves up and we put them in a box. This was a great gross motor activity that involved us using our whole bodies. We were also able to listen to the sounds that the dry leaves made as we picked them up and again discovered new words to describe the things around us that we could see, hear and feel.

Sometimes the best learning activities come from the world around us! 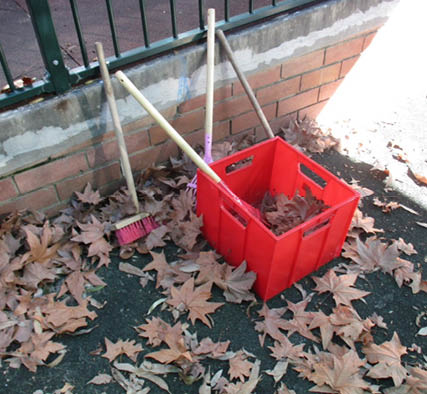