In Gorton House preschool we actively seek to provide children with open-ended resources and loose parts, in particular recycled items that can be used in play for a variety of purposes. Often these include items such as empty food packages, for example boxes and other containers, cardboard cylinders such as paper towel rolls or supermarket shopping catalogues, large thread spools, strips of fabric and leather and collections of bottle tops.

These materials often foster creative thinking—we see children look at these collections and suddenly they are sharing their thoughts, ideas and plans. Children work together to collaborate around how materials might be used and what might be created. These ideas often influence their play for sustained periods afterwards. The learning we see is holistic and varied. Some benefits include:

We saw an abundance of this learning just this week as the children used empty food packaging, boxes and other items to create. Two children had earlier in the day built a car out of a large box, and they were driving this throughout the morning, and taking much loved Kutukulung for rides around the space. Together, the children resourced their play, and later they drove past the art area carrying some no longer functional CDs. A child commented “You should use those CDs as wheels, or steering wheels for your car.” This instantly triggered another thought for the driver — “I’m going to make a car for Kutukulung to drive around in, their own little car.” The mission had been set, and they were bouncing with enthusiasm! This child was determined that the wheels on the car she made for Kutukulung must turn, so alongside an Educator, they explored the role of an axle in allowing wheels to turn and we had everything we needed in our loose parts and recycled arts items. The child selected the box to fit the car size she envisioned, and her experience with art tools meant she was able to carry out the techniques needed to pierce holes on bottle tops so that the CD wheels wouldn’t fall off the axles… Another younger child was inspired and was also supported to build a car, but she also made a little person to sit inside and drive it.

Another child was inspired by a carton that had previously held apples, and they decided to make a beehive, then a bee, adding a face and flapping wings, and was then further inspired to draw, cut and paste honey inside the hive.

This is the imagination and creativity we strive to foster—thinkers and innovators, children who are driven to have a vision and see it through. One educator recently visited reverse garbage and brought some interesting loose parts which we added to the block/building space—more creative genius, but that story is for another day!!!!

The children in Gorton House toddlers’ room have been looking at healthy lifestyles and eating choices over the past couple of weeks. To this point we’ve explored juicing several different types of fruit, made our own juice combos and nectars and had several tastings and cooking experiences where the focus has been healthy options complimented by exploring the various cultural identities in the room.

Today we extended this interest by planting an orange tree that centre director Mel gifted Gorton House as a parting gift last week. It was a very hands-on experience and the children excitedly postulated about when and how much the tree would fruit!

There is always much going on in Gorton House infants, and recently one of our interests has been around exploring making things move, or the play schemata of trajectory and rotation. A schema of play is simply a pattern of play behaviour, which young children will engage in repeatedly, as they gain understanding and explore the world around them.

Educators have been amazed at the many ways the children have discovered to explore these schemata in our space. It has been exciting to dive into these investigations with small groups of our children throughout our days together.

Some of the ways we have been exploring have been: 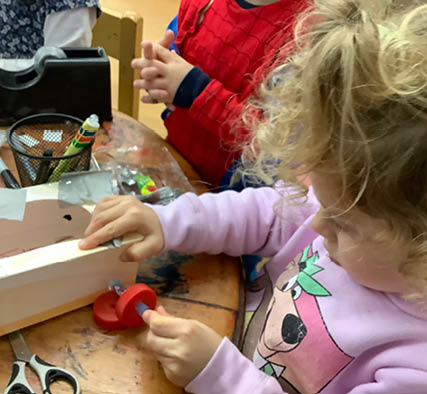 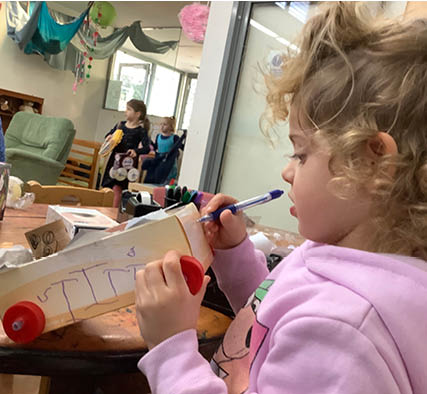 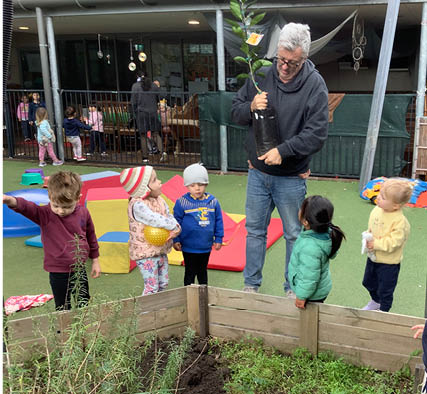 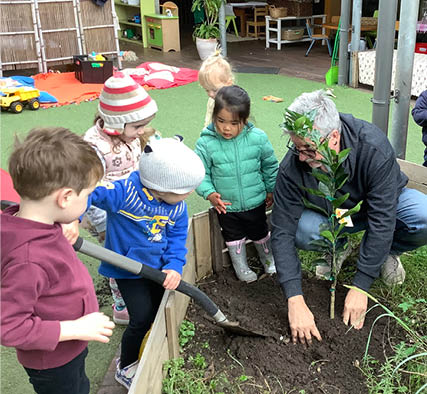 The children in Johnson House preschool have been busy preparing props for our fire station. This week the fire station became operational, and it has been very busy for our little fire fighters who responded to a variety of fire emergencies. The phones hardly stopped ringing while the fire engine’s sirens kept wailing “Ne-no! Ne-no!” The children dialled 000 to report that there was fire in a building to the fire fighters. The children quickly picked up the call then put the fire jackets and helmets on. They also designated among their peers who would be the captain fire fighter and the driver, while the rest were part of the team. These roles were determined by the helmets they used. They drove the fire engine and put out the fire in the burning building nearby using the water hoses and fire extinguishers. They rescued some babies trapped inside the building too! Afterwards, they went back to the fire station and waited for the next call to save more houses and other people’s lives.

This experience continued to foster children’s social skills as they increasingly cooperated and collaborated among their peers in negotiating roles and sharing the resources at the fire station. They continued to learn about the world they live in as they shared their knowledge about fire safety among their peers, and acted out and practiced what do in a real emergency. As they took on the roles of the fire fighters, the children were also developing an understanding of the noble and important jobs community helpers such as fire fighters do to save lives and properties. 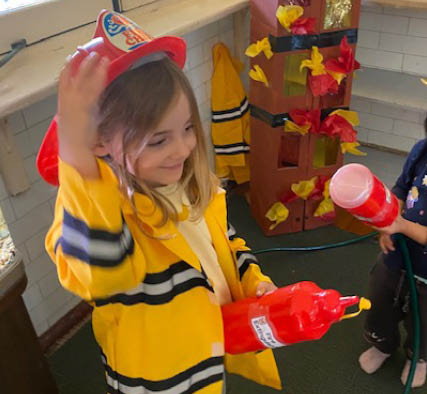 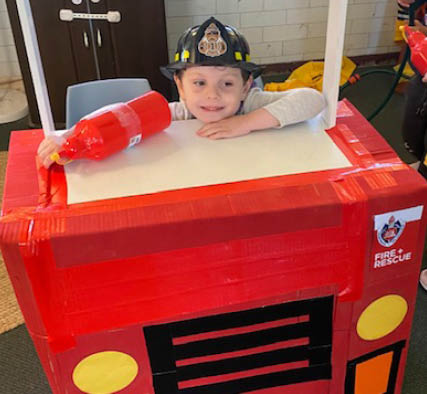 Today in Robinson House the children had the opportunity to discuss Reconciliation Week, with the theme this year being ‘Be Brave, Make Change’. The children engaged in a literacy experience, reading the stories ‘Finding Our Heart’, written by Thomas Mayor and illustrated by Blak Douglas, and ‘Wilma’.

The story books helped to facilitate a discussion with the children about Aboriginal and Torres Strait Islander people and cultures, Australian animals, the meaning of each colour on the Aboriginal flag and their respect for country. The illustrations in each picture book are wonderful, detailed and demonstrate for children the shapes and patterns that are used to show the animals and environment that are so important and to Aboriginal and Torres Strait Islander people.

As the children engaged in the discussion they were building on their knowledge and awareness of Aboriginal and Torres Strait Islander culture, diversity and respect for the natural environment. At the conclusion of our literacy experience the children had the opportunity to choose to explore the colours, patterns and shapes they had observed in the books’ illustrations as they painted on bark pieces.

Yesterday in Robinson House we completed a huge STEAM challenge that saw us embarking on a collaborative construction project which involved following a design brief. This involved a great deal of cooperation, communication and creativity, and resulted in an incredible car being created that we enjoyed playing on for the entire day yesterday, and even revisited today!

Today we extended this experience with another challenging task, this time developing an airplane from a selection of loose parts.

We again gathered as a group and first discussed what a plane looks like, the important features and how we intended to create a plane using the available resources.

With so many wonderful ideas being presented, and a great deal of excitement building, it was time for us to begin!

The plane had wings, a tail, a cabin with seats, jets, an engine, a nose, stabilisers and a rudder, to name just a few of its features.

The plane set off for its maiden flight to America via Canberra; it was fuelled using the large black pipes, oil was also added and snacks were even served!

What an exciting morning of construction that led to even more incredible moments of dramatic play. It was amazing to see everyone working together so creatively to build such an impressive plane that we could all enjoy.

What a great team of Aeronautical engineers you all proved to be! 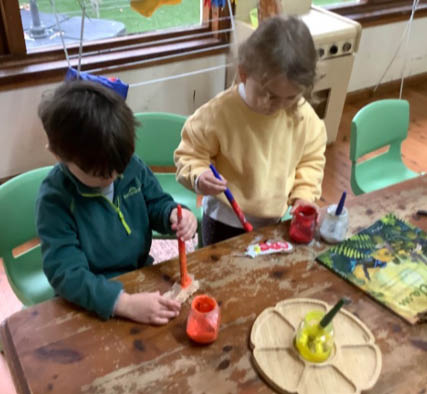 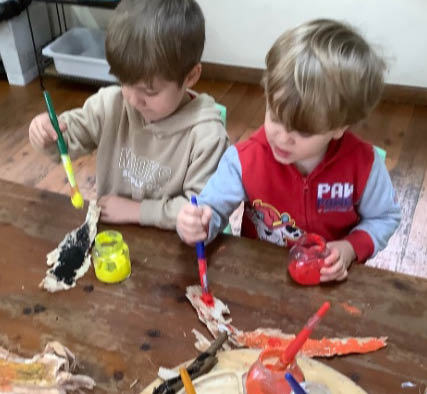 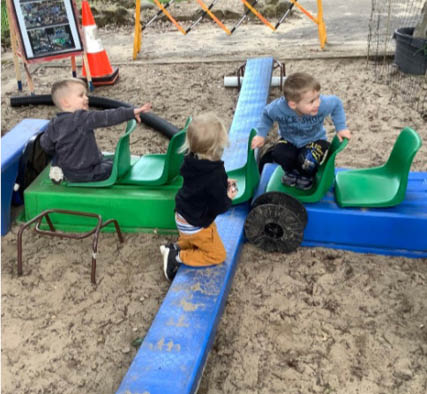 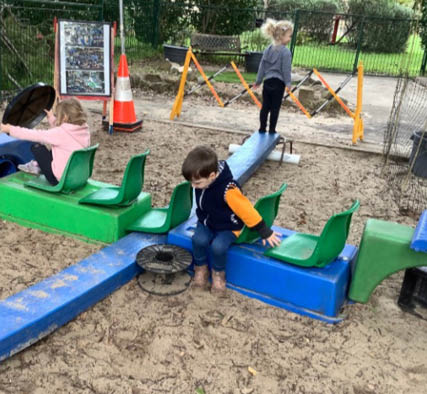 An important part of the Family Day Care Educator’s role is to undertake regular evacuation and lockdown drills with the children in their care. These are undertaken every three months and include both a lockdown and an evacuation drill conducted on different days. Educators are provided with different scenarios to practice, and sometimes an Educator Support Officer (ESO) will take part in the drill to ensure that practice is meeting National Quality Standards.

ESO Barbara recently visited Kim’s family day care service to undertake a fire equipment check and Kim conducted an emergency evacuation with the children while Barbara was there, using the sound of the fire alarm as the prompt for the children to evacuate the home.

Kim took great care to ensure that the children understood the nature of the emergency and ‘modelled’ how to respond to the supposed fire in the home, with Barbara demonstrating how to operate the fire extinguisher and pointing out the fire blanket and how this can also be used.

Once the “fire” had been attended to, the children proceeded outside to wait at the Partial Evacuation point with Kim who “phoned” 000.  Kim then sat with the children for a short period of time waiting for the “fire engine” to arrive.

These drills are a great way for the children to learn about real life situations and how to respond to them and Kim demonstrated beautifully how these sorts of drills can be embedded into educational practice. 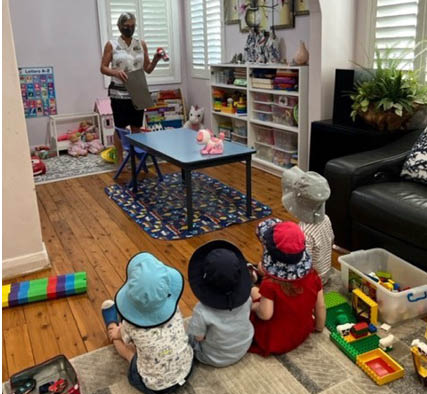 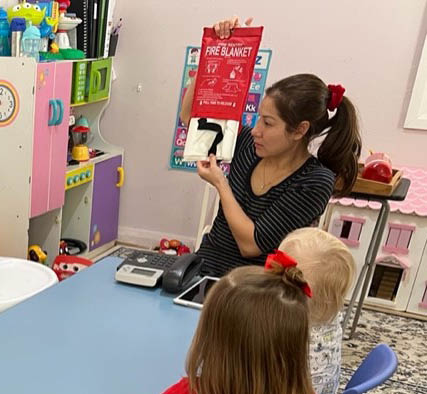 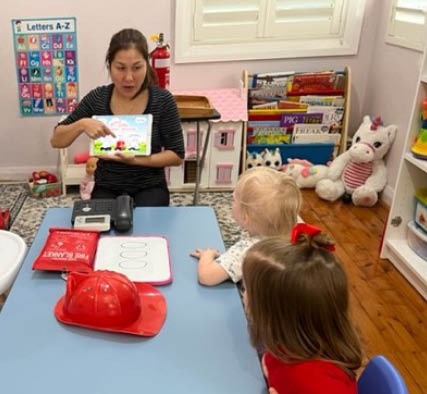 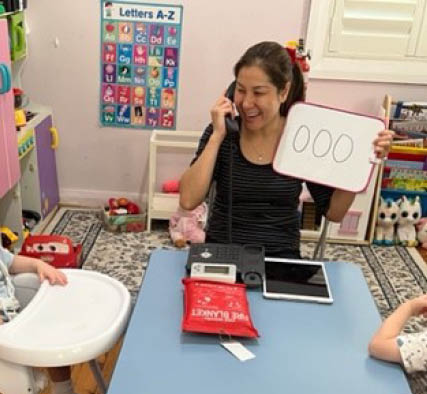 This week our Red Bug playgroup was once again held in Rigby House as the grounds at Ashfield Park were still too wet for us to use. However, the weather on Monday was beautiful, and we were able to open the downstairs area for children to play in. The children had a wonderful time digging in the sand and exploring the different textures of the leaves and sand in the sand pit.

We also explored the very strange experience of cutting cooked spaghetti. This activity allowed us to practice our cutting skills and have the sensory experience of touching the cold, soft spaghetti. Some children added to this activity by using bowls and spoons from the kitchen play area to make ‘food’.  Parents were surprised that their children were touching the spaghetti as they normally don’t like touching unfamiliar textures. Using known items in a sensory way encourages children to experiment and make connections between familiar and new experiences. 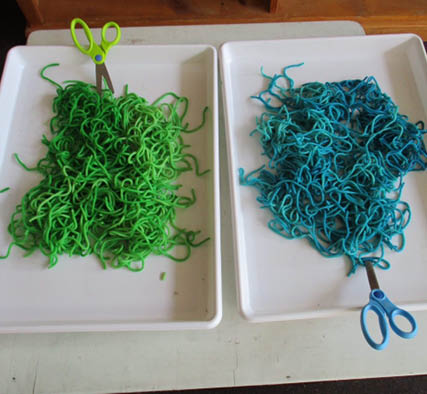 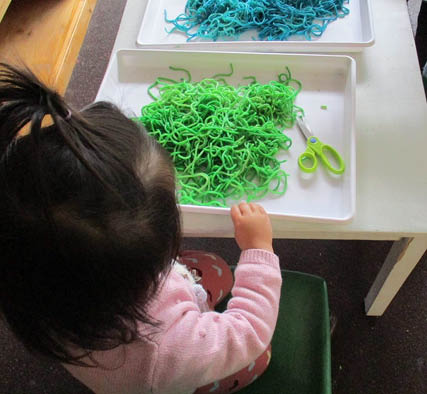 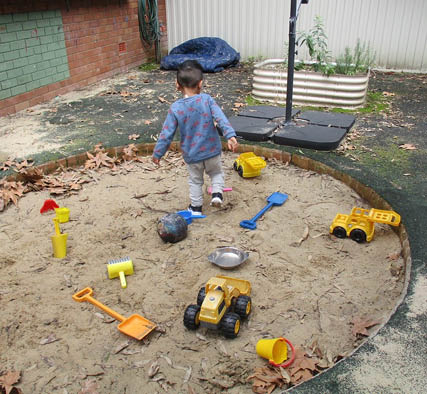