This Week at The Infants’ Home 4 March to 8 March

We have been focusing on a range of group games in the Johnson House preschool program lately. While the games may vary in objective, the intention of implementing such experiences is embedded in the notion of helping encourage and facilitate positive social interactions and concept development among the children. Skills such as turn-taking, listening, following instructions and working together are practiced in such games. Along with this, the children are also building on their knowledge of numeracy and literacy as they learn to identify numbers and letters which are the basis of many of the games played. 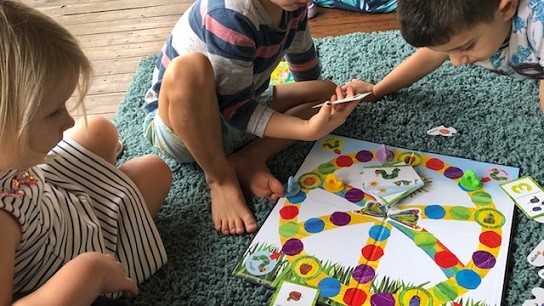 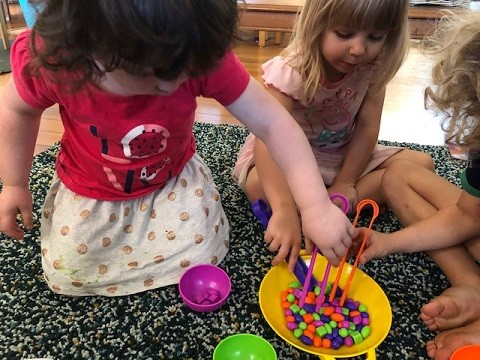 The educators in the Murray House infants have created and made some changes in the outside sensory corner with scarves, mats and pillows this week. The children have been engaging in a variety of sensory play experiences and educators have observed the children resting on pillows and exploring in the corner behind the scarves, for example, grasping the scarves to pull and to swish them. Some children seemed to be enjoying their ‘moment of solitude and looking around with wonder and interest. Educators have also observed some children engaging in dramatic play and patting the dolls to sleep. It was lovely to see the way the children initiated play from their interests and unique approaches, and how the sensory corner facilitated and encouraged their play.

Last weekend on 3 March, many communities across Australia were involved in ‘Clean up Australia Day’. The educators in Murray House toddlers have been intentionally introducing the concept of ‘REDUCE, REUSE, and RECYCLE’ in our program. The children were invited to go for a walk and visit the rubbish bins storage area, and learned about different types of rubbish being placed in the colour coded bins.

The children found a blue bin and had a look inside the bin, where they found paper scraps that matched the picture on the bin. Discussions were had about the red, yellow and green lidded bins. The children learned that the yellow bins are used for recycling items, meaning that the materials are separated from the general rubbish and be made into something new and useful. They also found out that the green bins are used to gather compostable materials and vegetation such as plant clippings and stray branches, and that the red bins are used to throw away rubbish that can’t be reused or recycled and is taken to landfill. 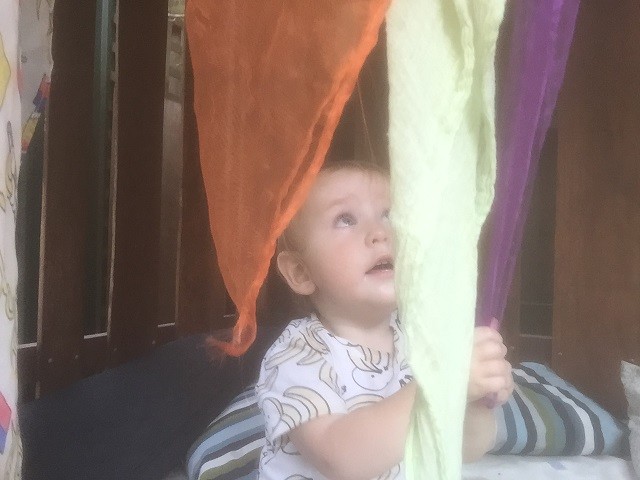 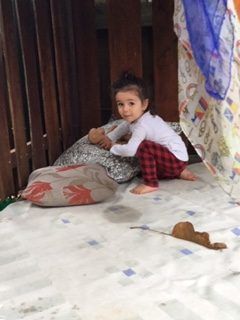 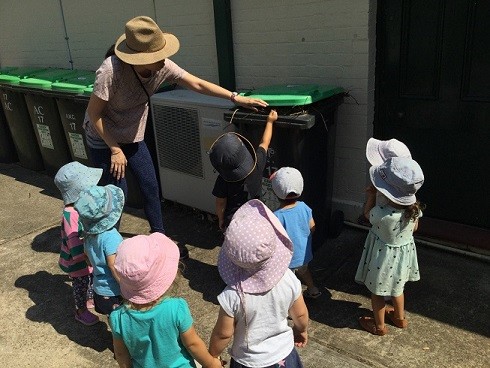 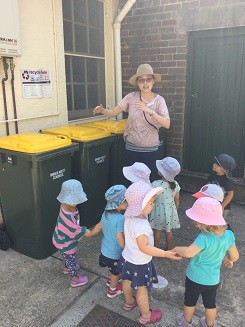 Since the Rigby children discovered the cicadas in our trees, they have become more aware of the insects and other small creatures that are in our outdoor environment. Recently, while checking on the progress of our ripening tomatoes, the children discovered a snail. Now, every morning the children go looking for snails. At first they looked everywhere in our playground, however now they have refined their search, as they have become aware that the snails will most likely be in or near a garden bed or pot plant.

The children have been observing the snails and then returning them to their ‘home’ in the garden.  They have been drawing their idea of snails, and discussing these ideas with educators and peers. The children are thrilled to see that snails can hold on vertically to a surface and not fall off. They are interested in the snails’ shells and how fast or slow they move. Many children have commented that snails don’t have legs, and they are wondering how they move without them.

To help the children expand on this thinking the educators placed snails on a transparent frame, and invited the children to observe their movement from below. After observing the snails in this way, the children are developing theories about how snails move without having legs. They have noticed the silvery trail that snails leave behind, and are wondering if this is what makes them move.

Our Rigby scientists continue to explore, observe and question, and gaining more knowledge about snails and the natural environment. They were very excited to discover ‘baby’ snails in our garden. Now the children are discussing the size of snails, and drawing the conclusion that snails must have mummies and daddies. 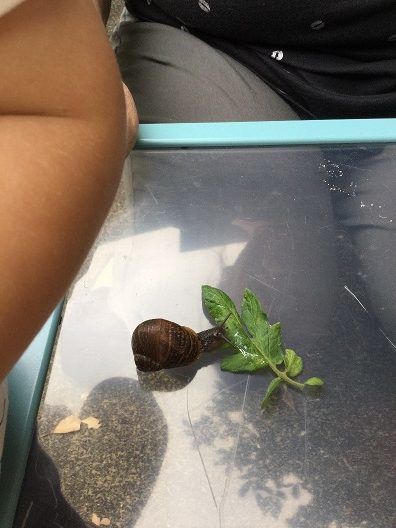 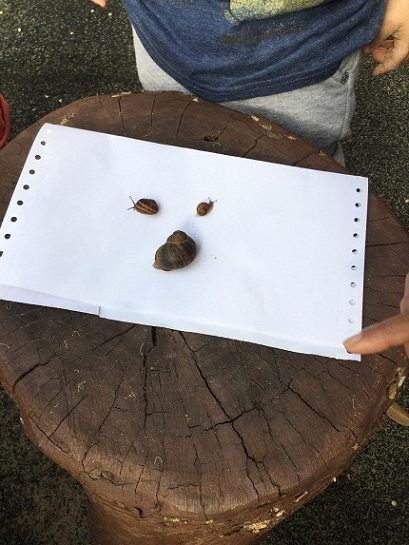 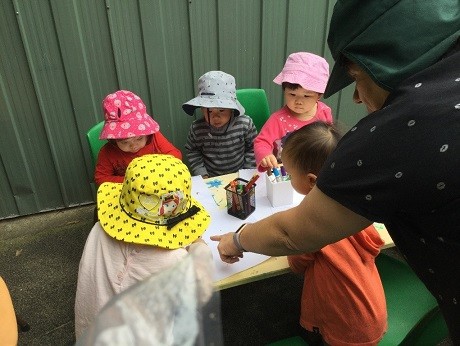 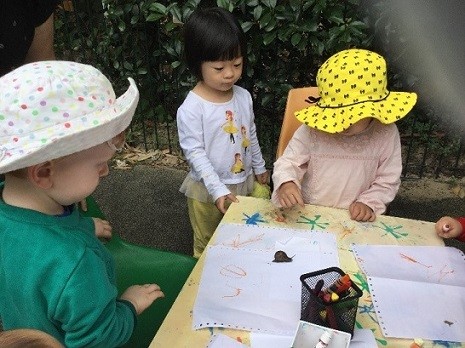 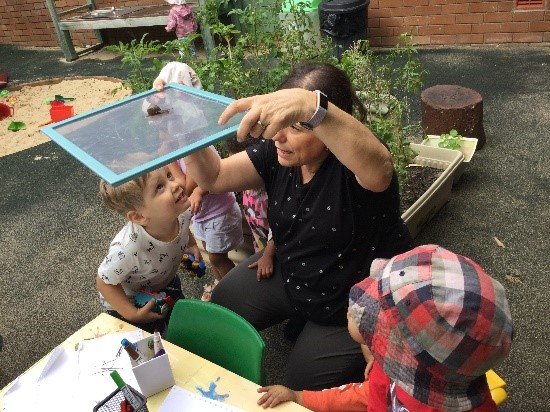 Over the past four weeks our new early childhood teacher Miriam has been getting to know our centre, partly through making music together with Robinson House children. Dancing and singing songs under the tree and during Gathering, pretending to be rocket ships and sleeping fish, and playing ‘Who Stole the Cookie from the Cookie Jar’ have all been woven into the day to day activity of Robinson House. Miriam loves the way that music encompasses imagination, bodily movement and coordination, and cognitive stimulation. Most of all, she loves the social nature of music-making, of creating something together. After playing songs with the children she has been inviting them to play her guitar and sing songs while she makes the chord shapes. In this way the children have been sharing songs with one another while learning how to strum the guitar with a pick.

At Family Day Care Sydney Wide our educators have been exploring sustainability in a slightly different way.  On Wednesday, February 27 it was World Polar Bear Day, and at the Randwick South Sydney and Northern Beaches hubs’ playsessions the children interacted with Arctic ‘small worlds’, set up with giant blocks of ice, polar bears, seals and walruses. The children interacted with the activity in different ways, according to their developmental ages, with some using sensory and exploratory play to learn about the connection between ice and water, while others interacted with the materials through imaginative play. Older children were involved in a STEM (science, technology, engineering and mathematics) activity using droppers filled with water and salt to dissolve the ice. This was not only a basic lesson in chemistry, it also helped to kick-start an important dialogue with the children about climate change and how the Polar Bears’ world is changing and disappearing and questioning what we can do to help. 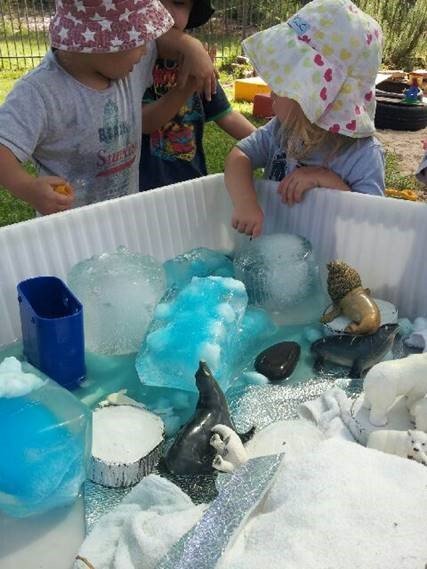 Last week was a fun week at playgroups. The children developed an interest in frogs, searching for them in rice, sand and water using tweezers and hand scoopers, and using magnified glasses to examine their finds. The children also made crocodiles that ate the frogs! During group time the children danced, sang ‘Five little speckled frogs’ and read ‘Incy Wincy Spider’.

This week at playgroup it was all about ducks. We created ponds for the ducks to swim in using sand and crepe paper. The children engaged in water play and playdough using rubber ducks. For group time we danced around the parachute and pretended that we were ducks jumping into the pond. Alicia, our Social Worker from The Infants’ Home, also popped by Red Bug to say hello to everyone and tell our families about the services available in our community 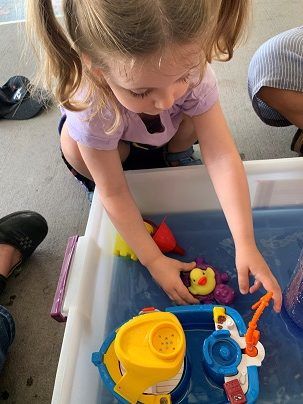 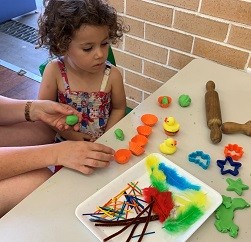 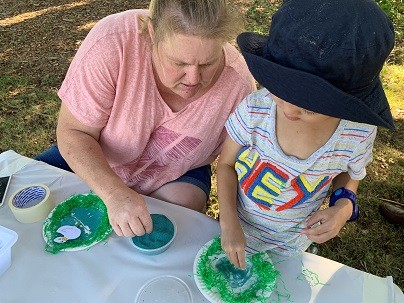 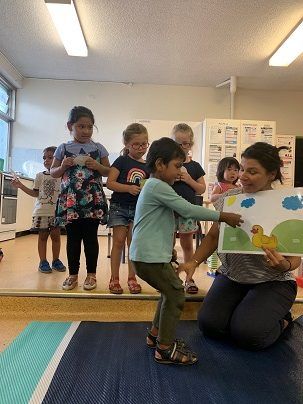 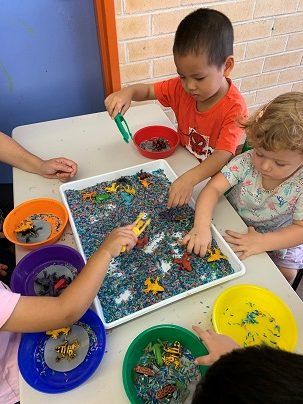