“There was a change in government”, a child told us in Gorton House preschool as we chatted on Tuesday about our weekend, and the children began to share their stories about going with their families to vote on the weekend. We talked about voting occurring so that the people of Australia could choose the Prime Minister—everyone gets a say, and the chosen Prime Minister has the job of being in charge of Australia and making sure they are listening to the people about what is fair, and that sometimes laws are made, or changed to make sure Australia is safe and fair for everyone who lives on this land.

“What does he look like?”, a child asked when I mentioned Anthony Albanese’s name and told them he had had actually been to The Infants’ Home a few years back and met some of the then Gorton House preschoolers. In fact, Mr Albanese had gifted us three flags at this event (the Australian, Aboriginal and Torres Strait Islander flags), and I shared the story of this with our current children. A small group came with me to the computer room so I could show them a photo of Mr Albanese with the past preschoolers (and we pointed out the older siblings of many of our current children). I told them about the dilemma we faced back then, when we realised that only one flag could be flown from our flagpole and about the advocacy of our preschoolers at the time who said that unless all three flags were flown, then none of them should be (the law states if a single flag is flown from a flagpole, it must be the Australian flag). Our current group of children also stated that unless the Aboriginal flag was flown alongside the Australian flag, then neither should be flown.

We went to re-visit the three flags that are proudly displayed in our reception area, and the children touched them and wrapped themselves in them, and we again discussed the meaning behind each of the colours and symbols on them. We talked about how significant this change in government had already shown to be, as already they had made two big changes. Whereas the previous government denied adopting the Uluru Statement from the Heart, the new Prime Minister’s government had immediately agreed to it in full. We talked about what that meant in regards to caring about, and listening to, First Nations People, re-reading the book ‘Finding our Heart’ by Thomas Mayor and illustrated by Blak Douglas, which introduces the Uluru Statement in a child friendly way.

We discussed other signs that this government acknowledged the First Nations People, by displaying all three flags for the first time behind the Prime Minister when he spoke to the nation (usually it’s just the Australian flag). Our talk of government and prime ministers bled into Thursday, which was Sorry Day. Some of us had been discussing how Sorry Day was such a significant day as the first acknowledgment by government of the injustice and harm done to First Nations People, and equally significant, the Apology. Several times throughout the day we gathered, at the children’s requests, to read children’s book ‘Sorry Day’ by Coral Vass and Dub Leffler. I informed the children ahead each of each reading that it may be quite sad, and some children explained that they would find this book too sad, while others acknowledged the sad content, but were still quite eager to read it. Each child’s response was respected and supported.

One of the key messages I was hoping to convey to the children was that the government in Australia is responsible for being fair and kind to all people, and that rules and laws are made to keep people safe. Sometimes governments make mistakes, and sometimes rules and laws may not be kind and fair to everyone, and that if that happens, people can speak up, talk to each other and tell the government so that unfair laws can be changed. Also, that if mistakes are made, these should be acknowledged, and that the people hurt by unfair laws should also be acknowledged. This this is why Sorry Day is important, because a very unfair and hurtful government act was acknowledged and the government said sorry.

I feel it can be a fine balance striving to raise socially aware children whilst also ensuring that we don’t create unsafe or insecure feelings. We reached out to invite families to share their thoughts and feelings around this learning. One family said “I think you’re doing a fabulous job by having these conversations with the children. You’re considerate of the individual tolerances and sensitivities which is most important. I guess if they are old enough to ask the questions, they are old enough to have the answers. Thank you as always.” 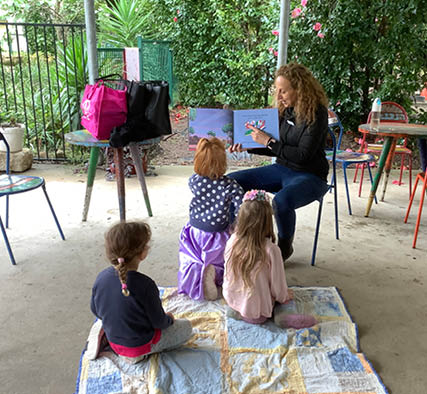 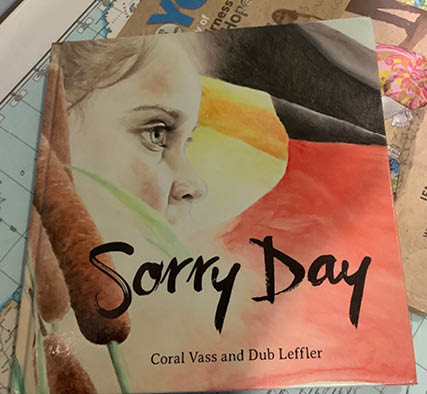 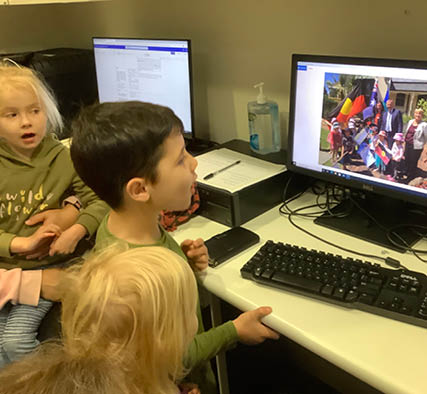 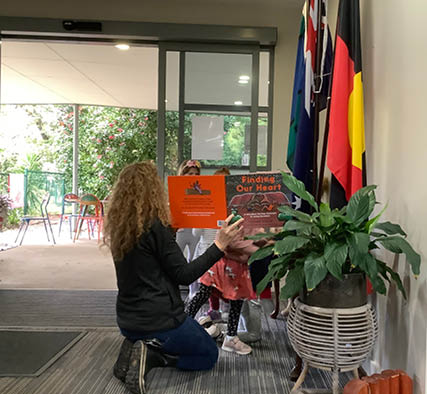 Following on from our previous painting experience in Johnson House preschool where children painted an individual Aboriginal flag, the children were invited as a small group to make an Aboriginal flag together that we can display in our preschool room. Everyone showed great enthusiasm to join in, and they enjoyed painting the flag together. We used a piece of fabric instead of paper this time. Before they started to paint, I showed the children a picture of the Aboriginal flag, and asked them if they knew what the colours on the flag represent.

Through this experience the children were learning about Aboriginal culture, for example, how the colours of the Aboriginal flag represent the earth and the relationship of the land to the people, and how important it is to respect the sun and the land.

The children in Johnson House toddlers have been enjoying using magnifying glasses to examine insects more closely and they have been asking many questions. “What’s this one called?”, “Where does it live?”, “What does it eat?” were just some of the questions asked. Some of us have been going for walks to see if we can find any bugs in their natural environment. We have also been discovering and learning about bees over the last few weeks. With the weather not being ideal, it’s been a bit tricky to find them, as we often observe that bees are much busier on sunny days, however the children all exclaimed in excitement when we managed to find one lone bee! The children discovered that the bees like the colour purple, and were therefore drawn to the lavender and rosemary bushes right near our native bee hive onsite. Through their own observations, and a little help from educators, the children are learning that bees do indeed love purple-coloured flowers, as well as other many interesting facts about bugs and bees. 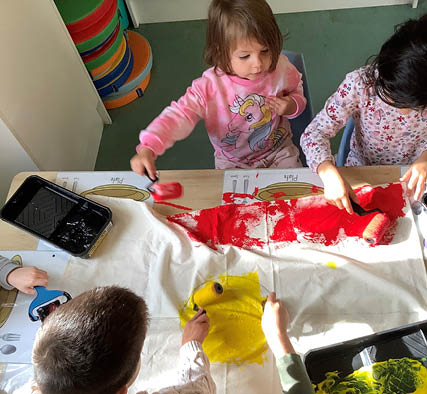 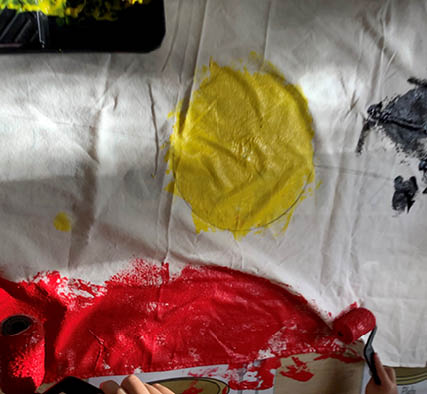 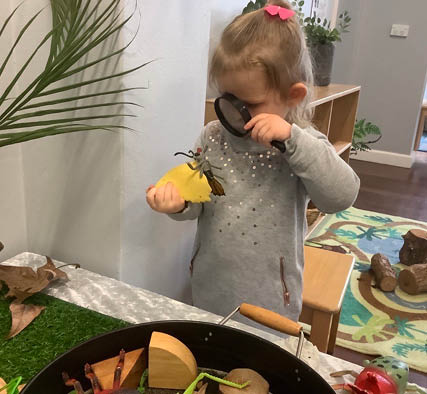 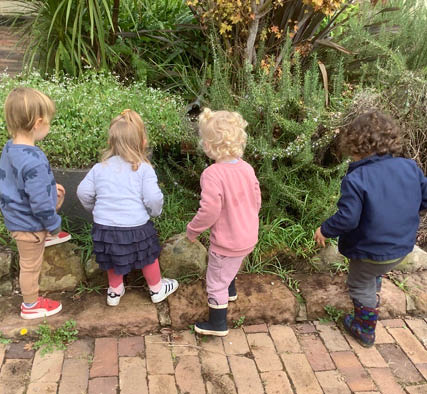 Educator Amna, at North Willoughby Family Day Care, sends families a daily newsletter to communicate with them about children’s experiences and learning. Last week, some of the observations and stories she shared with families included:

‘A parent had very kindly gifted us a new car set. It came with a road mat. I put the mat on the wall to create a vertical surface for play. By doing this, the children are now working on their bilateral coordination and midline crossing: the ability to move an object from one side of the body to the other without transferring it to the other hand, gross motor ability as they squat, stretch and move to drive their cars, shoulder and elbow stability and so much more.’

‘Reading about dinosaurs. We always make sure that we hold multiple literacy/book reading sessions throughout the day to instil in children a love of reading. We are also learning how we can look [up] new and interesting facts by reading. This week we are learning about dinosaurs.’ 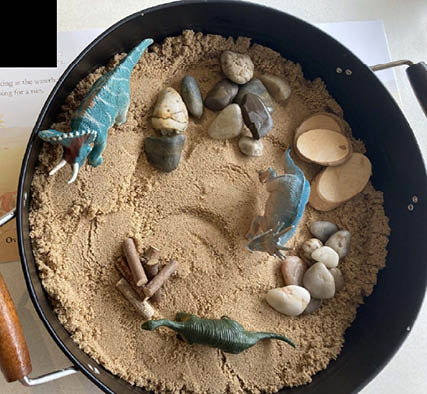 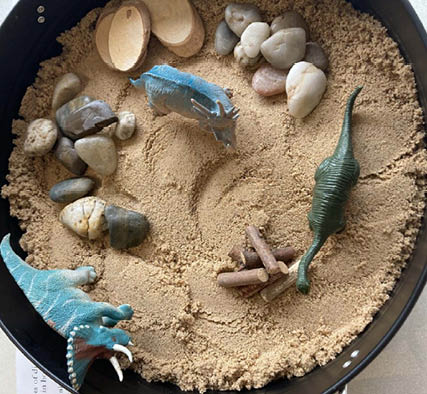 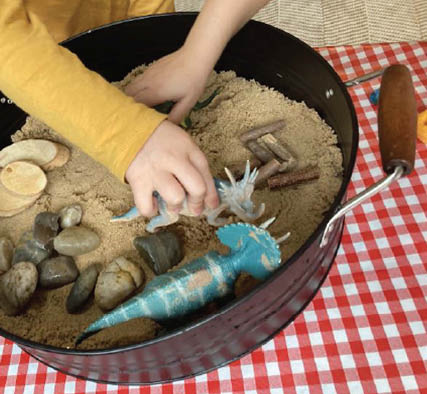 This week in our Baby Time Playgroup we held a mini-information session about introducing solids to babies.

We discussed topics such as:

Our Child and Family Health Nurse Denise talked about the importance of introducing solids to babies. She showed us how to teach babies to eat different kinds of foods with different textures and tastes.

Parents shared their opinions and experiences each other of different methods of giving the food to their babies. Most of the parents had already searched the internet for recipes and advice, but felt that this session was a good opportunity for face-to-to sharing of ideas. 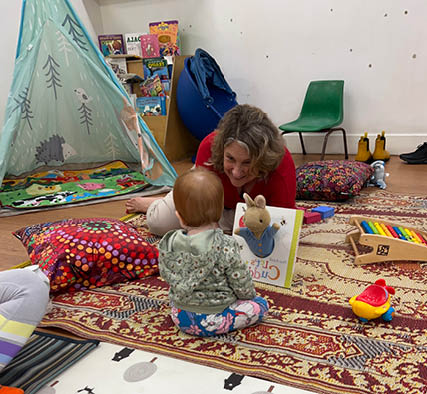 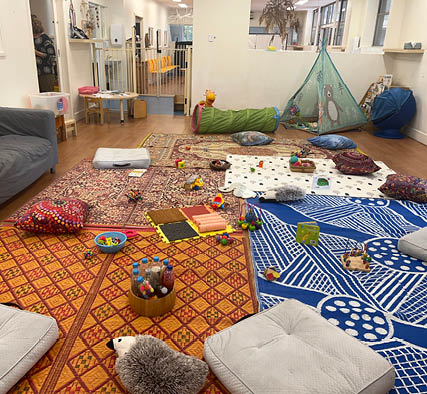