This Week at The Infants’ Home 3 June to 7 June

In Gorton House preschool room it’s quite typical for incidental discussions to occur between children and educators about Australia’s Aboriginal history and colonisation. We engage in learning towards reconciliation, all year round, so it was unsurprising that last week whilst playing within nature, under one of our favourite trees, one child suddenly had an idea. “Let’s pretend we are Wangal people and we are playing on our land and then the other people come and want to push us off our land.” This child and her play idea drew the interest of the peers around her. In this play, some of the children took on the role of being Australia’s first people (or Wangal people as the children understand they are the first people of the land we are on here) and the remaining children took on the role of being “the others”—the ones who came and took over Wangal land.

The children began to enact the events based on their evolving understanding of those early days–they played in the humpy that was erected in our space long ago, they pretended to fish in the waterways for food, and suddenly, the others arrived. Some children pretended to be babies crying for their mothers, while mothers tried to hide themselves and their children in the bushes. The others came and some children hid, while somne pretended to fight the others and try to stay on their land. Roles changed– sometimes ‘the others’ became Wangal people, defending their land.

The play began to change from fighting for land, to noticing the beautiful natural surroundings. One child found a flower, and announced that he would give it to his mummy. “A gift!” we announced, and celebrated this beautiful gift that Mother Nature had given us. Suddenly children were searching for more gifts and bringing them to the group, some with bark, stones, and sticks. So many gifts around us, and we spoke about how special Mother Nature is, and all the gifts she brings so we have everything we need—shelter, food and tools. Soon a campfire was built and children were fishing in imaginary streams and discussion evolved to all that Mother Nature offers, and how we in turn can respect and care for Mother Nature, just as Wangal people always did when they lived on, and with, and connected to this land.

National Reconciliation Week (27 May–3 June) is a very significant time on Australia’s calendar, yet we also strive to ensure that learning about Australia’s Aboriginal history and colonisation is embedded in the program for children all year around. We see how children begin to understand fairness and connect current events to those from the past. Another child, earlier in the week was engaged in a discussion with peers over an incident where a child was excluding some peers from playing in a tent. We explored the unfairness of saying some children couldn’t enter the tent with peers. One child said “Yes, it’s not fair to exclude people. Because it’s like what happened to Aboriginal people.” When we asked this child to explain what she meant, she said, “Well, it’s like when people excluded Aboriginal people and said they aren’t allowed to sing their songs, or speak their language, that wasn’t fair either, and it’s not fair to not let people play in this tent.” 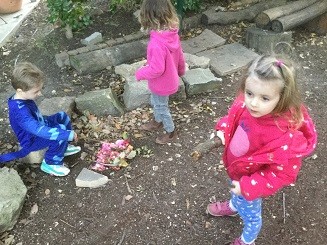 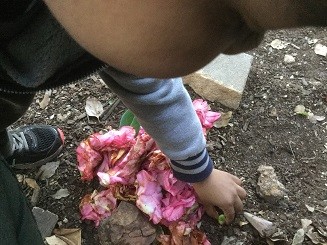 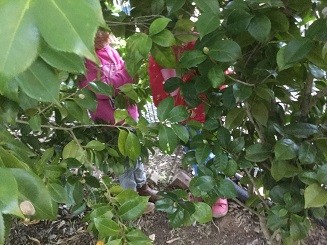 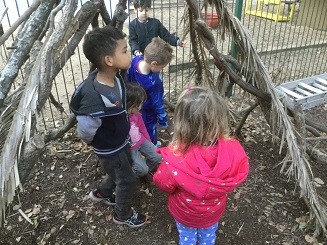 With the addition of new furniture to the indoor learning environments, this week in Johnson House toddlers the educators set up some new open-ended resources for the children to explore. The children were very enthusiastic and eager to build with and sit on the soft blocks. They were also eager to use their fingers and tongs to create patterns with the small shape blocks. As the children were engaging with these open-ended materials, they were able to express themselves in their play and to use the materials to explore and represent other things.

This week the children have been showing great problem solving skills as they have explored nuts and bolts. They have been exploring the mechanics of such provisions and working together to produce intricate creations. This experience has been an extension of the many fine motor experiences which are offered in the Johnson House preschool program. Fine motor skills involve the small movements that occur in the wrists, hands and fingers. They are developed through the use of smaller actions such as picking up objects between the thumb and finger, and as writing. Providing the children with a range of opportunities to use small movement actions helps them to develop their fine motor skills, which are important for completing many everyday life activities. 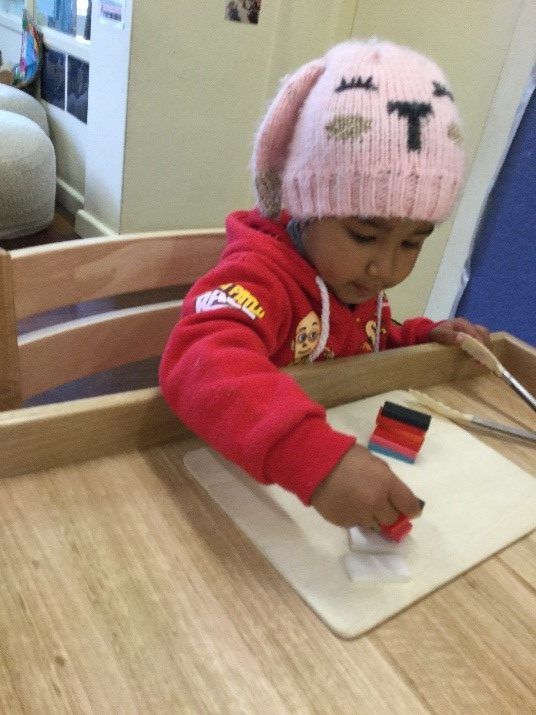 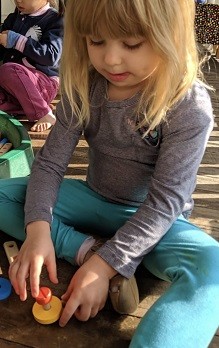 Over the past few weeks, the children in Murray House babies have been showing growing interest in reading ‘Where is the Green Sheep?’ by Mem Fox and Judy Horacek. The children waited in anticipation to turn the pages to see which sheep would come next in the search for a particular green sheep. The suspense and variety of dramatic expressions used by the educator in reading the book, kept the children curious and excited. Reading through the book, it can be observed that the children’s language and cognitive skills are being fostered through repetition of the phrase “Where is the green sheep?… here is the [colour] sheep”. The children are also developing familiarity with the use of prepositions such as ‘on’, ‘next to’, and ‘in’, the use of adjectives such as ‘brave’ and ‘scared in sentences,” action verbs including ‘wave’ and ‘jump’, as well as colours and their names.

Educator Dalia took the opportunity to provide play-based learning experience through creating stick puppets to use in her group time. She began by asking “Where is the green sheep?” and the children responded by closing their eyes and waiting for the next sheep to appear. The images with the sheep doing a variety of actions provided prompted the children to imitate the movements, and they have kept the children focused and wondering. The children demonstrated enthusiasm and excitement as the story was retold, and this also fostered their understanding of sequence and developing memory skills. 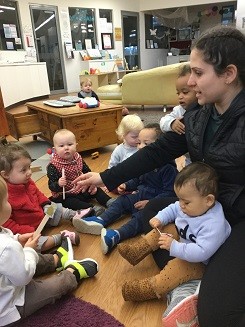 National Reconciliation Week (27 May to 3 June) was an opportunity to talk about the meaning of reconciliation, and to explore Aboriginal and Torres Strait Islander perspectives and history through stories, songs and discussions. In daily Gathering groups Robinson House’s educators and children discussed the history of British colonisation in Australia. A recurring question came up: if something happened a long, long time ago, and if we weren’t personally involved, do we still have to say sorry? It was a tough question to grapple with, and no clear consensus emerged. We did agree that if you need to say sorry to someone, it’s also important to try to make things better for that person. For example, if someone gets hurt, it’s not enough to just say sorry, we might also get a bandaid or icepack for them. Big issues like colonisation and reconciliation may seem too ‘adult’ or ‘serious’ for preschoolers, but at Robinson House we believe that children are capable of grappling with big ideas, and that it is important to nurture critical thinking from an early age. We understand that children are citizens whose opinions and thoughts on contemporary issues are relevant and important.

Educators have also been sharing a series of books from Burwood Library by Aboriginal and non-Aboriginal authors, all of which explore aspects of Aboriginal and Torres Strait Islander experiences. These include ‘The Rabbits’ by John Marsden and Shaun Tan, ‘Go Home Cheeky Animals’ by Johanna Bell and Dion Beasley, and ‘I Love Me’ by Sally Morgan and Ambelin Kwaymullina. A group time discussion of ‘I Love Me’ encouraged children to share what they love about themselves, and to think about diversity and difference, both within Robinson House and in the broader community.

Our understanding of Aboriginal and Torres Strait Islander perspectives and history is evolving every day at Robinson House, on Gadigal and Wangal land. 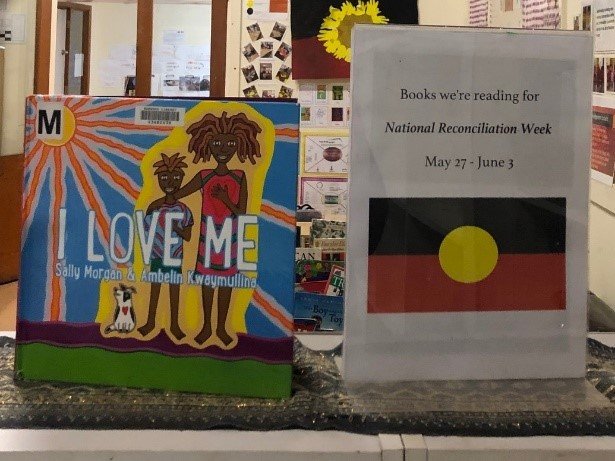 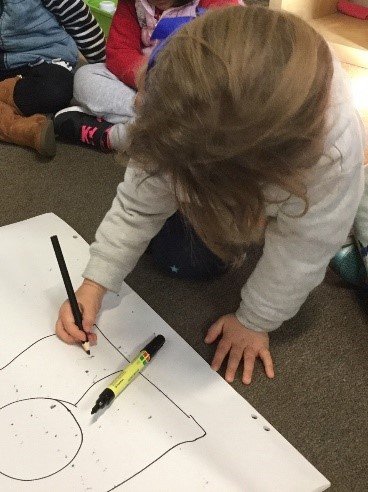 At educator Eszter’s Family Day Care Sydney Wide service the children readily engage with the provocations she sets up. Eszter makes many of her own resources, and she mixes these with natural materials and loose parts to create inviting experiences that allow the children to use their imaginations and extend their ideas. These open-ended experiences give children the opportunity to develop skills of creativity, inventiveness and flexibility, planning and reflecting. Who wouldn’t want to play with these enticing outback mats? 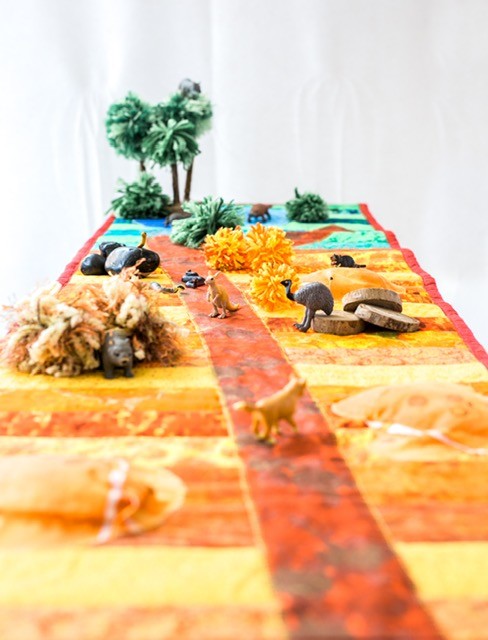 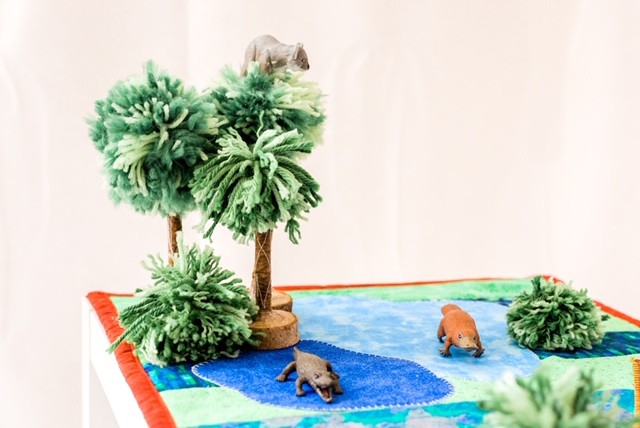 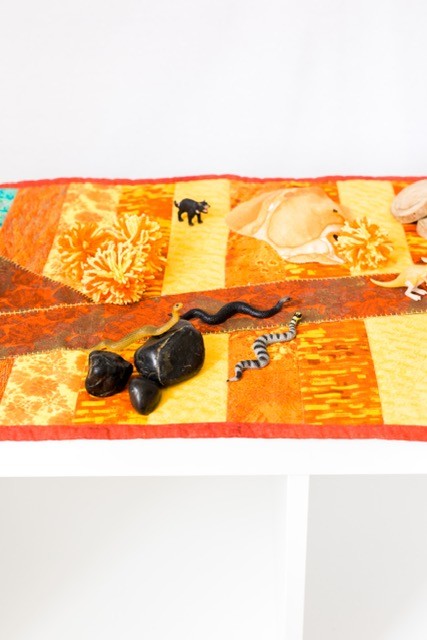 This week at playgroups it has been all about road safety. Children enjoyed making traffic lights at the craft table, playing with playdough and creating roads and buildings using blocks and stones. Finding cars in coloured rice and clipping cars on pipe cleaners to enhance their fine motor skills were some of the activities that were enjoyed. During group time we read ‘Go car go!’ and ‘The wheels on the bus’, and had a group discussion about the importance of holding hands and looking left and right for traffic before crossing the road, and that it’s always best to use a pedestrian crossing if there is one. The main message we learned was Stop look and listen for cars before you cross the road. Red Bug playgroup also had a visit from Isabelle, the Infants’ Home’s Post Natal Services Manager, to talk with parents and carers. 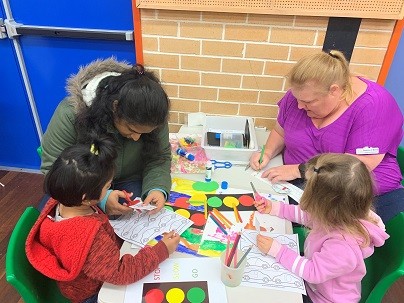 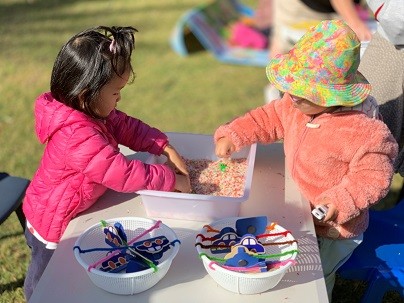 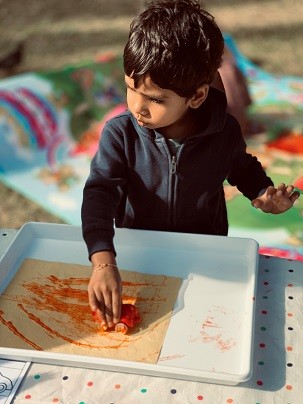 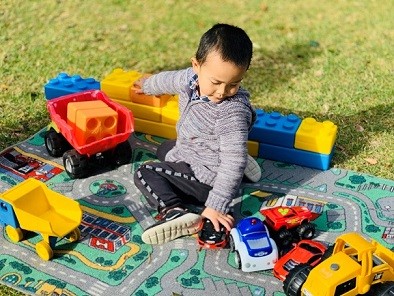