Exploring the sand pit and the natural environment often leads to exploring nature in general and, as was the case this week, natural phenomena such as volcanoes. Whilst thinking about what she might do in the sand, one child suggested to her friend, “Let’s make a volcano.” As several children gathered to help create the big mountainous volcano, discussions about volcanic eruptions evolved. Children shared their knowledge of lava being made of melted rock and very hot!

We discussed how we could simulate a pretend volcanic eruption by mixing two ingredients, vinegar and bicarb of soda, together. Enthusiasm grew as one child said that lava is red and that we could use red dye to make the lava red, but that lava also has orange and yellow in it. So we put in some drops of yellow dye too, to see if this affected the colour of the lava. A crowd of children gathered and they took turns eagerly adding soda to the vinegar we’d placed in a bottle in the core of our volcano. Squeals of delight erupted from the children with every simulated volcanic eruption. As each child scooped in more and more bicarb, the excited reactions grew—there was such enthusiasm as we observed the lava trickling down the sides, creating rivers of red!

Educators asked the children if they had ever seen a real volcanic eruption and while some said yes, on TV, others said no. The discussion of what eruptions and lava might look like in real life led to us gathering around the iPad to watch short YouTube video of various volcanic eruptions. We saw that Eloise was right—there were definitely orange and yellow tinges running through the red hot lava. We also learnt that some volcanos are under the sea and are called ‘submarine volcanos’. We watched a submarine volcanic eruption and Isaac was especially amazed at the way the lava settle in the ocean, creating a round patch of hard black spaces. “What is that round thing?” he kept asking, and discussion occurred about the effects of cold ocean water on hot lava. The lava goes hard again when it cools and turns to rock, creating new islands.

Later, two children gathered who were eager to draw volcanoes even though, as they both explained, they had never drawn volcanoes before. One child’s volcano was inside a box he explained and then he drew red hot lava shooting out as high as it could go. Another child added quite a detailed context to his drawing, even drawing on his knowledge of dinosaurs’ existence around some volcanic eruptions. He drew a volcano, surrounded by dinosaurs, where the lava erupted and ran down the sides. He then added trees and very carefully drew himself, and his parents hiding in the tree watching the dinosaurs. His twin toddlers weren’t in the picture he explained, because they were still in his mummy’s tummy. We look forward to further exploring volcanoes and where they may exist in the world—and whether they might be any within Australia! 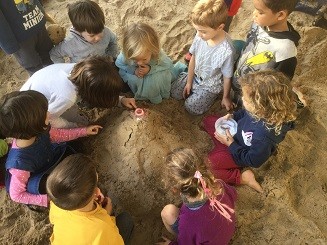 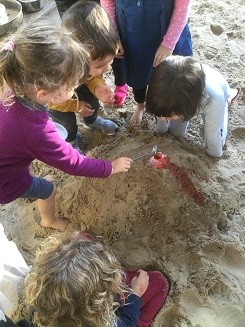 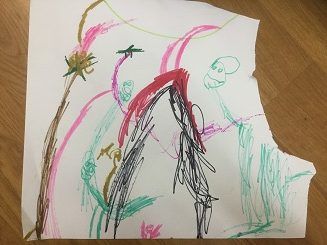 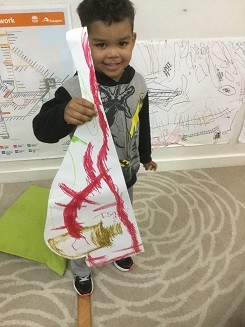 Recently the children in Johnson House toddlers have continued to follow their interest and enthusiasm in engaging in music and movement experiences. The children often choose to dance with the scarves to music and to move all around the outdoor environment. They always share laughter and joy with their peers as they move fast and slow with the scarves. As the children are dancing they are facilitating the development of gross motor skills by moving the large muscles in legs and arms, and they are also continuing to build on their spatial awareness, coordination and balance.

Recent conversations about the human body have prompted curiosity and interest in Johnson House preschool. X-rays on the light box, where we saw images of an ankle bone and even some insect skeletons, were a good talking point. A model of a human skeleton and nonfiction books in the space also encouraged conversation and gave children an opportunity to ask questions. We were intrigued to learn there are more than 50 bones in our hands, and 206 bones in our whole body! We then gathered some black paper and white oil pastels and created images of our skeletons. Some of us even traced around our hands and then added the bones. A range of provisions helped promote interest and encouraged meaningful conversation and opportunities to enhance further learning and development. 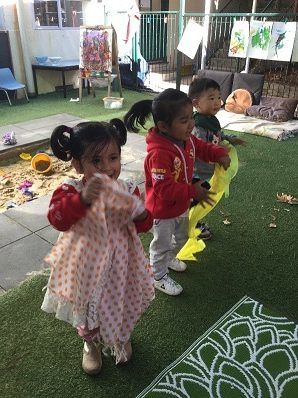 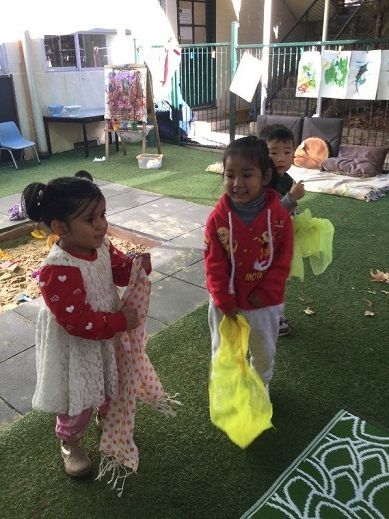 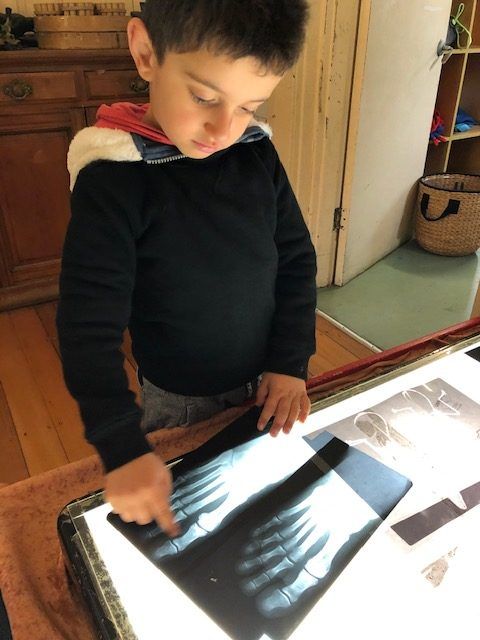 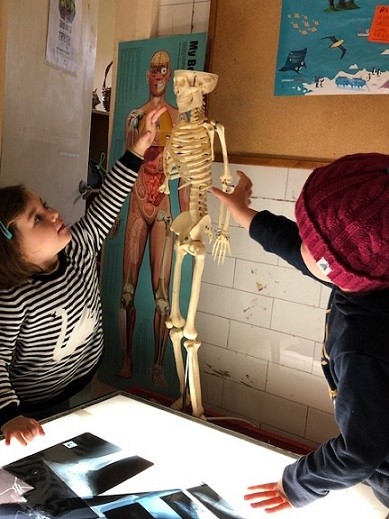 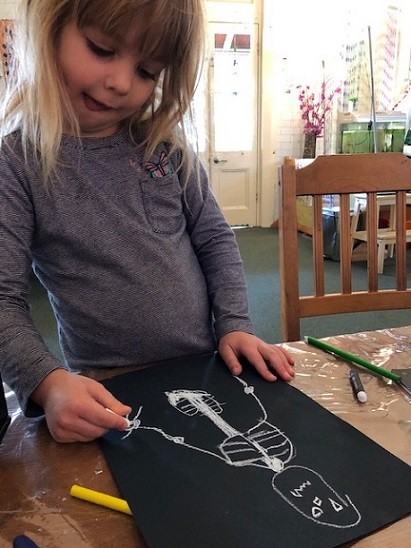 Connecting with our land–The Gumtree and Gumnuts

The children have been exploring native Australian flora through a range of experiences with educator Alisa over the past few weeks. They have been observing the textures, smells, and sights of many different types of flora, including Banksias and Golden Pendas from Port Stephens that Aunty Karen brought in and wattle flowers brought in by our casual educator Philomena. This week the children had a closer look at the flora around The Infants’ Home as they embarked on an adventure to look for a Eucalyptus or gumtree within the grounds. Perhaps drawing from previous experiences on Australian flora and fauna, the children had interesting discussions during the walk. They identified some flora based on books they have read. They also spotted a kookaburra and they started to mimic the sound that kookaburras make, which Uncle Terry refers to as “Kookoo-kakka Kookoo-kakka”. During this journey the children picked up dried natural materials which will be used for further exploration, including for craft experiences.

This ongoing exploration has allowed children to connect their learning from different experiences. Furthermore, it has continually develop their connection with the land and natural environment and helped them to develop respect and appreciation towards Australian flora and fauna. 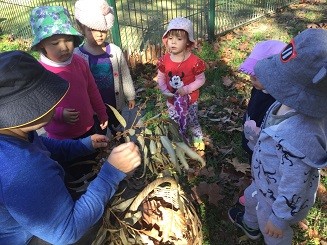 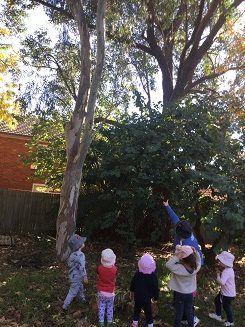 Over the past few weeks the children in Robinson House have been learning about ‘feelings’ and the importance of having a positive sense of self-identity for their wellbeing. Our learning has begun in small stages where we first learnt that at times it can be overwhelming to initially identify how we feel, especially when we can have ‘big’ feelings, and hard to then communicate how we feel with those around us. We all agreed that this can be challenging and confronting.

Throughout each day we have embedded small group learning opportunities such as relaxation times to unwind and talk about our day. We remind each other to take deep breaths and to share how we may feel while sitting in a circle, or gathered together in a regular meeting space.

Over the last few days educators have introduced books that identify ways to share feelings with others, how to connect with others, and strategies for us to identify specific feelings to help us regulate our thoughts and feelings.

A little special bear whose name is ‘BB’ has been introduced by one of the educators.  He was a bear donated to Robinson House and is now a part of our community. The educator shared how even adults have big feelings and can also feel overwhelmed. BB joins our circles and the children all have a turn at holding BB. They can decide if BB will sit next to them and give him a hug if they feel they need a hug; at times BB just being present with us has been enough.

Educators are noticing how BB is helping the children verbally express themselves, and how each day the children are becoming more aware of how to identify their feelings and to regulate these by seeking support from familiar people. The children also understand that at times it’s ok to need and want space to themselves. They are connecting with concepts like fairness, respect, and rights and referring to them during discussions about their reflections of their day and their need for their feelings to be validated and heard. The children are learning that at times challenges can be unfair and that we all have the right to feel safe, comforted, and to feel special being treated with respect by others. 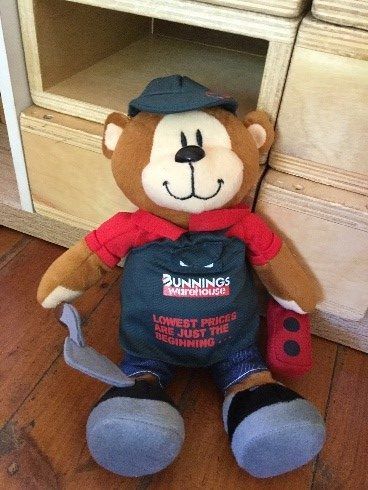 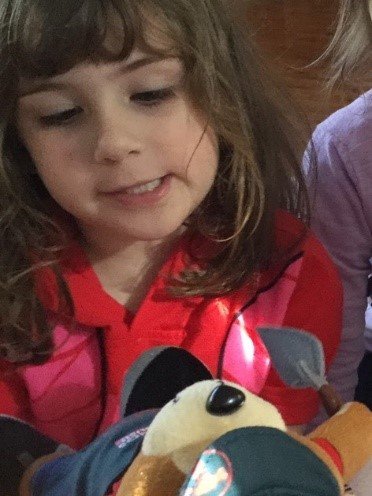 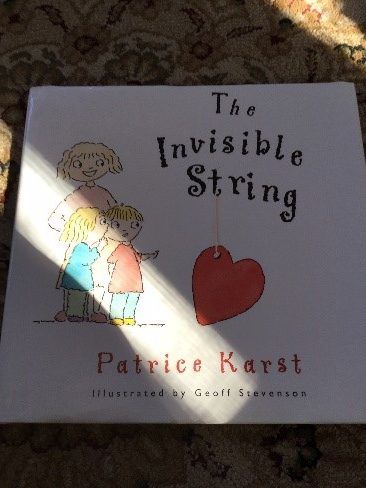 For the past month the children at Sally’s Family Day Care Sydney Wide service have been learning about hatching eggs. They have been observing chicks and ducklings hatching in an egg incubator, watching them grow and seeing ducklings take their first swim! Sally has generously shared this experience with other educators who have visited her service with their children, and she has also been bringing chicks and ducklings to playsessions at our Randwick South Sydney hub. The birds were very at home exploring the garden whilst we had group time!

Sally and Educator Support Officer Barbara also took the birds to Annabel House, which is day centre for people with dementia and it was wonderful to witness the pleasure this experience brought to the clients there. The birds have certainly proved a great connector for the local Family Day Care community and beyond. Thank you Sally! 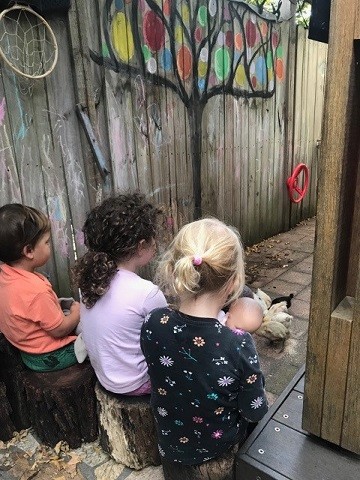 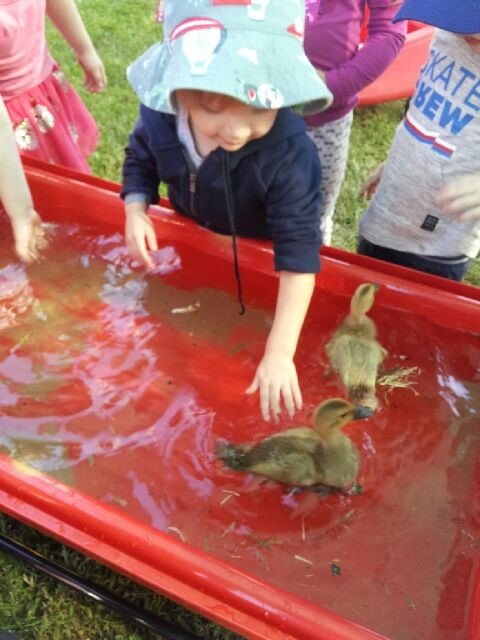 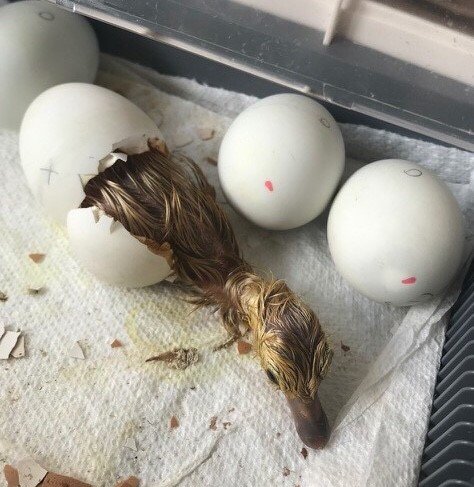 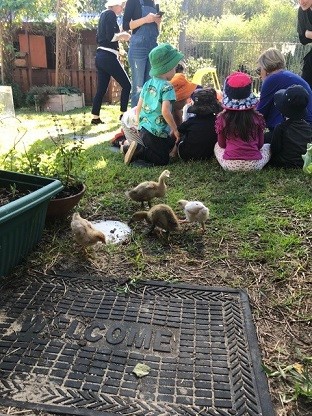