Pretending to be camping, or living in the bush and lighting campfires has often featured in the children’s play in Gorton House preschool, leading educators to recently reintroduce real campfires as part of the preschool program. Educators saw children sharing their own knowledge and experiences with both their peers and educators as they talked of campfires shared with their families, sometimes just for warmth, other times so that they could cook food on the fires while camping. These experiences and knowledge often influenced the children’s dramatic play, as they then shared and enacted their knowledge. It was inevitable that, after what seemed like hundreds of pretend fires in Gorton preschool, plans to experience a real campfire would follow. Many things were discussed, including the potential dangers of fire and how to ensure fires are always managed safely. As educators and children made plans for the very first fire, the children were clear that they needed to toast marshmallows on that first fire, so marshmallows were bought, discussions and assessments on risks were carried out and they celebrated their first fire. The carefully laid plans ensured a safe and very meaningful experience.

Since then, other fires have followed. The children have have cooked roti as well as sausages which they excitedly devoured as hotdogs straight off the campfire! With the recent cold weather, the fires have warmed everyone, and the educators and children continue to make plans for the next meal they can cook over a campfire. An unanticipated yet wonderful outcome of these campfires has been the discovery of cooled charcoal as a sensory play and art medium, with the children using charcoal both on paper, as well as on their bodies!!! 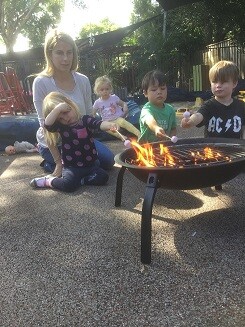 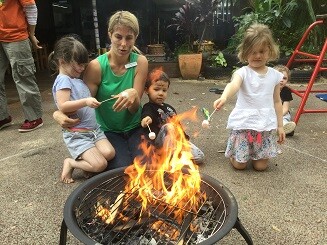 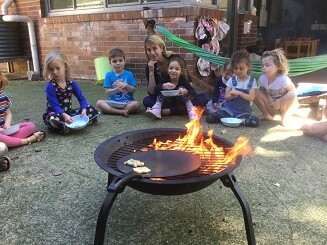 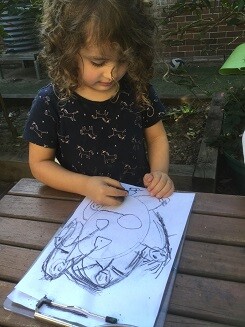 The children have been exploring the book ‘Stuck’, written by Oliver Jeffers, as part of a weekly integrated group with Educator Sabreena and Occupational Therapist, Justine.

During this group the children have been practising phonological awareness, revisiting the story each week, engaging in a weekly experience linked the book, and then finishing off the group with some mindfulness experiences.

This week the children created a tree using a cardboard roll and some paddle pop sticks. They then had to see how many of the items from the story they could balance in the tree. An activity such as this gives children opportunities to investigate, manipulate and experiment with a wide range of resources and materials that develop the concepts, skills and learning dispositions that are important for science, technology, engineering, art and mathematics (STEAM). Through STEAM children learn to ask questions, work together, think creatively, solve problems, explore, take calculated risks, test solutions and discover new ways of doing things. This group has also helped to promote children’s confidence with peers, positive social interactions and skills linked to listening, turn taking, patience and persistence. 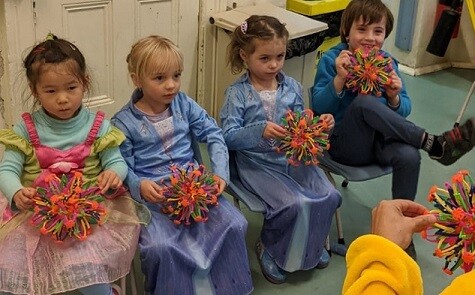 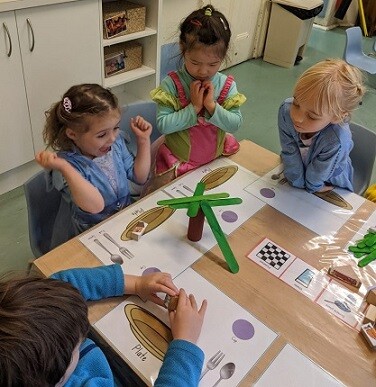 In Murray House infants the children have been showing an interest in expressing themselves through verbal and non-verbal communication. Over the past few weeks Educator Dalia has been engaging the children in reading books and singing songs about feelings. Aiming to stimulate the children’s learning, images of different emotions were added around a mirror, giving the children the opportunity to label and act out the emotions by looking at their own reflections in the mirror.

Since early March the toddlers in Murray House have been exploring healthy eating habits, and have been talking about eating a variety of foods, portion control and how often they should eat ‘every day’ foods and ‘sometimes’ food. Educator Mandy engaged the children in reading the story book ‘Eating Well’ and they then explored visual cards with a variety of foods depicted, and sorted and categorised food groups such as carbohydrates, proteins, and vegetables/fruits. They upcycled some cardboard boxes to create a sorting game in which the children sorted pictures of food into their food group category.

During meal times the children are invited by their educators to recall these discussions, and some children have also been willing to try some new foods they have previously disliked. It has been wonderful for educators to see the children exploring new textures, colours, shapes, and tastes, and expanding their palates. 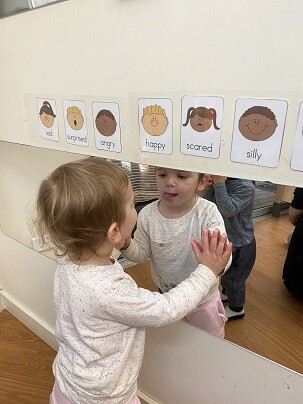 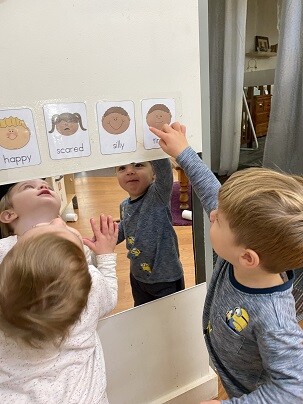 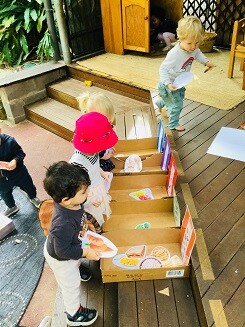 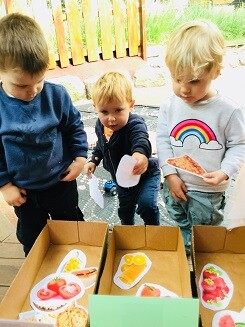 The educators and children take the opportunity every day to come together as a group to acknowledge the Wangal people who are the traditional custodians of the land they are on. This Acknowledgement of Country is enacted through a song and some actions, which is a highly effective way for young children to learn and develop their language skills and memories. Singing and talking together strengthens the educators’ and children’s relationships with each other, as they share ideas and learn about Australia’s First People. 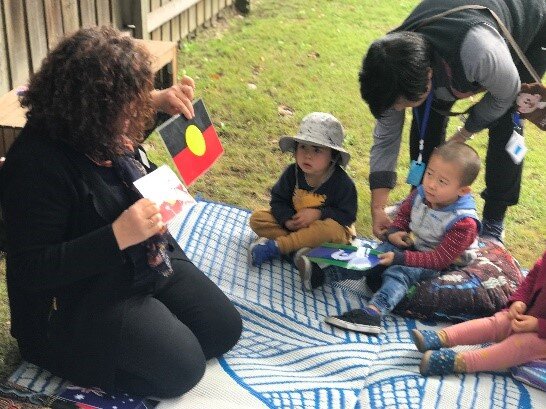 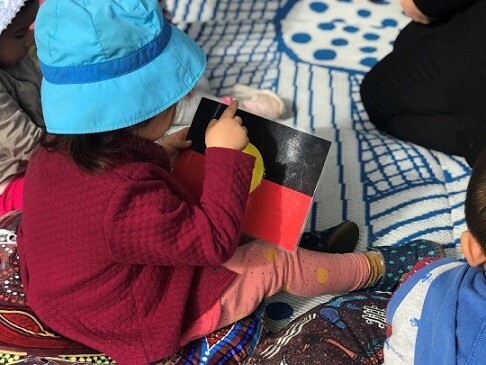 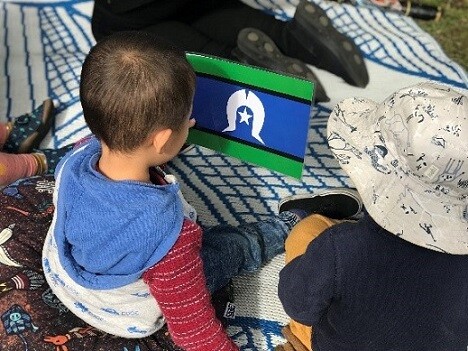 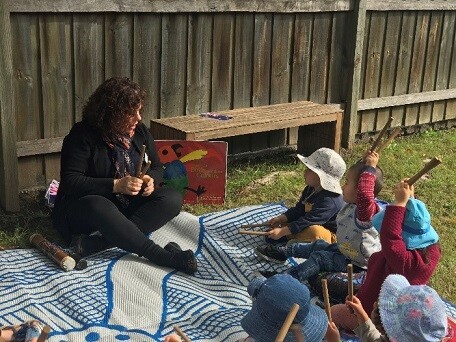 At Robinson House educators have been building children’s understanding of Aboriginal and Torres Strait Islander history and culture in the last few months through a variety of experiences including picture books, music, and language. This week they aimed to reinforce this and to particularly explore the significance of National Sorry Day and National Reconciliation Week. The children have also been learning about the seasons on Dharawal country (south of Sydney), and exploring the changing season around The Infants’ Home through photography, play, and eating Lilli pillies off their Lilli pilli tree! Other experiences have included making Aboriginal and Torres Strait Islander flags with paint and collage and taking nature walks around The Infants’ Home’s grounds.

At Robinson House the educators believe that children are knowledgeable humans who are capable of learning and thinking about big issues of history, culture and social justice. They feel lucky to live in a time when there are many wonderful story books by Aboriginal and Torres Strait Islander authors, and they have been reading and talking about ‘Stolen Girl’, ‘Sorry Day’, ‘Baby Business’ and ‘The Toast Tree’. The first two stories deal directly with the story of the Stolen Generations, while the second two celebrate Aboriginal and Torres Strait Islander families and cultures.

Robinson’ House’s philosophy and practice guides educators to put children’s wellbeing first, and they have been working hard to make sure that children feel safe and cared for when discussing scary ideas like the removal of children from their families. They have also been relating the idea of saying sorry to the children’s every day social world by encouraging them to reflect on what it means to say ‘sorry’, and discussing how they can keep each other safe and happy.

Another book they shared was ‘The Rabbits’ by Shaun Tan and John Marsden. The Rabbits implicitly tells the story about how the White people (represented by the rabbits) came to the land, and how the Indigenous people (represented by the kangaroos) reacted to this. It is essentially a narrative about colonisation, told from the perspective of the colonised. This history, described in the story as events that happened ‘many grandparents ago’, can be quite intense and dark. Some children described the illustrations as “scary” and asked questions such as “Are they using cannonballs?” and “Is that a gun?”

While this history is a deep and complex narrative, scaling it to something relevant to the children’s experiences allowed them to build their understanding. For example, educators helped the children to relate how the rabbits in the story came to the land to the children’s own experiences of when someone takes their spot without asking helped them. Another example of this was when the narrative mentioned children being stolen, and educators related this to the children’s favourite cuddle toy being taken away without anyone asking them. This was not to trivialise these concepts but to help the children gain an understanding of what happened. The last page of the story shows the kangaroo and rabbit facing each other. This page was particularly significant as it reminded the children of how they might try to resolve a conflict and what ‘sorry’ means. 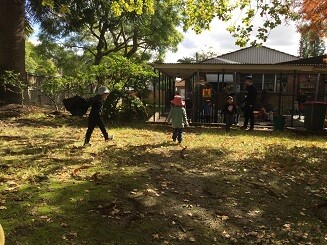 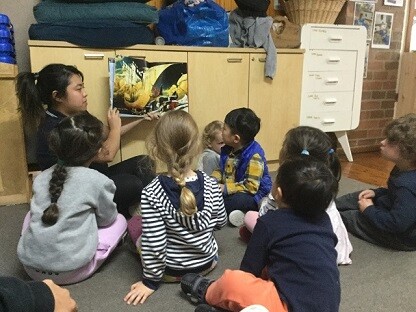