At Gorton House we have recommenced taking a small group of our preschool children on fortnightly visits to a local Bupa residential ‘aged’ care home that is designed to provide preventative care for its residents to reduce the need for hospitalisation. Research has shown that there are a number of mutual benefits from fostering relationships that span across the generations. Encouraging these intergenerational relationships gives children the opportunity to learn from and connect with older people thus enhancing and promoting the overall wellbeing of all ages. Intergenerational relationships help to break down barriers and stigmas and encourages us to appreciate and respect people of all ages. We all have our own unique skills and knowledge and we all have areas in which we can grow and learn from one another regardless of whether we’re two or ninety-two years old.

Some benefits of fostering such relationships are:

On our Bupa visit last Wednesday the children got to meet some new friends. All of the children entered the new space quite feeling shy and unsure of the new environment, and stuck close to educators Lilian and Mel. After 20 minutes however it was so lovely to a positive transformation as the children started to feel comfortable in the space and begin to slowly engage with some of the people in the courtyard area. Michelle sat with Maria and they did a colouring-in picture together. Wyclef and Heath enjoyed building towers from large Lego with two men who were both called Michael. “There are two Michael’s and my dad is Michael, too,” said Heath. Austin played a card game with Nita at the table. Isabel, Frieda, Ridhika and Annika went off to explore the courtyard and even pretended to open up an ice cream shop in Bupa. Everybody thought this was a great idea!

Later on Lilian and Isabel, Michelle, Annika, Ridhika and Austin all played ball games with Michael and Ken. Nita followed a couple of the children over to the bird aviary and introduced two of their budgies “Jill and Jack” to the children. She then explained to the children that they were their pets and they had a conversation about pets. The children sat around the table with their new friends and had cups of tea, juice, cake and biscuits which was lovely.

We hope to continue going for regular visits each fortnight with the same eight children to really encourage strong relationships. 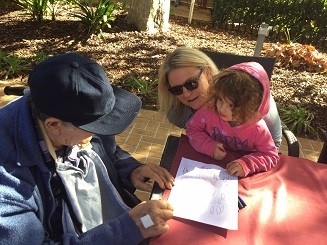 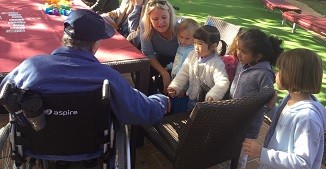 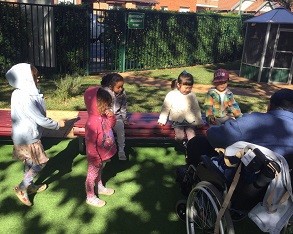 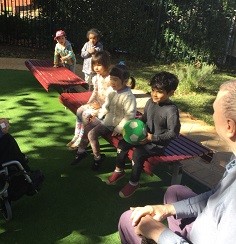 To continue to follow and extend on the children’s interest in learning about insects and the natural environment, we shared a story called ‘The Very Busy Spider’. The children had the opportunity to discuss insects and their features. We spoke about grasshoppers, beetles and flies, and insects’ wings and feelers. As we shared the story about the spider, we had the opportunity to discuss how many legs spiders have, and why they spin webs. Cathy showed the children the illustrations of the spider’s web and they could feel the texture of the web – this led to a discussion about what spider webs are made of.

Robots have recently been an area of interest for the children in Johnson House preschool. With an array of ideas and lots of imagination being shared amongst each other, the children have been working on making a communal robot. First a plan was developed and drawn that detailed what the robot would look like and what features it would have. Then, using a range of recycled materials, the children cut, glued and designed the robot to match their original plan. This project was a great opportunity for the children to work together and it helped to enhance their confidence as they shared their ideas and worked towards a common goal. The ongoing nature of such experiences and projects, which can be returned to and repeated, lend themselves to ongoing involvement, encourage deep learning and promote positive interactions amongst peers. 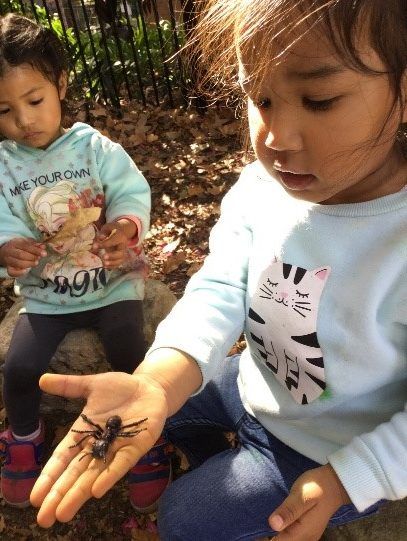 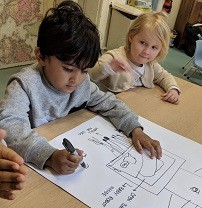 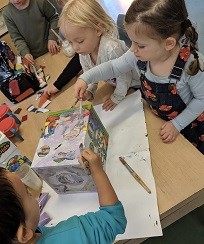 A few weeks ago the children in Murray House toddlers were involved in an upcycling project with Educator Deepa, transforming an old sail cover into a big fish. This artwork was inspired by the children’s morning routine of feeding our pet fish and their observations of the fishes’ movements in the water. Many discussions occurred about the artwork fish’s body parts and its age. Finally, it was time to give their created fish a name. When Uncle Terry arrived one morning, the children excitedly shared their intention to name the fish and they shared the story behind the art. Uncle Terry then invited the children to dance and sing a song about animals that live in the water, such as the eels and the sharks. They also revisited ‘Taba Naba’ which is a song about going fishing in the sea, sung by Torres Strait Islander people. Uncle Terry told us that in his language, long fish is called ‘Zabairr’. The children repeated the word ‘Zabairr’ and decided that it is a good name for their fish! We thank Uncle Terry for teaching us the new dances, along with the song. It is a fantastic way to practice and share non-linear learning, which is one of the Aboriginal ways of learning. 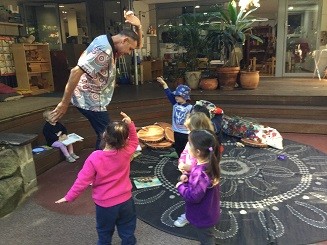 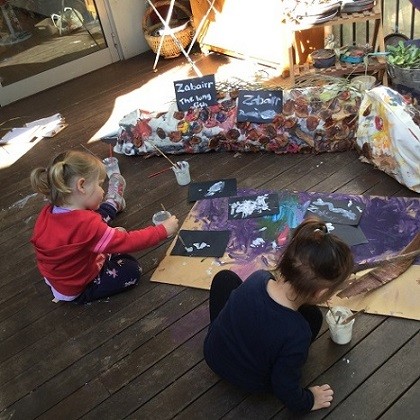 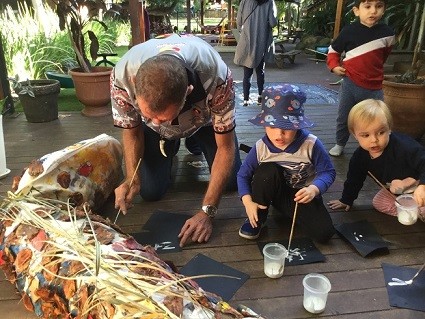 To kick of our Science, Technology, Engineering, Arts and Mathematics (STEAM!) integrated group at Robinson House, the children have been exploring patterns through a pushpin activity. Identifying, extending and describing predictable sequences is integral to children’s emerging mathematical thinking. During our Monday STEAM group children have been identifying patterns in their clothing and surroundings, as well as in images of nature and the built environment. A pushpin activity encourages children to match coloured pushpins to the same coloured squares in a grid, then repeat the given pattern in a blank grid, with our integrated services staff encouraging children to identify and verbally describe each pattern. Some children have begun to create their own patterns as well! Pushing pushpins into cork board develops the fine motor strength and accuracy that is required for pen-holding and other similar tasks. Next up our STEAM group is stepping into the wonderful world of coding! Watch this space. 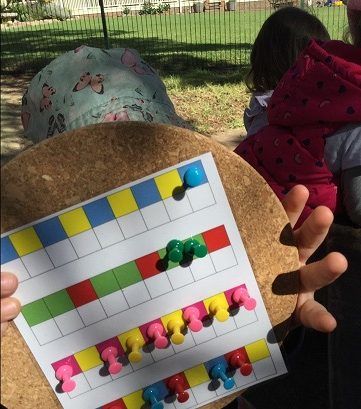 At the Family Day Care Sydney Wide Northern Beaches hub we celebrated Family Day Care Week (6-12 May) by remembering that ‘every child is a star’ at our weekly playsession. The children were engaged in an art collaboration of wrapping a star, which was made from sticks, with wool, pipe cleaners and various other materials.

Some of our educators also celebrated by making their own stars with the children and at Suzanne’s Family Day Care, the children spent a long time wrapping their star in wool. 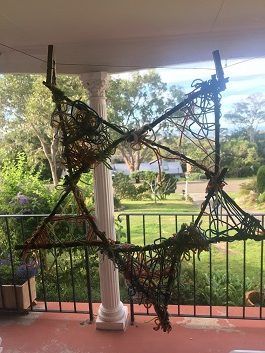 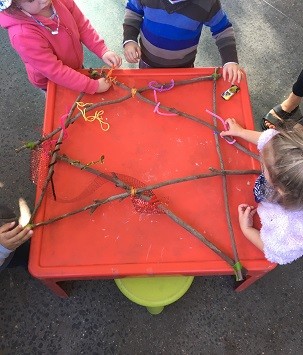 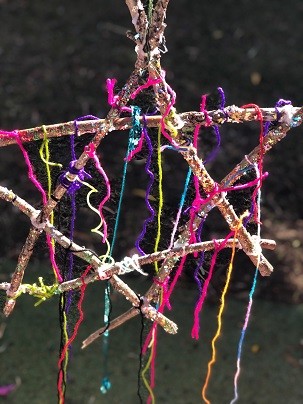