Over the past weeks, through their play, the children in Gorton House preschool have been exploring their experiences and understanding of working in, or visiting restaurants. Restaurant play has resulted in children enthusiastically discussing the various roles of people within restaurants or cafes, such as chef, waiter/server and customers. The children have negotiated roles amongst their peers and then enacted their understandings of these roles by drawing from their own personal experiences. We have seen children discussing and asking Educators for help to write menu items, as well as drawing pictures of food to make their items visible. Educators have facilitated the children’s play by taking on the roles assigned to them by the children, and they have been scaffolding further learning in various ways, including bringing into the space several take away menus representing a variety of cuisines.

Rich engagement and learning have continued to evolve. Children acting as chefs engaged in a lot of ‘cooking’, so Educators added resources such as real (although empty) spice jars, sauce containers and food tins. This enthused the children as they discussed in greater detail the various ingredients such as soy sauce, chilli, pepper, curry, paprika and oregano. The children could also smell some of the spice residues, which were deliberately left as a way of further stimulating their senses and discussion. The addition of these spices led to children being keen to smell, discuss and compare ingredients.

This week we provided children with the opportunity to taste an array of herbs and spices found in many kitchens, and the children shared their own experiences of foods they associated with these tastes, with comments such as, “this tastes like gingerbread” when the children tasted ground ginger, or “this tastes like lollipop” as they tried a little bit of sugar. We explored the combining of tastes, such as a little bit of cinnamon on apple. The children enjoyed this taste so much that it was decided to bake our own little apple pies (which ended up being pear and apple pies because the children explained they also love pears) the very next day!

We are planning a range of cooking experiences, using varied spices, herbs and other ingredients over the coming weeks. We know that actively engaging children in opportunities to handle and explore food ingredients can give them a sense of agency and empowerment, as well as the confidence to try new foods and flavours. We can also celebrate how delicious nutritious food is, and further foster a sense of enthusiasm over wholesome food.

Some recipe books have been added to the space as well as loose items, such as lengths of wool and shredded paper, that can resemble a range of ingredients as children explore recipes and cooking, providing children with the opportunity to engage with the cooking process through play. We have also loved the children’s creativity; one child needed eggs, so he scrunched up paper into an egg shape, thus completing his recipe. Another child needed grated cheese, so they carefully tore little shreds of paper which they then sprinkled onto their vegetable dish.

Our children’s ideas and enthusiasm drive us, so we are quite sure that there will be quite a lot of cooking, both real and pretend, occurring within the preschool room over the coming weeks.

Food hygiene and safety are always reinforced whilst engaging in food prep and eating, and the children have been supported to participate in these experiences in ways that minimise any risks to health, especially at times like we are currently experiencing with Covid-19. 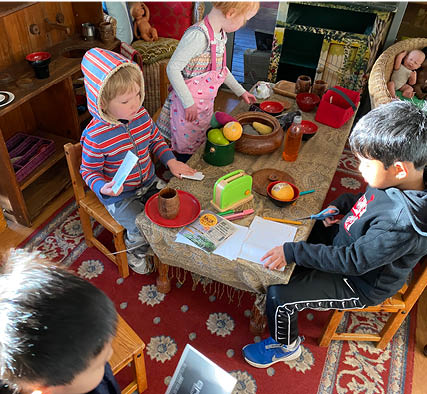 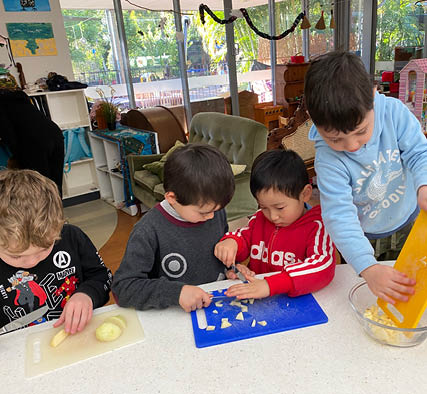 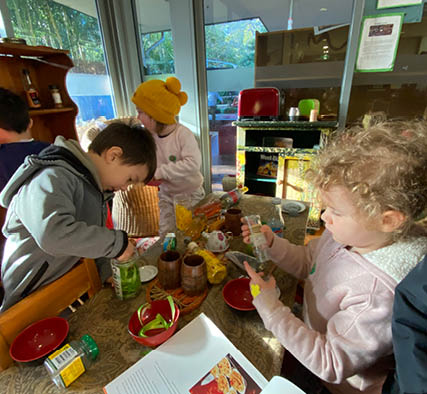 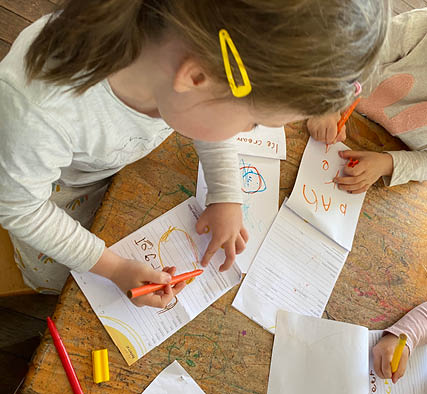 Following discussions with the children in Johnson House about fruits such as lemons and oranges, we explored what the children often call the “little oranges” (calamansi fruit) that grow in our garden. We picked some ripe calamansi fruit, and I shared with the children how the calamansi plant is native to my home country and to other parts of Southeast Asia, and that we use it to make juice and seasoning. We examined the fruit’s attributes, such as the shape, colour, parts inside and smell, and we continued our discussion on why this fruit looks like “small oranges.” The children loved the sweet smell of the calamansi fruit. When we cut a fruit in half, the children saw that it had some segments, pulp, and seeds, similar to an orange. The children helped squeeze the juice out, which we then diluted in water to drink. Most of the children loved the taste, which they described as being “sour but sweet.”

Our conversations lead us to discuss how we only pick fruits when they are in season, such as our ripe calamansis, and how when something is not ripe, we need to leave it to grow. We connected this to the theme of this year’s NAIDOC Week, which was ‘Heal Country’. We discussed how the First Nations people cared for country, and how we can also look after our environment. Because Aboriginal and Torres Strait Islander people lived in harmony with the land, they took only what they needed. We can also show our respect for the land by taking only some fruit from our garden and leaving the rest for others and leaving the plants in the garden to grow, while also continuing to look after living things such as our worms and the fish at Johnson House. 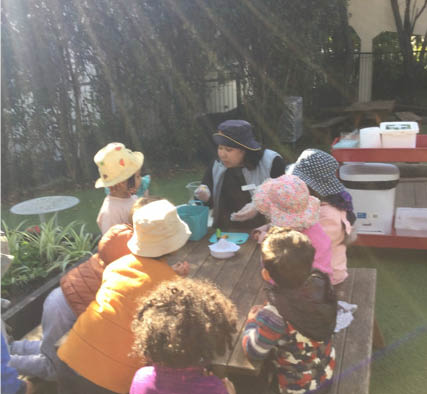 During group time the children in Murray House toddlers have been reading the storybook ‘Belinda’, by Pamela Allen, which is about a cow who did not want to be milked by Old Tom. This story led to discussions about the foods we can make from milk, such as butter, ice cream, yoghurt and cheese.

To explore this further the children made their own butter. The children were excited and fascinated to see how cream can change to butter when it is shaken up—it was as simple as that, shake, shake, shake, until the cream turned into solid butter. After that we all enjoyed sampling the freshly made butter with rice crackers. Through this experience the children also learned scientific concepts about how liquid can be changed to a solid form. 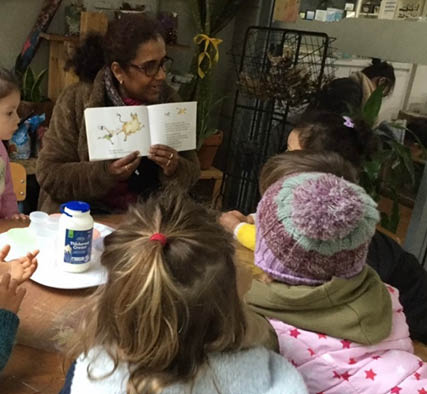 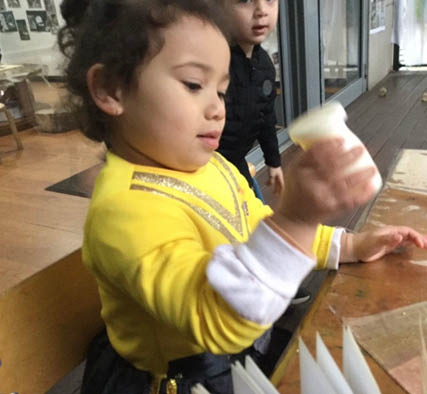 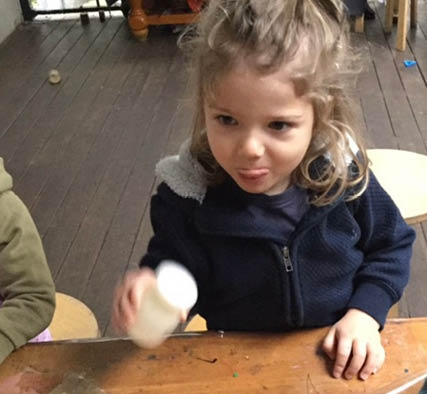 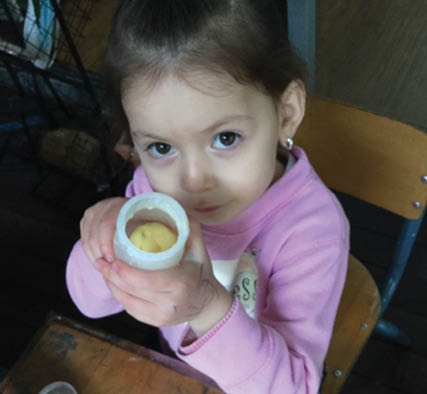 Through these experiences the children are learning to recognise the flags of our First Peoples. They are also developing an understanding of the symbolic meanings of the colours that make up the Aboriginal and Torres Strait Islander Flags. 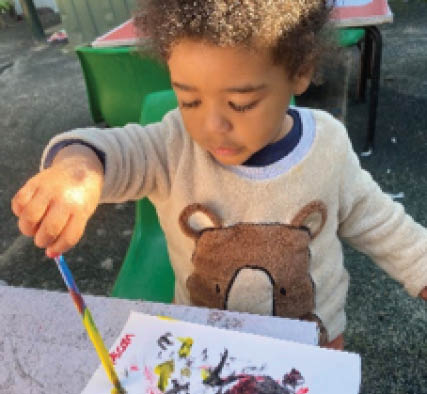 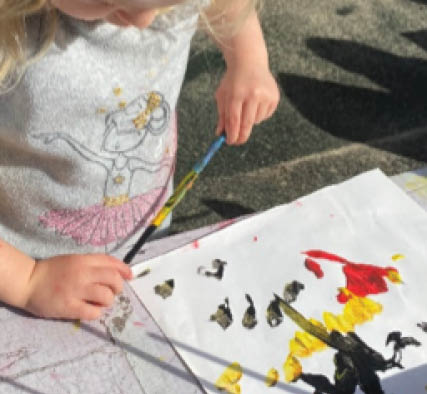 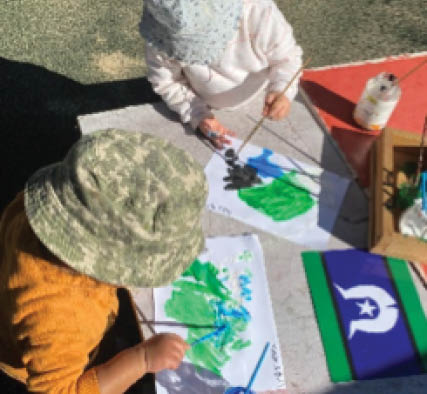 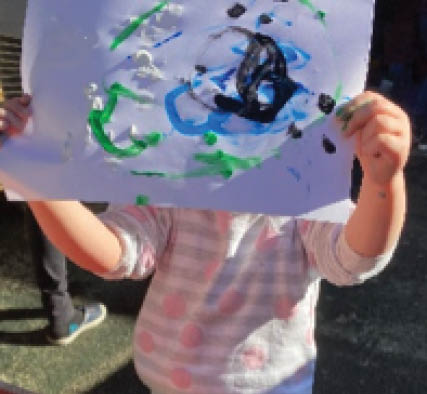