This Week at The Infants’ Home 13 September – 17 September

The children in Gorton House preschool room were very excited to receive an invitation from our kitchen chef Charoen to help in harvesting some of the vegetables growing in our kitchen garden. While Charoen was busy in the kitchen preparing our lunch, he asked if we could harvest the lettuce, sugar snap peas and snow peas that were now plump, crisp and ready for picking.

We headed out onto the lawn and we were quite excited about doing this very special job, with the children just as eager to taste some of the vegetables as to pick them. Within moments the children had found the peas and they began to carefully pick these off the vines. We began to add these to the trays Charoen had given us and we watched the number of these grow!!! The children were also quite astute at noticing the differences in these peas. Some were flat, while others were plump, and we discussed the different types of peas, with some children being familiar with one type, and some more familiar with the other.

Next were the lettuce leaves. We learnt to hold the stems of the plants gently while carefully pulling off the larger leaves. The children’s eagerness to try the veggies grew, so we gathered around, discussing trying some of these super-fresh veggies, while making sure we passed on the majority to Charoen so that all our peers across The Infants’ Home could also enjoy the harvest. Every single child enjoyed tasting the veggies, with most wanting more and more!!! Even the children who often find trying some green vegetables challenging eagerly tried (and mostly liked) them.

We also noticed the many other plants growing in our garden, and we tasted some of the mint and parsley. We also saw huge bushes of with lots of foliage and we approached these curiously – what were those little buds growing between each huge leaf? I thought they looked like little baby Brussels Sprouts and on mentioning this, some of the children piped up saying “I love Brussels Sprouts”, while other children said they had never tried these before. Brussels Sprouts are one of my favourite veggies and we are now eagerly waiting for these to grow and to have the opportunity to try these at The Infants’ Home.

Needless to say, Charoen and Lisa in the kitchen were most impressed with the delivery of the freshly harvested veggies and we are looking forward to seeing these in the meals being served by our beautiful, kind and very talented chefs! 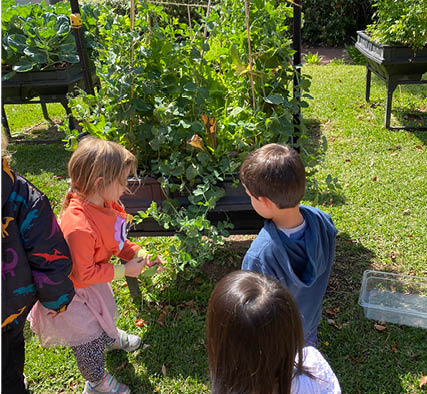 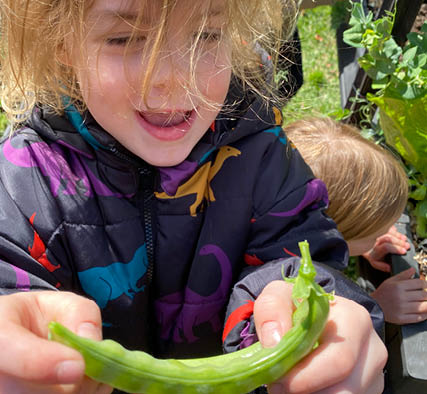 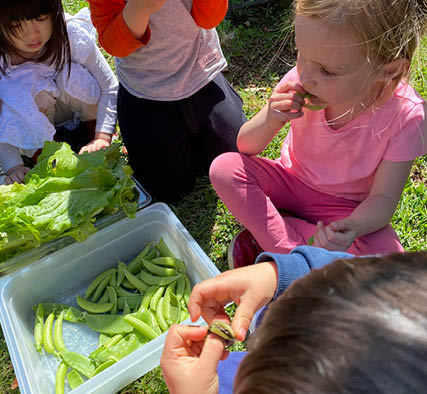 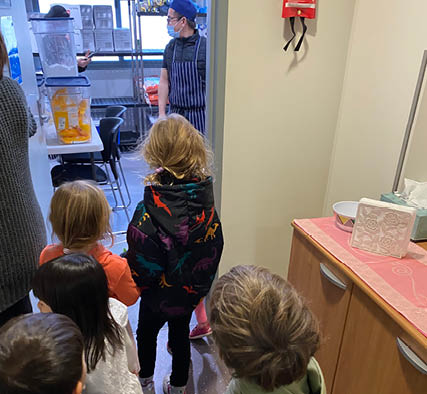 In Johnson House the children have been enjoying reading ‘Wombat Stew’ to get inspiration for our mud kitchen play. While reading the story, the children made interesting observations about the adjectives used to describe the stew, such as “gooey”, “crunchy” and “chewy”. For example, one of the children commented on how adding bugs to the soup would make it crunchy, but also chewy if slugs were added!

Once the story was finished the children were invited to go for a short walk to the lavender and rosemary bushes that grow next to our veranda to collect things they thought might be good to have if we were to make our own ‘wombat stew’. The children collected lots of lavender flowers, rosemary, interesting weeds they found nearby, dandelions and some ferns, and then we headed back to our mud kitchen and started cooking!

The children enjoyed the smell of the lavender and rosemary flowers in their stews, while some children made a salad by tossing all of the herbs and plants collected in a bowl, and adding just a bit of water as a “dressing”. This prompted discussions about the lavender and rosemary that some of the children have growing in their gardens at home. It was a lovely sensory experience for the children to connect with nature and their land, while having lots of fun. We look forward to continuing to explore our new mud kitchen further in coming weeks. 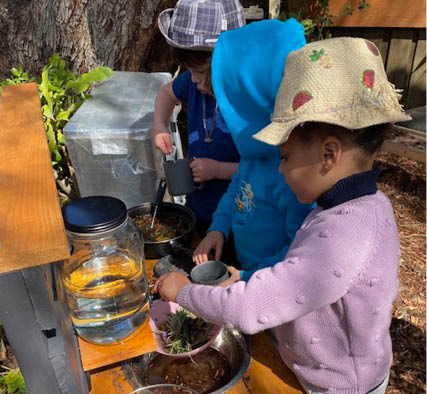 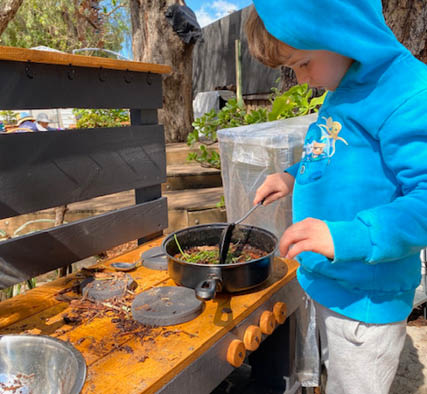 The children in Robinson House were showing a lot of interest in storytelling using the overhead projector, and we revisited this one afternoon this week. Everyone came together and got some chairs, and there was complete silence before the start as the children were all ready to listen to the story—it was like a cinema! The story I shared to demonstrate was “Rapunzel” (with a twist adding variation to it), but sticking to the story’s sequence of events.

The children were excited to have a turn, and found that it is definitely challenging to draw and tell a story at the same time. It was a great opportunity for the children to listen to each other, develop their confidence in communicating in large groups, as well as to recall, retell and narrate a story following a logical sequence of events. The photos show some of the stories the children told. 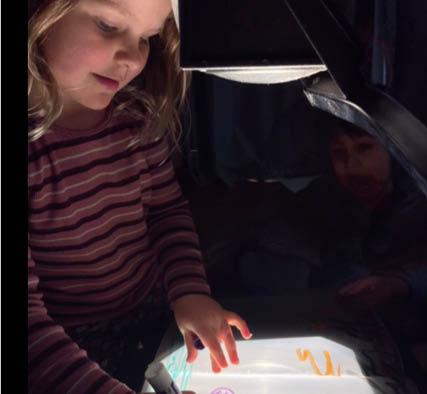 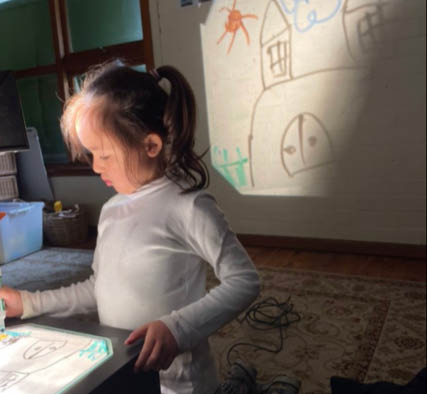 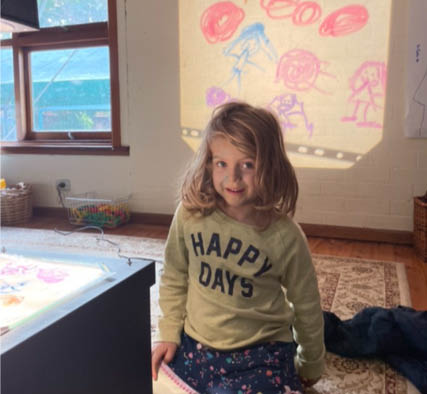 A whole week of programming was inspired by this week’s Learning Library from Educational Leader and Family Day Care Manager Janice Francis.

The children at Ebony’s Precious Possum Family Day Care service in Phillip Bay enjoyed hands-on activities to help them understand how important bees are in our environment. They listened to stories including ‘Bee and Me’, engaged in loose parts play, made their very own honeycombs and cardboard bees, and buzzed about the garden with a new joy of stopping, listening and looking in their beautiful outdoor play space. 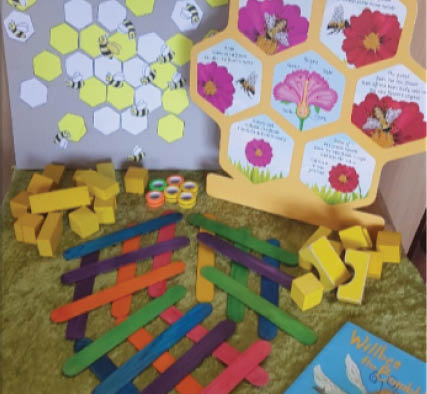 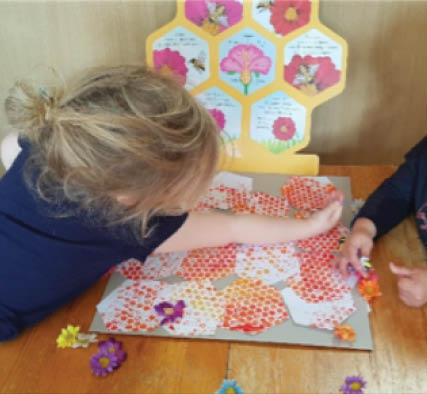 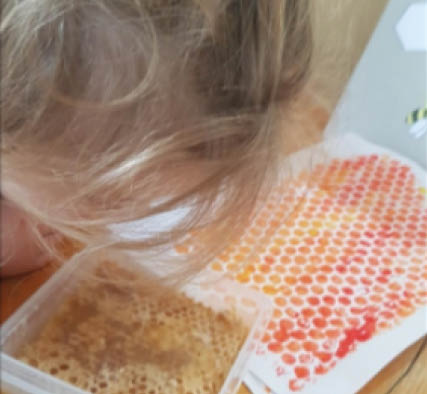 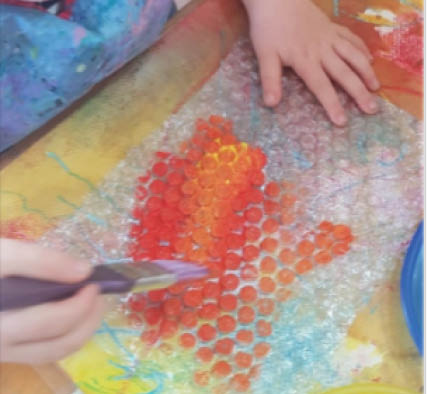