Recently the children have been interested in exploring Australian animals, and their features and habitats. The children have been engaged in this play at the Australian animal space we have set up in the indoor environment. To extend the children’s knowledge of Australian animals, this week we shared a big book called ‘Possum Magic’, by Mem Fox. This picture book is a wonderful provocation for the children to participate in a group discussion about animals as the illustrations are large and detailed. The children were able to observe the features of the possum, koala and echidna in the story. As we were reading the story, the children were able to feel and see the pretend animals we have in Johnson House toddlers and match them to the illustrations in the picture book as we read.

The children in Johnson House have been busy ‘baking’ in the playdough space. Cupcake moulds, rollers and cutters have been explored as the children have used their imaginations to be creative. The images that have been placed on the table have also helped to promote conversations about preferred foods, methods of cooking, and discussions about healthy and not so healthy foods. Playdough is an area of interest for many of the children and providing a range of provisions in this area encourages imagination and creative thinking. It also helps the children to use play as a means to explore ideas, work together and to link it to everyday learning experiences. Playdough is also an effective tool for further developing children’s fine motor skills and strengthening the muscles in their hands, both of which are a strong foundation for the development pre-writing skills. 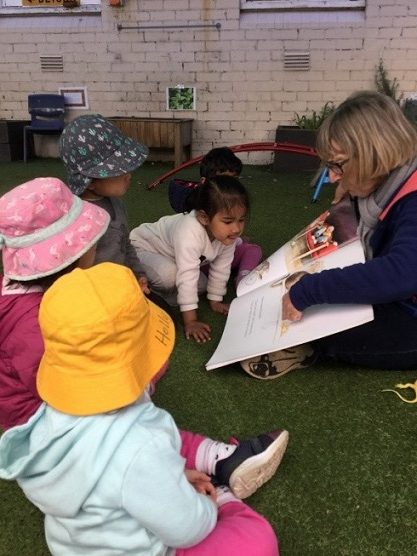 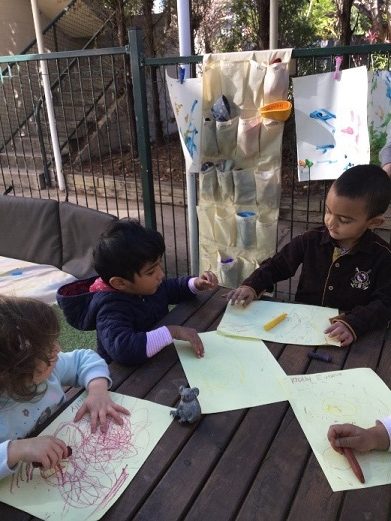 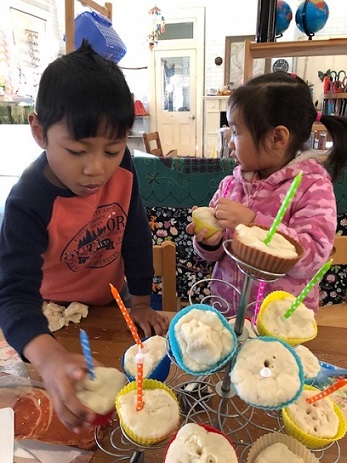 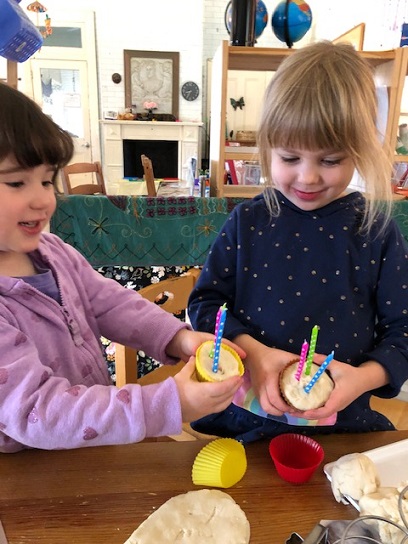 The children in Murray House have been observed exploring musical experiences using blocks, tins, bowls and other open-ended resources in the room. To respond to children’s interest, educator Yi decided to take a group of children for a walk outside Murray House to search for more material to include in the music. The children were excited and curious about the things they could see, touch and hear, and they continued to question the Yi about what they had discovered. A child asked “What’s this?” pointing at the twigs in the bush, and another yelled “ball flower!” when looking at a dandelion which had gone to seed. This experience allowed the children to connect closely with the surrounding world and the community while finding their unique musical instrument, and hence creating music with found objects become more meaningful to our children. ​

This week one of the children discovered a huge stick insect in Murray House. As it was about 15cm long, it was a great learning opportunity for the children to observe its movement. We kept it in a tank with some sticks and planned to go for a walk around The Infants’ Home to collect some gum tree leaves for the stick insect.

When educator Anne brought the tank out so the children could check on their new friend, they gathered around, but seemed a little confused as to why she had brought in a tank of sticks. Anne asked the children, “What have I got in my tank? What do you see in my tank?” Some of them responded excitedly, “Sticks!” Just as they were looking at the tank, the stick insect moved, and she said, “Oh! Did one of the sticks just move?” They exchanged glances at each other, and one of the children said, “I think it’s called a stick insect.” Anne acknowledged that yes, it was a stick insect. \

Anne took the stick insect out of the tank and placed it on the lid. They all stared intently at the insect, squealing in excitement as it moved towards them. The children commented enthusiastically, “It’s crawling! It’s crawling! It’s crawling up!” They continued to observe the movements of the insect, and some were asking if they could touch it. Some of them took turns to give it a gentle touch. We engaged in some discussion, such as deciding on a name for the stick insect, and suggesting we go for a little walk later to pick up some leaves for it. One of the children suggested that we call it, “Shum Shum!” which everyone seemed to agree with as they all waved at the stick insect and said, “Hello Shum Shum!”

To further encourage the children to investigate and observe, the insect and a stick were placed on the lid, and they were asked, “Which do you think is the stick and which is stick insect? They look very similar…” The children stared at the two objects for a few seconds, and one commented, “This one is moving, and the other one is not.” Another child added, “So this one is stick and this one is the stick insect.” Together, the children made an observation, and a reasonable conclusion based on this observation. 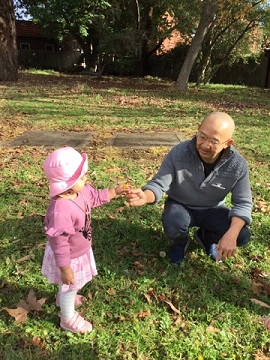 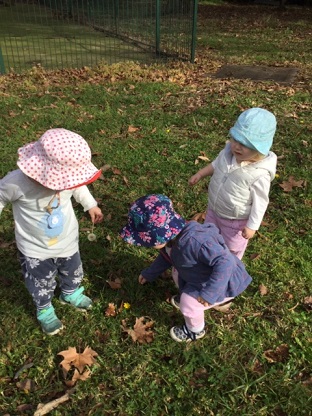 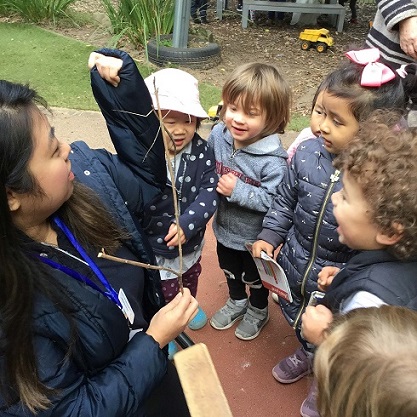 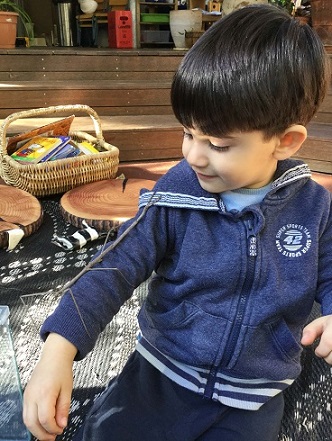 The educators at Rigby House regularly share Aboriginal Dreamtime stories with the children. Recently, the ‘Rainbow Snake’ story has become a favourite with the children—they like to talk about the Rainbow Snake, and discuss its many colours and what it looks like. The educators have extended this interest by offering the children art experiences through which they can express their ideas of the Rainbow Snake. After listening to the Rainbow Snake story, the children painted their own Rainbow Snake. They were able to paint carefully and with purpose, painting long lines in many colours. Many children even added circles and dots to represent the snake’s head and eyes, showing their attention to detail, and ability to represent their ideas. The Rigby House children have also been enjoying simple ‘yarn wrapping’ experiences to create their Rainbow Snake. After collecting sticks from our garden, the wrap coloured yarn around them, to ‘make’ the snake’s rainbow skin. It has been lovely to watch the children show great ability to concentrate and focus on this challenging fine motor task, and to take enjoyment from their creations. 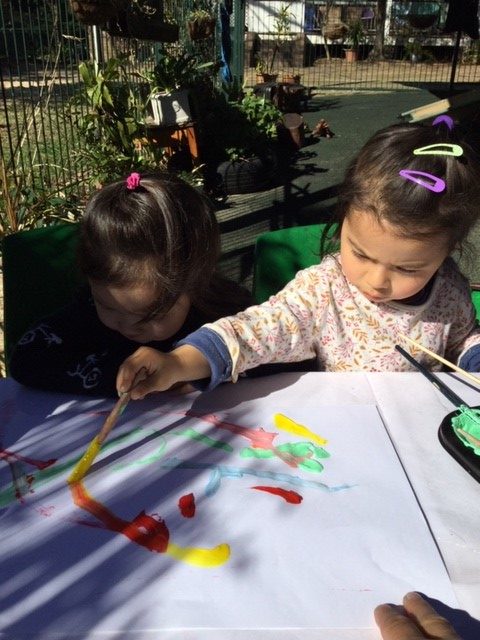 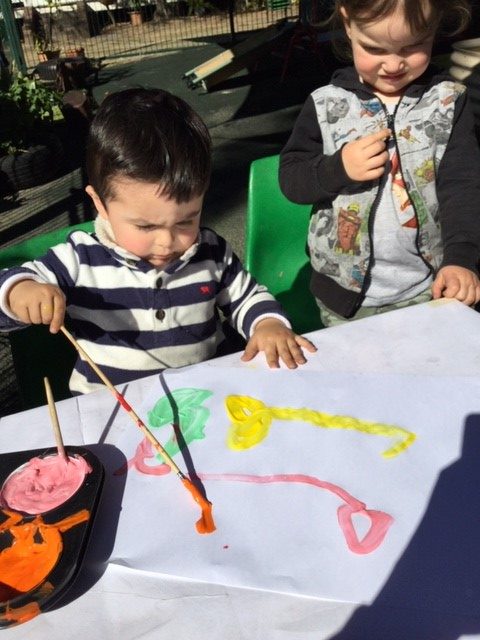 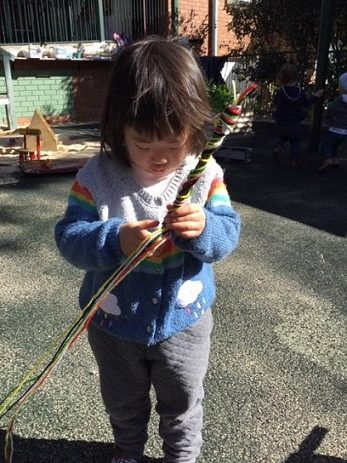 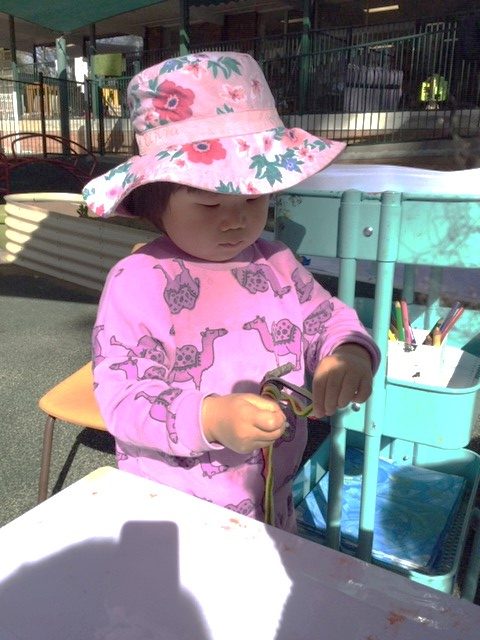 The glorious sunshine this week has enticed us out into the beautiful grounds of The Infants’ Home, which stands on Gadigal and Wangal land. Armed with clipboards and lead pencils, the children have been closely observing their surroundings and choosing things to sketch. We have had discussions about how many wings bees have, what plants are called, and whether things are edible. A surprise discovery of a cigarette packet near Johnson House led some children to compare the picture of a rotting lung to a sick leaf covered in a black fungus. Perhaps these children were connecting the health of humans with the health of other living beings! These sketching walks have also enticed children to veer away from their usual subject matter of family members and superheroes, and to try to work expressively while using only a lead pencil. Sketching the built and natural environments of The Infants’ Home has helped us to make connections between our daily Acknowledgement of Country, and our lives and experiences at daycare and in Ashfield. 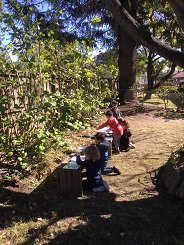 One of the unique benefits of Family Day Care is its flexibility in terms of the different types of services it can provide for families. One of our Inner West hub Educators, Bianca, provides a door-to-door service for all families five days per week. This involves Bianca using her seven seater vehicle to pick children up from their homes, complete with their day bags; have the parents sign them in to Harmony using her mobile phone; then bringing them back to her service for a fun-packed, full day! Bianca repeats the process for drop off at the end of the day, and is always mindful of the safety requirements she needs to comply with.

Bianca extends this valuable service to before and after school aged children, who are old enough to negotiate the drop off and pick up zones at their schools.

This type of community service is obviously a huge hit for Bianca’s families, who might not ordinarily be able to access her service because of travel logistics. Bianca has noted that it has resulted in less stress for the children and their families, as each day there are set times for pick up and drop off. This is another great example of the flexible nature of Family Day Care, and how it can provide experiences and services that reflect the diverse needs of the community. 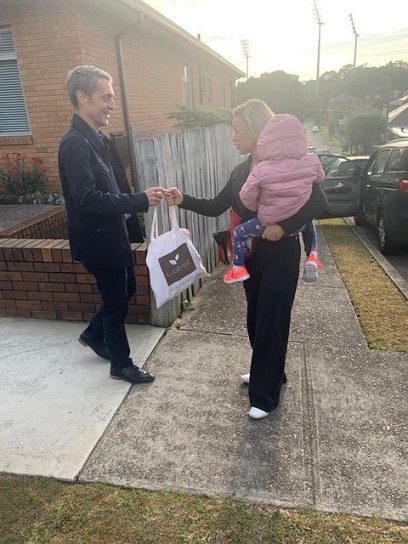 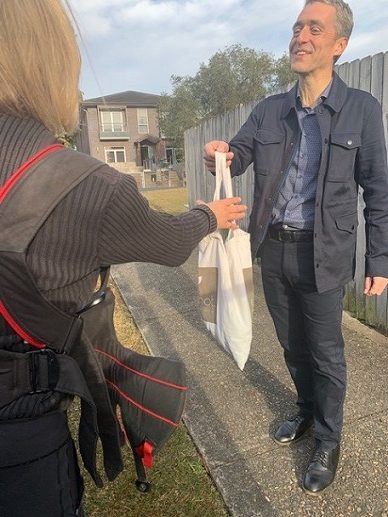 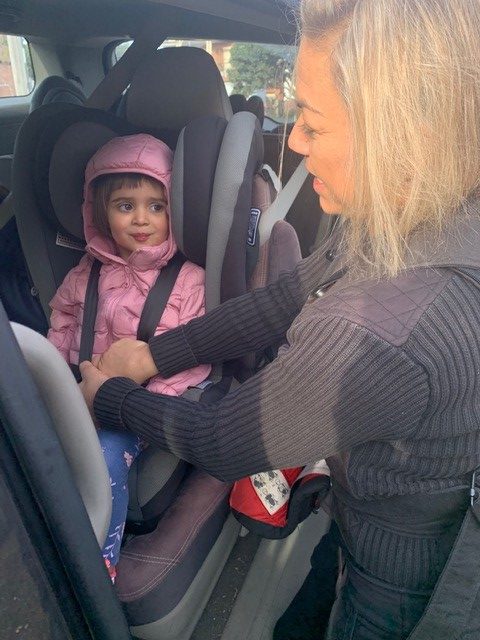 This week our playgroups were back after a two week break. At the Wangal playgroup at Ashfield Public School the children were creative at the craft table. Painting, and sand and dough play were also enjoyed. To enhance children’s gross motor skills an obstacle course was set that saw them stepping and balancing on stepping stones, and jumping and running, all of which encouraged them to use the large muscles in their bodies. 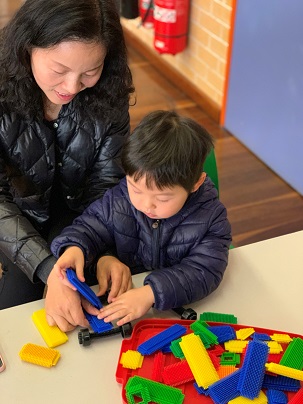 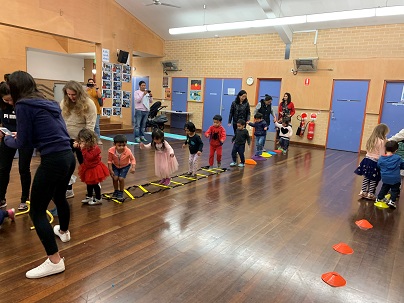 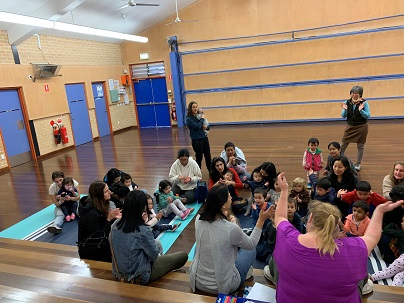 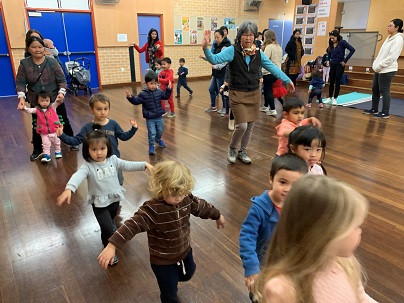