This Week at The Infants’ Home 30 November to 4 December

During the Johnson House integrated group, facilitated by our educators Sabreena and Alisa and our occupational therapist, Justine, the children have been exploring the book Gary, written by Leila Rudge. They have engaged in a range of experiences associated with the story. Over the past few weeks they have been doing drawings from the story in the same sequential order as the story’s narrative. Guided drawings are a great way for children to feel empowered to accomplish the tasks set for them. Guided drawings also provide children with lots of practice in following directions and paying attention to detail. As their confidence levels grow, they can begin to use what they’ve learned to create artworks of their own, rather than feeling overwhelmed by the instruction of “Draw something”.

The children have also been taking turns role playing as the ‘teacher’ during this time. They chose letters and asked their peers to identify the letter and the corresponding sound. Supporting children to contribute helps them to feel competent and responsible. Independence contributes to the development of self-esteem, identity and wellbeing. Also, when retelling the story, the team have been using the language “First/Then/Next/Last”. Sequencing is the skill that we use when we break down an event into simple steps and put those steps in order.

This integrated group has helped the children to develop many skills, and has been a great way to help prepare the children as they head off to school. 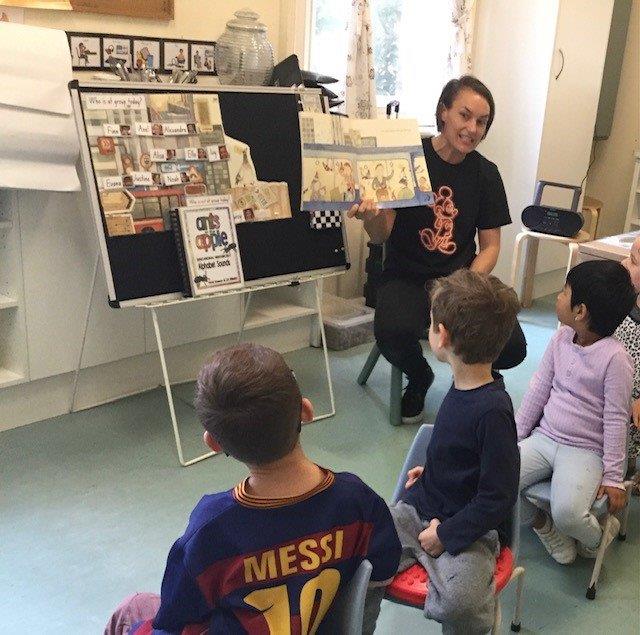 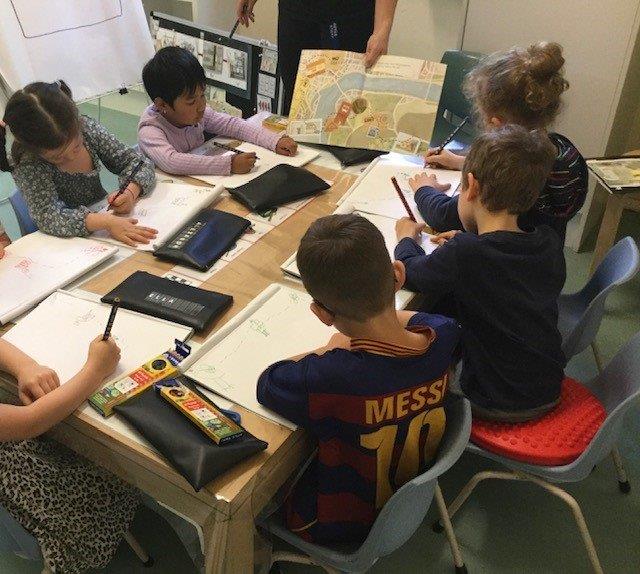 The educators in Murray House toddlers’ room have implemented regular structured group times to further build their connections with the children and to help promote the development of the children’s learning dispositions in terms of concentration, reflexive thinking and imagination. These group times also aid in activity transitions, and build the children’s expectations for the day in terms of what experiences are planned and what play areas they can engage in during the day.

These structured group times usually consist of an initial ‘hello’ themed song to check in with the participants, which is then followed by a song that acknowledges the traditional custodians of the land. Then the educators engage the children in an experience of their choice, including singing nursery rhymes, reading storybooks, playing with some chosen resources or making music together. 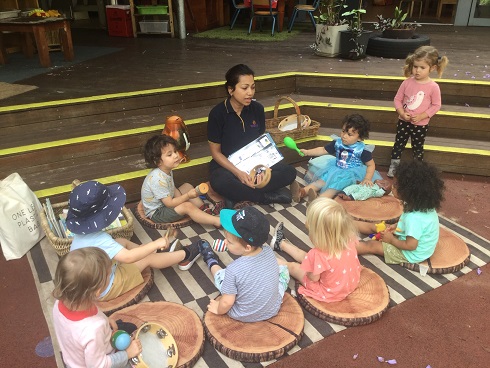 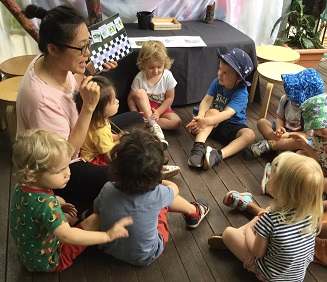 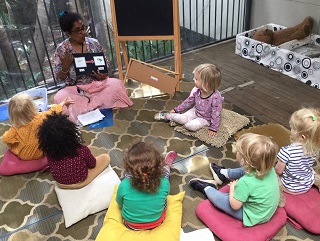 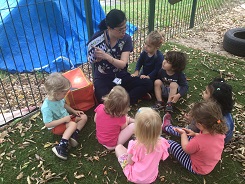 In Rigby House even our youngest children can learn about the concepts of reusing and recycling, which are both important aspects of sustainability.

Our wonderful families are bringing in items that we can reuse in the program. The children are always very proud to bring these items in from home and to place them in our collection box in Rigby House.

There was laughter and squeals of delight as the children watered the garden with the milk bottles they had helped to repurpose. 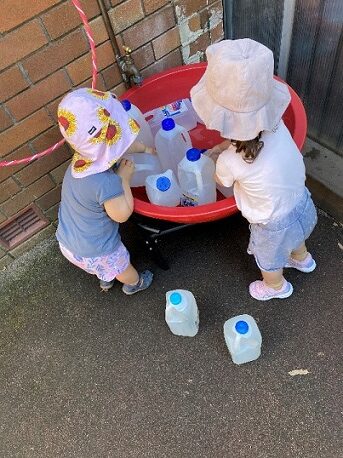 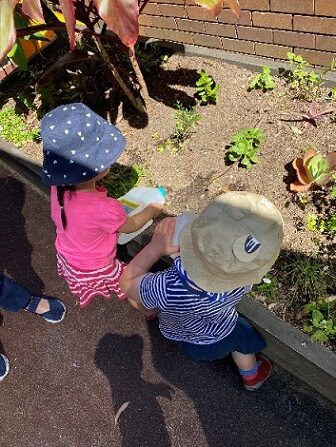 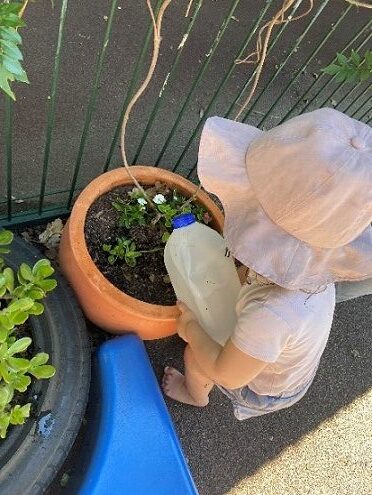 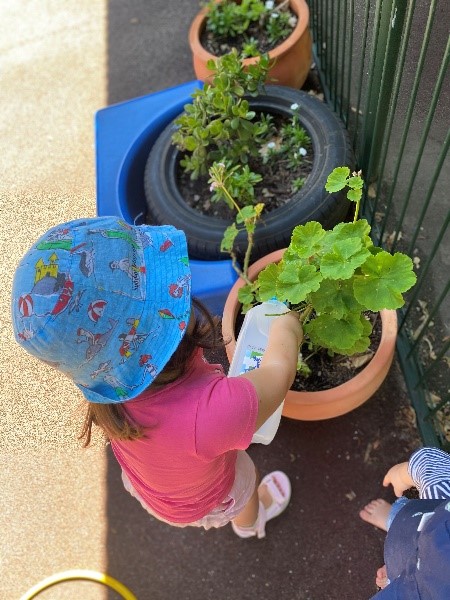 The children at Robinson House have shown an interest in storytelling and love listening to stories. To extend this interest further, educator Katie decided to set up a selection of different felt board stories for the children to explore and extend their imaginations and language skills.

The children were extremely excited as they explored the felt pieces and they began using their imaginations to create and tell stories of their own. Some of the children chose to do this independently, while others worked together to create collaborative stories. As there were a variety of themes to choose from, such as ‘camping’, ‘under the sea’  and so much more, the children were able to use their imaginations as they narrated their stories, and they moved the felt pieces to place them in a sequenced order to tell their story. The children’s understanding of what happened ‘first’, ‘next’, ‘then’ and ‘last’ was evident as they retold their stories and worked on sorting and moving pieces accordingly.

This experience encouraged the children to not only create their own stories, but to also share imaginative and real stories, such as recalling experiences they have enjoyed with their families like camping, visiting the farm and more.

With the children engaged for long periods of time, Katie observed how the children’s conversations supported the development of their individual language skills and their self-confidence as they shared stories with enthusiasm, wonder and excitement. 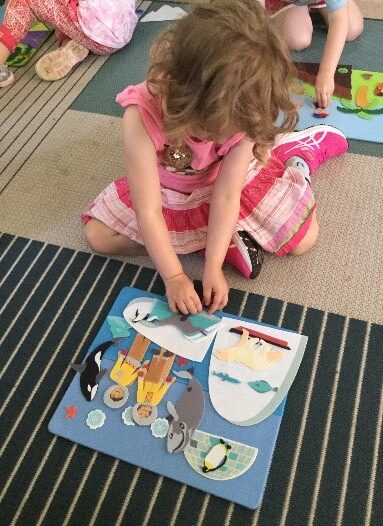 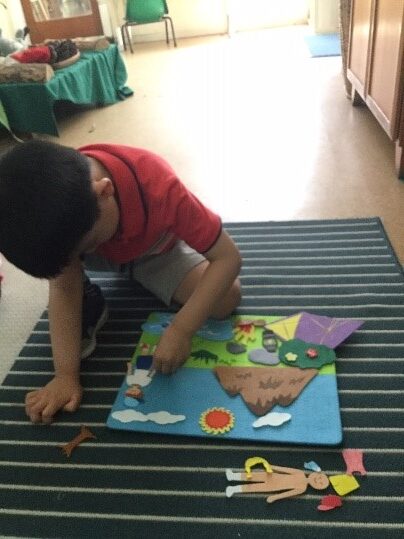 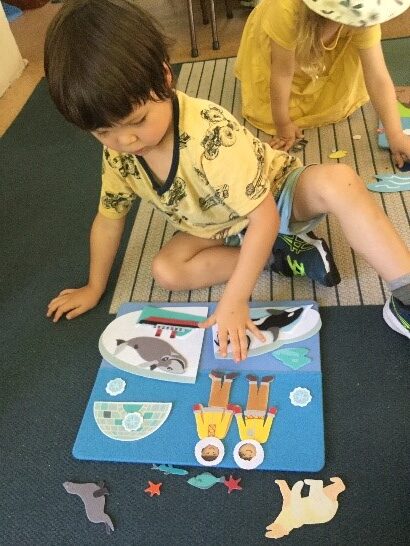