This Week at The Infants’ Home 3 August to 7 August

The children in Gorton House preschool have a friend called Kutukulung. Kutukulung (the Darug name for long necked turtle), is actually a turtle that lives in the preschool, but travels home with children to share their adventures. Kutukulung has been with the children in Gorton House preschool since January, and has already visited many children’s homes over the past months (although this was interrupted for a while, because even Kutukulung spent some time in self-isolation when taking precautions against COVID-19). Kutukulung is indigenous to Wangal and Gadigal land; eastern long necked turtles were in abundance in the many wetlands that made up local areas all the way up and down the eastern coast.

Kutukulung has a special job. Kutukulung has been trying to help the children in Gorton House preschool bring the area’s first language, Darug, back to the land on which it once flourished. Kutukulung travels with a special book that children and families read together, learning a little bit about our history and the local language. Children and families then contribute to the book, adding photos and writing stories about the adventures shared with Kutukulung during their time together. At the end of each visit, children, educators and families eagerly gather around the book and revisit all the adventures Kutukulung has shared with children out in the wider community, from shopping trips to visiting family. One family even took Kutukulung to the zoo, hoping to see other turtles, whilst another went to their local wetlands in the hope Kutukulung could visit the other long necked turtles they had spotted there in the past.

Between trips out of preschool, Kutukulung lives in a section of the preschool room made especially by the children as a space that acknowledges, reflects, holds and shares the many Darug words they are learning, and which also houses a very special book that helps drive their learning. The book is called Cooee Mittigar (meaning “come here friend”) and is written by Darug women Jasmine Seymour and Leanna Mulgo Watson. This book has helped the children learn so much about the Darug language and has become a definite favourite of many of them. They are all definitely still learning, as learning a new language can be very difficult, but many of the children are showing such commitment….. They will keep you posted, but for now, they say “Yanu” (goodbye). 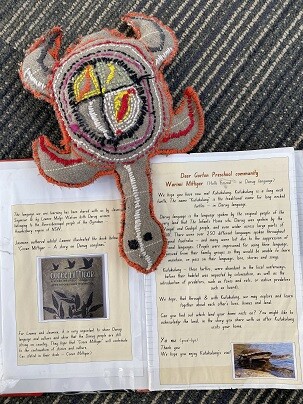 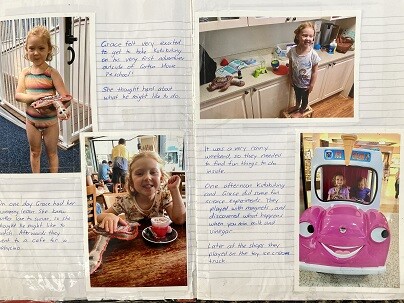 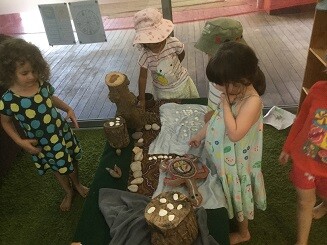 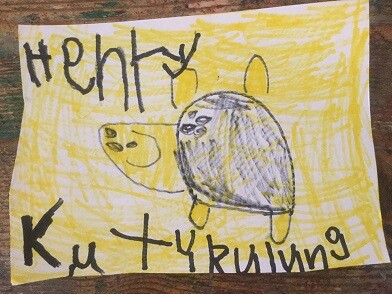 The opportunity to construct and create is always of interest to many children in Johnson House. Metal trays and magnetic tile provisions have recently been added to the outside environment. Just like indoors, providing small learning areas in the bigger outdoor environment helps encourage the children to successfully engage in spaces which have a balance between open-ended play and play that has a specific purpose or focus. The addition of this experience promoted conversations about mathematical concepts such as shape, size, pattern and dimensions, and gave children the opportunity to compare and contrast two and three dimensional shapes. 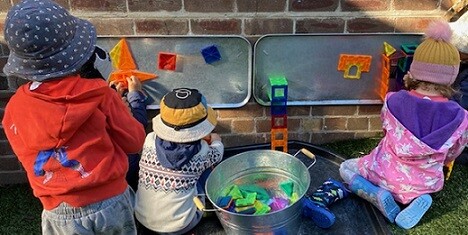 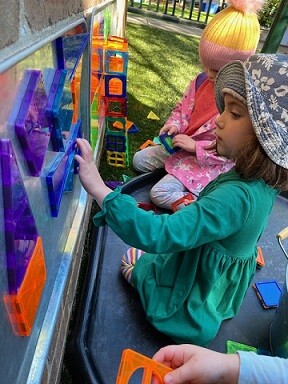 The children in Murray House infants love visiting the fish tank to see the fish. They are fascinated by them. To observe the fish, the children climb onto the stool and stand on their tippy-toes to reach the tank and to see the goldfish closely. When they finally spot the fish, they all shout excitedly with sounds and words like “sh-sh!” and “fish!”

Murray House’s educators observed the children mimicking the fish’s movement and saying “bop, bop, bop.” They saw children tracking the fish in the fish tank with their finger, and describing what they noticed as they engaged in shared conversations. Educators heard “Where is the fish?” and “There is the fish!”

This week the fish tank provided lots of learning opportunities for the children. It allowed them to learn about and connect closely to their world, and to see how the fish move, what they eat, their attributes and their environment. At the same time it supported children to develop their imaginations, and their social and emotional skill, while also creating a calming learning environment.

With a second wave of COVID-19 happening in some parts of the community, the wellbeing of children and everyone in Murray House toddlers is paramount. This means that, apart from taking extra measures to minimise the risks of spreading the virus, educators are actively promoting and embedding good hygiene practices and healthy lifestyle choices into the program. They have been regularly discussing the importance of handwashing and germs with the children, especially before mealtimes. At times, educators are challenged with the “why?” question by the inquisitive toddlers, to which they have responded “we wash our hands to get rid of germs because they can make us sick”. However, this is an abstract concept and can be hard for the children to grasp, so this week educators decided to extend the children’s understanding of germs with an experiment. Educators explained that there are germs on our hands, but we can’t see them with our eyes. They put a clean slice of bread in a zip lock bag then encouraged everyone to touch another slice of bread with their dirty hands and put this into another bag. Both bags were then labelled. Educators encouraged the children to predict what would happen to both slices of bread over the next few days. Most of the children pointed to the slice that had been touched by everyone and responded, “This one will be yucky!” When asked why they thought this, the children replied, “Because there are germs”. Educators will encourage the children to revisit and observe the bread regularly over the next few weeks and to share their observations.

This week the children also showed a strong interest in gardening after they listened to a story called The Potato People by Pamela Allen. They remembered the potatoes that they had planted a few months ago and wondered whether there would be any potatoes if they tried digging for them. With support from educators they dug up some potatoes with excitement, even though these were small. The children also said that they want to make ‘Potato People’ like in the book. Educators will continue to extend this emerging interest for children over the next few weeks. 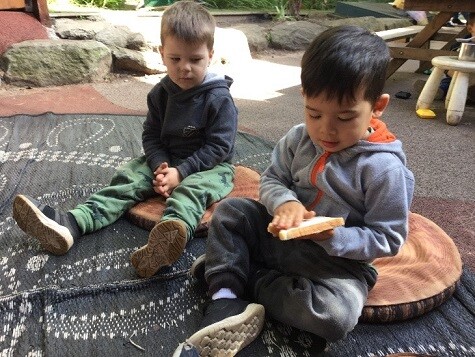 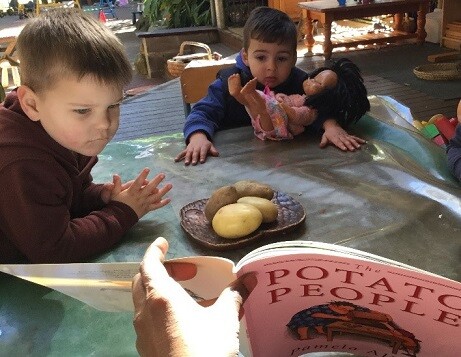 This week a group of children in Robinson House helped to clear an area for a campsite. The children suggested setting up tents, camp chairs, and making a campfire. Some of the children suggested that they could make a fire by rubbing two sticks together. Another child said that they couldn’t have a fire inside a rubber tyre, because the rubber would burn. This led to children deciding to make a fire pit with large stones from another part of the yard. They carried these carefully and kept their legs apart when they dropped them to the ground, taking care not to hurt their toes!

The educators told the children that Gorton House has a fire pit, and that if they filled out some paperwork, perhaps they could have a fire too. Everyone was very excited about this idea!

Before lunch the group read Baby Business, by Darug author Jasmine Seymour, which is a book about a smoking ceremony for a newborn baby. At first the children were worried that the baby would get hurt in the fire, but as they kept reading they found out that smoking ceremonies help to keep bad spirits away and keep the baby healthy and safe.

In the late afternoon a small group of children accompanied educator Miriam to Gorton House preschool to see their fire and learn from their experience. They were in luck, because the Gorton preschoolers were having marshmallows that afternoon! After Gorton teacher Nicky explained how to stay safe near the fire, the children tentatively went with Miriam to toast their marshmallows. Nicky and the Gorton House children taught the children from Robinson House how to get down low and to hold their toasting sticks out over the flames. One child’s marshmallow burnt on the outside, which he was very excited about! He said “it’s crunchy but gooey on the inside!” As they walked back to Robinson House, Miriam and the children could smell the smoke from the fire on their clothing.

Already the children’s interest in camping and fires has led them to scientific discoveries, learning about Aboriginal perspectives and practices, and the sharing of knowledge and expertise between different centre Houses. The children can’t wait to have their own fire at Robinson House! 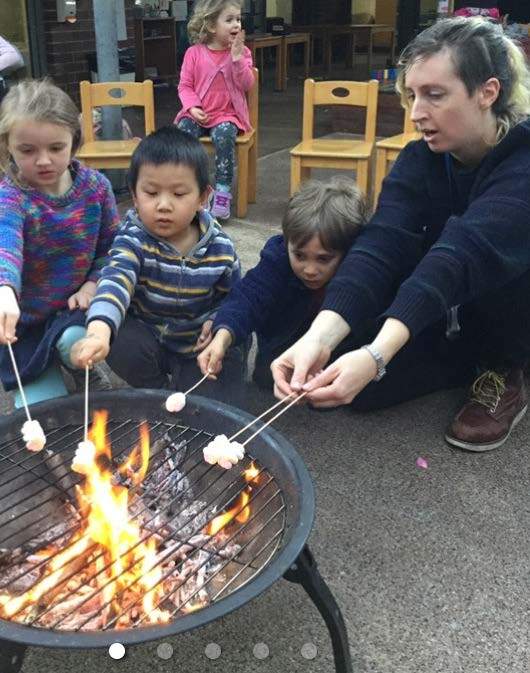