Creative art has recently been a focus in Gorton House toddlers’ programs. They children have great interest in this, and they like to participate in art experiences and try their own creations while experiencing colours.

A series of art experiences such as easel painting, sponge painting, pencil and crayon drawing have been planned and organised to support children’s interest and learning. The children also enjoy drawing with chalk on the outdoor blackboard and playground surfaces, especially on beautiful days.

This experience was inspired by some children’s sharing some crayons they found and their efforts to use these to draw on the board. Once the colourful chalk was brought out to the playground, many children gathered together, each verbally identifying and picking up the colours they liked and finding a good spot to try drawing strokes with the chalk. Most of the children drew lines downwards, which formed a beautiful picture on the blackboard. Some tried to colour the fence in pink, blue and purple. Some picked up the chalk from the box and passed them to their peers. Later on, we created some footprints on the ground. Many children wanted to help by placing their feet in a good place to trace around. We made a footprint track to follow, which was fun for children. Some children even created more prints totally by themselves, or drew a lot of circles on the ground. While engaging in these creations, the children were also developing their thinking, creative, fine motor and social skills.

As often happens in Gorton House preschool room, the children show such agency in influencing the program and this is again what happened this week. One child approached Educator Gunjan and asked “When is Ganapati, and are we going to celebrate it?” Gunjan knew about Ganapati, as her family also celebrate it. So, together, Gunjan and the child spoke to the child’s parent and shared their knowledge, whilst also making plans within the preschool room. Gunjan wanted to know most specifically how this child and family might want to acknowledge and celebrate Ganapati. Gunjan explained that the festival celebrates the birthday of the God Ganesha (Ganapati) as the God of new beginnings, and the remover of obstacles, as well as the God of wisdom and intelligence. The child and their family most value the way the festival brings the community together, with people often bringing an idol of Ganesha and then worshipping and praying together.

After some plans were made, the child arrived at preschool full of excitement, wearing traditional Indian dress and a bindi on her forehead. They very excitedly brought and shared enough bindis for the other children in the preschool room. The children were so excited to be wearing these bindis, and they frequently paused during the day to make sure their bindi was still on their foreheads.

Gunjan printed out images of Ganesha, including some that could be coloured, and the children had the opportunity to colour a page, or use the images as a guide and try to draw their own, which many did. We found that there were other children within the preschool room that also celebrate Ganapati, and they talked with Gunjan and other Educators about this. Some also talked about a special sweet that they make with their families in celebration of this festival. As they chatted about this, they made plans with Gunjan to make the sweet the following day. They sent Gunjan off with a shopping list for the ingredients needed, and planned to get a recipe from one of our families. 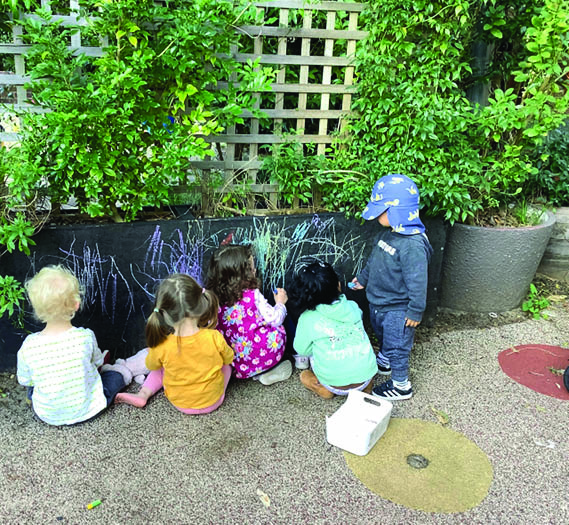 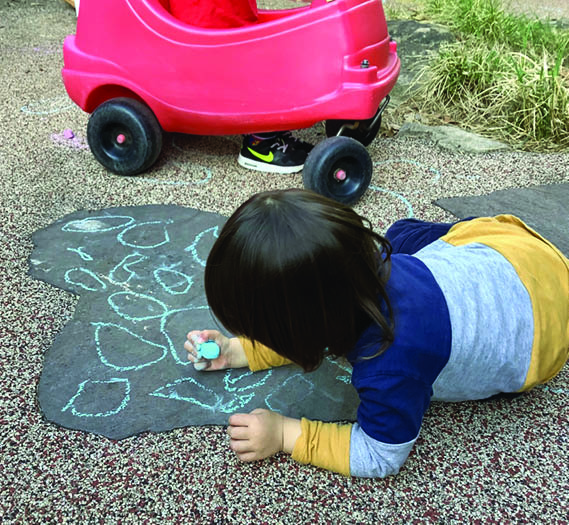 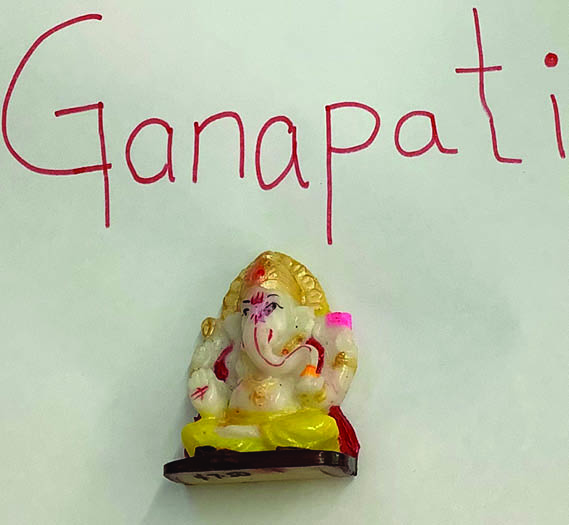 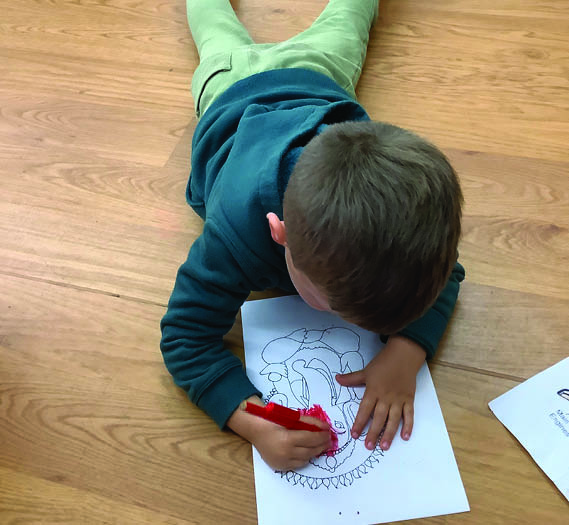 The children just love the ‘treasure ball’ activity at Johnson House! By hiding some colourful items in a ball of playdough, the children are able to work on both their fine motor and cognitive skills whilst giving their proprioceptive sense a good workout.

Put simply, proprioception is the sensations surrounding the joints and muscles to bring about awareness of the body. This is important for knowing how much movement, control and strength the muscles need to use. At the same time, the children are strengthening and coordinating all of the muscles in their hands and fingers as they work hard to manipulate and pry open the ball of playdough. Having good, strong fine motor skills will help with pencil and scissor control later on.

Colour recognition can provide children with essential learning tools in life. For example, in mathematics, colour recognition is used to categorise, sort, compare and organise. Additionally, as children learn to identify colours and use colour as a language tool to describe things, it develops and strengthens their ability to communicate effectively. 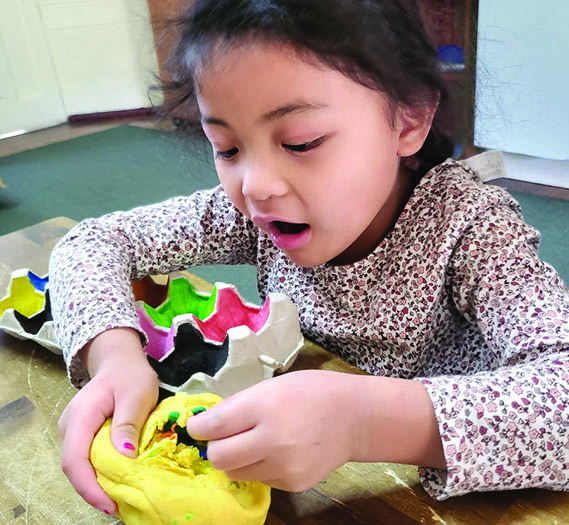 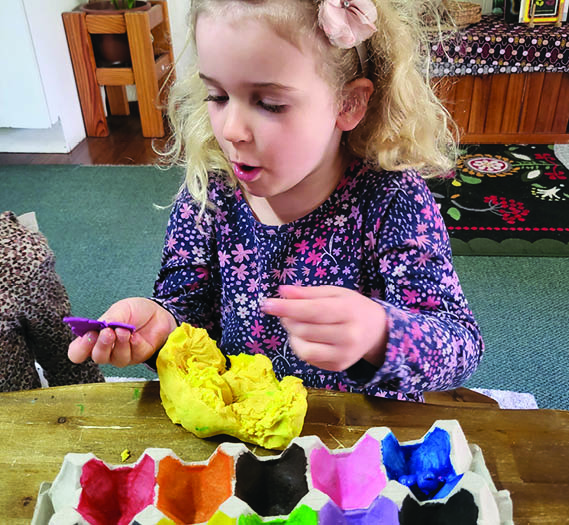 One of the ongoing interests of children in Murray House’s infants’ program is sensory exploration. Sensory exploration is a child’s way of examining, discovering, categorising, and making sense of the world. It not only assists children to develop their senses in a fun way, but also encourages them to learn about the world around them.

To further assist children to extend their interest in this area, I invited all the children in the infants’ program to join me to play with Oobleck (a mixture of corn flour and water) and sea animals this week. The children were keen to assist me to set up the experience in the yard. Some of them were happy to put the water and corn flour in the tub and to mix them with their hands and fingers to further explore sensory play. Others were keen to bring the sea animals and place them in the sensory tub, using their fine motor skills to mimic the animals’ movements.

During the experience, the children used their little hands and fingers to touch and feel the sensory materials provided. Some of the children started to notice that the Oobleck flowed slowly and hardened when on the sea animals. However, when they put the animals back in the tub, the mixture would then ‘melt’ off the animals and mix in with the rest of the Oobleck.

This sensory play experience provided children with opportunities to touch, feel, and play with sensory materials in a safe environment, and also assisted them to develop trust and understanding of this texture as it helped build position pathways in the brain.

This week’s Red Bug playgroup was another exciting day at Ashfield Park. With the sun shining and the ground dry, we were able to enjoy a fantastic day of fun and seeing our friends.

From these pictures you can see that didn’t go as planned!

Instead, the children created using their hands, turning our print making activity into a sensory experience that was full of exploration and discovery of their own hands (and hair!). We also found out that shaving cream is smooth and foamy, and that it makes great MONSTER hands to chase our friends with!

See you next time for lots of fun and learning! 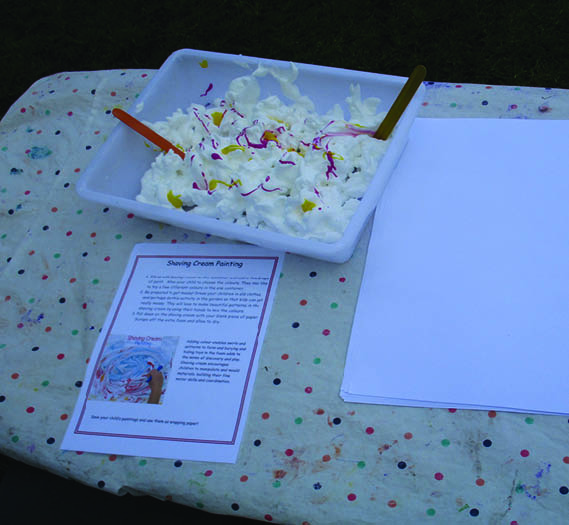 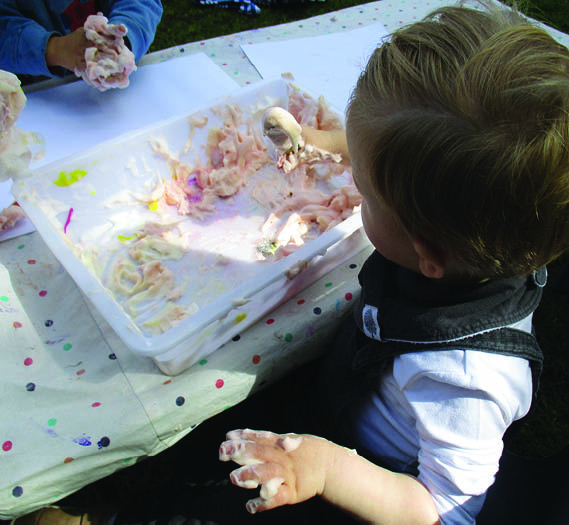 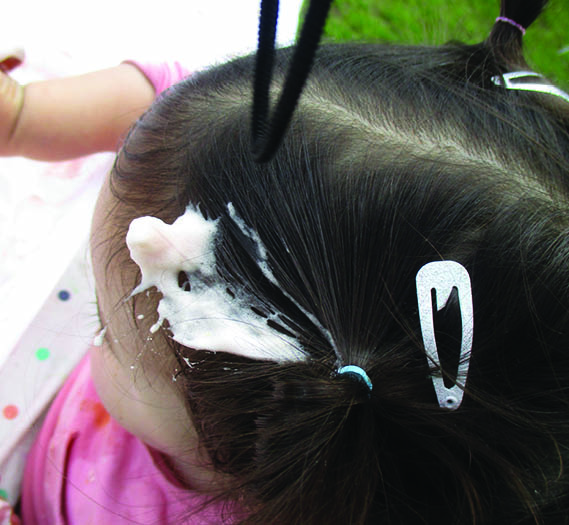 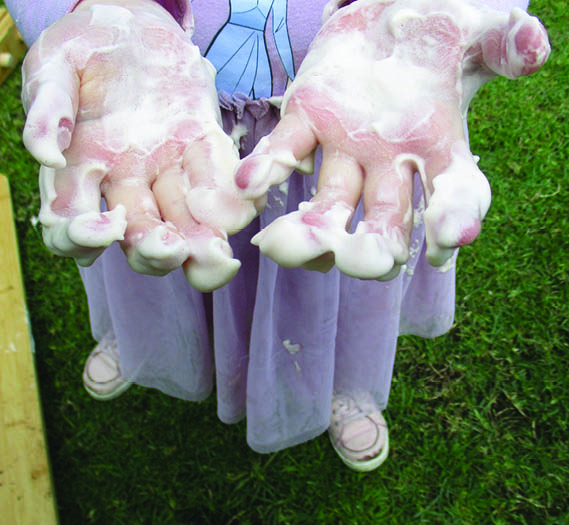