This Week at The Infants’ Home 8 November – 12 November

The children in Johnson House have recently shown curiosity about dinosaurs and volcanoes. We revisited the informative book I wonder why the volcanoes blow their tops? and we have been conducting mini volcano experiments.

As suggested by the children, we used a new recipe to make a volcanic eruption where the lava continuously flows by adding water and dishwashing soap to bi-carb soda. The children dropped red coloured vinegar solution in their own volcano replicas to create a reaction. Dinosaurs were also added into the trough with the volcanoes. This sparked discussions about why the dinosaurs became extinct. The children were introduced to the word ‘extinct’ to describe why the dinosaurs are no longer around. The children continued to re-enact what led to the extinction of the dinosaurs as they conducted their mini experiments.

Sourcing informative books for children helps them to learn more about the world they live in and to acquire new vocabulary about certain concepts. The children were able to share their ideas with their peers and scaffold their learning in relation to understanding what led to the extinction of the dinosaurs. The children made connections between experiences such as what they have learnt from movies or other books they have read. They also incorporated dramatic play in a safe way to re-enact scenes to explain why the dinosaurs became extinct.

This experience fostered the children’s skills in experimentation, as well as their fine motor skills, as they investigated cause and effect in their mini volcano experiments and transferred liquids from one container to another. 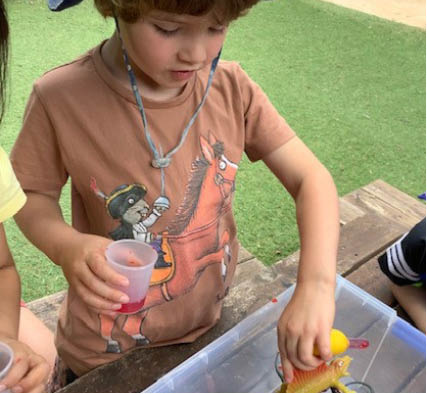 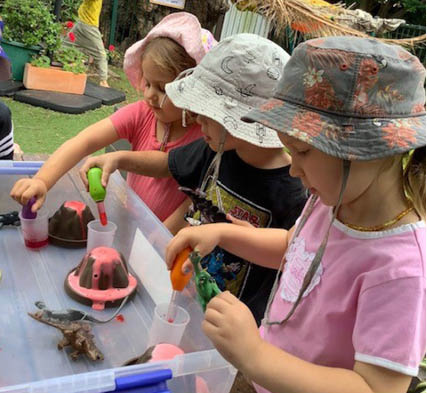