This Week at The Infants’ Home 18 October – 22 October

Many of the Educators and members of our Allied Health Team have been very fortunate in being able to attend some professional development on Embedding Aboriginal Perspectives in early childhood education programs. This training was offered by The Infants’ Home with funding from the NSW Department of Education, and was delivered by Jessica from The Koori Curriculum.

The Educators in Gorton House preschool have always striven to embed Aboriginal and Torres Strait Islander perspectives into our program, and I have been talking recently with the children about some of the new things I have learned from Jessica. I have mentioned to the children at relevant points how Jessica, a Wiradjuri woman, has shared so much knowledge with me.

I was particularly excited to learn that some Aboriginal people often use banksia cones when burning and cooking over campfires. Given that campfires are a very regular and much-loved experience in Gorton House preschool, this news was like gold! I shared this news with the children and, given I live right next to a suburb called “Banksia” (and now I understand why), there are loads of banksias growing in the area. I collected some banksia cones from a place on Bidjigal country (an area in Botany Bay) and brought them in to the centre. I told the children about the banksia flower’s various stages of growth, starting as a flower and changing until finally it releases its seeds, leaving the dry, empty seed pods.

Some of the children were most fascinated by the fact the banksia cone was a collection of wooden seed pods, and even more so that the pods were fire resistant to withstand bushfires. As the children gathered around so we could light the fire they handled and looked closely at the banksia cones and the openings showing where the pods had already released seeds. One child was determined to find a pod still closed so that he could open the pod to find the seed to plant it.

We did use the cones in the fire and saw how beautifully they glowed as they burned. We wondered if the banksia cone smoke might smoke some of the bread we were roasting to make it even more delicious. Seeing how curious about these pods many of the children were, we added many more banksia cones to the clay/art table for children to explore more closely alongside other items from nature. The children have been arranging these natural items, creating miniature bushlands and ecosystems. We are interested in exploring more deeply the lifecycles of these really fascinating seed pods.

We believe that nurturing a deep curiosity for, and appreciation of, nature and all within it, not only helps children gain “knowledge” such as an understanding of the diversity within species and habitats, lifecycles and ecosystems, but also to learn about how important it is to respect and protect these. This fosters a sense of caring about our world, and the impact we can have based on the decisions that we make. We also recognise that we can learn so much about caring for the land and sustainability from Australia’s First Peoples, who traditionally ensured that their every action and way of life was in close harmony with nature and reflected respect for nature. 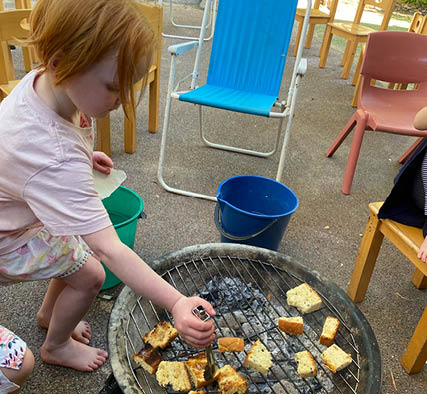 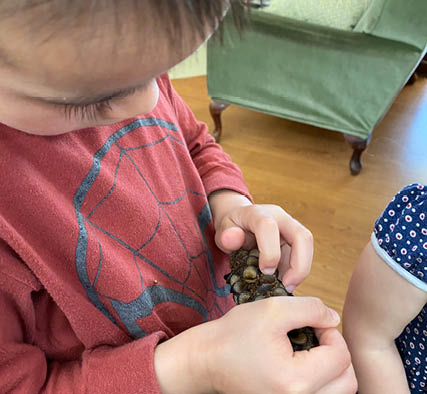 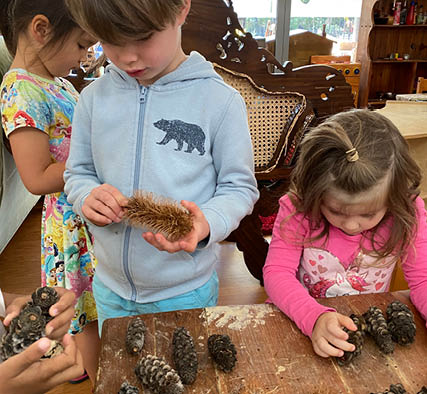 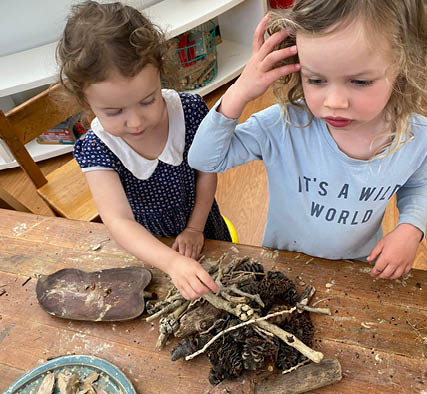 To follow up on the children’s interest in sensory play in Johnson House, as well as in fairies and the Indigenous story ‘Lilah’s Fairy Friend’ by Toni Hough, the children have been keen to make their own fairy soup. Native flowers such as grevillea and bottlebrush flowers that are found in the book were sourced and added to the experience. The flowers were added into the water trough and the children were provided with some bowls and scoops. The children touched and smelt the different flowers, describing their different attributes. They found the bottlebrushes ticklish, the bougainvillea to be soft, and the grevillea to be spiky but very soft. They thought the bottlebrushes smelled fresh.

We spoke about how the flowers are a source of food for native birds such as rainbow lorikeets. This experience fostered children’s fine motor control as they practiced scooping, snipping and stirring the flowers and the water in their own containers. They used their creativity and imagination to make their own recipes using natural materials and re-enacted some familiar scenes in their pretend play. The children also made connections to their previous learning such as about mixing colours and sinking and floating experiments.

This was also an opportunity to incorporate native flowers in children’s play and to talk about their diversity and interdependence with the native birds. The children continue to make connections in their natural environments as they see these flowers in their own gardens, in parks or on their way to Johnson House. 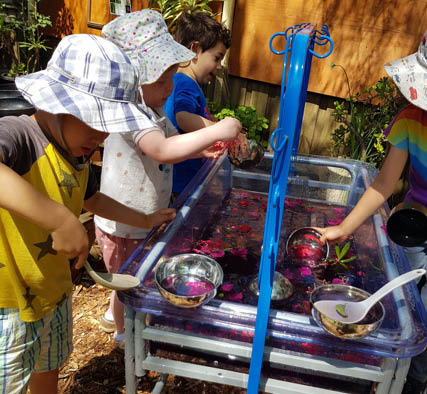 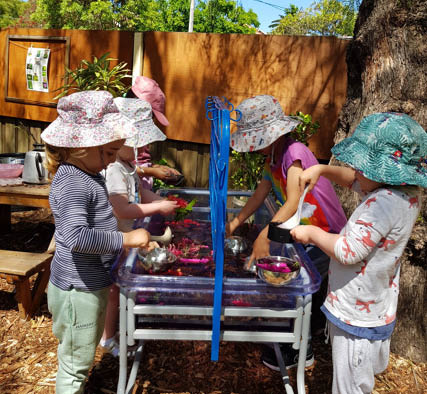 The children couldn’t wait to have a turn at pressing the button of the bubble machine, which would then release a flurry of bubbles.

As they waited to have their turn, they were encouraged to say, “It’s my turn!!”. Then they pressed the button, and ran away chasing the bubbles while also honing their hand eye coordination skills. 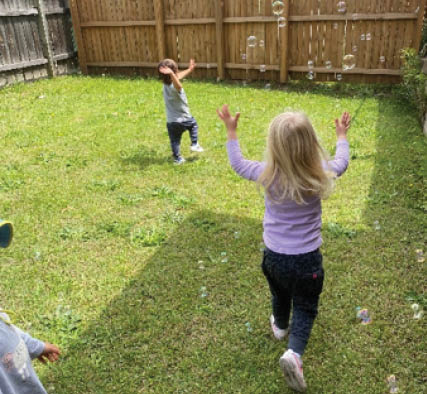 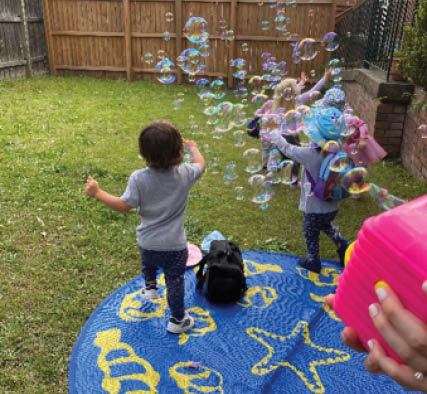 Ebony, an Educator in our Randwick hub, recently embraced our Family Day Care Manager Janice’s weekly learning library, which was based on the book ‘Lily and the Fairy House’ by Jane Tanner. The children created their own fairy garden and made potions incorporating flower petals that they picked from the garden. The felt fairy garden reflects the Steiner philosophy which is embedded in Ebony’s service’s program. 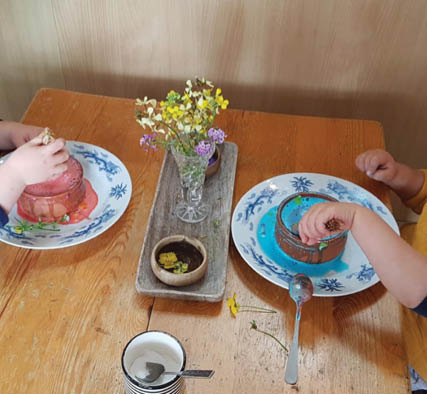 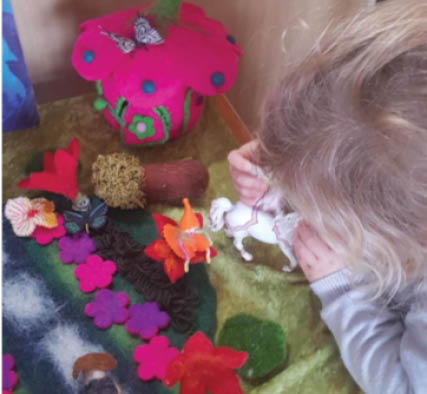 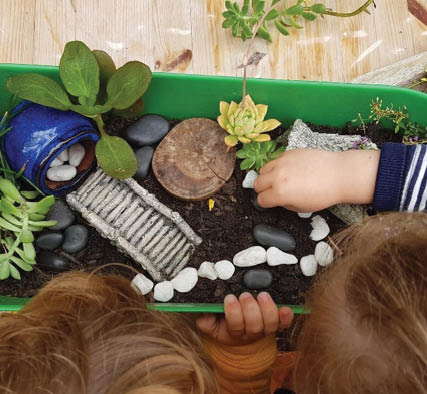